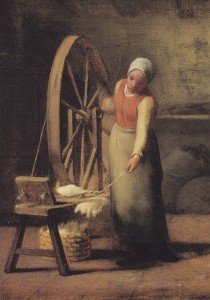 My daughter loves the fiber arts. She knits, crochets, weaves, and spins.

Therefore she looked forward to seeing the movie Maleficent because, surely, she thought, they would correct the heinous error of depicting Sleeping Beauty pricking herself on the distaff of a foot-treadle machine.

The rage when she saw Disney repeat the stupidity of the original was amusing to behold. I made sure I drove home, so that her rage would not in any way compromise our safety.

It’s as though you said that Samson could only die when his hair was shaved, and they proceeded to cut off his hair with a piece of rope.

The spindle of the original story was the long spike on a great wheel, sometimes known as a walking wheel. The great wheel causes the spindle to turn rapidly. You use this twirling spike both to twist the thread and also to wind the thread onto the spike.

The reason the spike gets so sharp is the friction of the fiber slipping over the end of the spike when the fiber is held out from the spike, to give the thread its twist. A well-used walking wheel will become well-polished and wicked sharp.

The one-sentence summary of Disney’s Maleficent is:

A vindictive fairy is driven to curse an infant princess only to realize the child may be the only one who can restore peace.

From the movie posters and trailer you get that Maleficent is the main character. So you know she’s going to turn out to be the secret hero of the movie somehow. The Princess Aurora looks pretty nice in the promos, so it’s unlikely she’s a baddie.

All the men in this movie are baddies, unless you count the sometimes human raven as a man or the tween Prince as a man. The actual human males in this movie are one-dimensional and (except for the Prince) they are pretty much evil from the get go.

There was such a missed opportunity by failing to focus on the destruction of the spinning wheels. How the heck do you have fabric if there are no spinning wheels? This is a huge impact on society, destroying one of the major products women created in those days.

Maleficent is a strong character in this film, but she is made strong by destroying the credibility of every other female in the story, other than Aurora. Aurora’s mother loses everything: father, choice of spouse, daughter, husband’s care, and eventually her life. She gets almost no screen time, and precious little exposition. As for the three “good” fairies, they are only good as comic relief, and not very good comic relief at that.

If you watch Maleficent, think about the parents you see in this film, then re-watch the original Disney Sleeping Beauty and check out the comparatively rich characterization of the parents involved. The child in Maleficent is treated as a commodity. You don’t get the sense that any of her parents or guardians actually cares for her. The movie makers didn’t have to do that to effect their plot twist.

The character who becomes King Stefan is emotionally manipulative and causes both emotional and physical harm throughout the movie. He is determined to thwart Maleficent. Given the “magic” of this world, he could easily have defeated her. But not only is he evil, he is apparently stupid.

The visuals on this movie are strong. And there are plot points that will delight some people. I’m not vehemently sad I watched it. But it could have been so much better.

And they could have gotten the bit about the spindle correct…

8 thoughts on “The Lost Arts of Womanhood: Review of Maleficent”