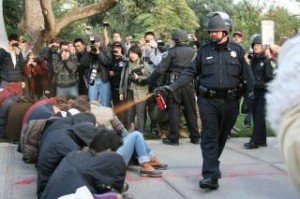 You may have seen the photo above. It was taken during a protest at UC Davis, when police tried to get Occupy protesters to move. They decided that the best course of action would be pepper spray these peaceful protesters. Here’s an idea: just let them protest, and eventually they will move on their own.

As a tea party supporter, I want to point out that my political goals (more on that in a second) are in many ways not aligned with the Occupy protesters. But I condemn police brutality, and I support the right to peaceful protest.  I would also point out that this is not an isolated incident:  many other cases of police brutality are displayed clearly here.  The Constitution clearly protects the freedom of assembly.

The reason the Constitution protects freedom of assembly is that the government the colonists faced in the 18th century did not support the freedom of assembly.  With a keen eye to the natural rights of life, liberty and property, the colonists felt that their liberty was being assaulted by an oppressive British government.  The British government was less oppressive than most others at the time, but for these colonists certain rights were inalienable and non-negotiable, and they stood up for their rights in ways most of us continue to admire today.  But many of us do not realize that all man-made governments are oppressive unless they recognize natural rights.  So, calling on more government to solve the problem of oppressive government is a bit like an 18th century doctor using leeches to heal an internal hemorrhage.

It is the partnership of government and the private sector, corporatism, that has created our current mess.  Bailouts are only granted to corporations with political connections.   Politicians will not bail out companies where they have nothing to gain.  So, if your concern is Wall Street corruption, you need to blame a)the corrupt politicians (ie, the government) who vote for the bailouts along with b)the bailout-accepting Wall Street millionaires sipping their lattes while you cannot get a job.

The solution should be obvious:  do not allow the government to bail out anybody.  If you make bad investments, your business will fail.  This creates a level playing field with true equality of opportunity.

So, let’s say your problem is equality of result, meaning there are just too many rich people who are not giving their money to the poor.

If you think rich people should give more money to the poor (and I do), you really have three choices.

1)You can exhort them to give more to the poor.  (This has actually worked over the years:  think of all the rich people who have left their fortunes to good causes, from the Fords, to the Nobels, to the Rockefellers and people like Bill and Melinda Gates who are alive today).

2)You can convert them to the Gospel, and many will have a change of heart and start tithing, giving fast offerings and contributing to other charities.

3)You can use the government to force them to give money to the poor, or they will be put in jail by people carrying guns, ie, the government.

Unfortunately, many people in the Occupy movement seem to think that number 3) is the best choice, while I tend to favor number 2 first and foremost and number 1 occasionally.  But the problem is that once you empower government to do things like take money from greedy rich people, it is only a matter of time until that same government starts pepper spraying and beating up protesters.

The purpose of good government is to protect life, liberty and property (D&C Section 134:2).  Government should protect the country from foreign invaders, protect private property from thieves (the police), protect people from fires (the fire department), set up a civil court system so people can settle disputes in a peaceful manner, and protect people from harming other people and punish those that do (the police and criminal courts).  If people want to hold a peaceful protest, the policy of a good government should be, as much as practical, to leave them alone and allow them to protest.  My personal opinion is that in most cases protesters will go away if you allow them to express themselves.

I hope we can agree that protesters who are violent or who are destroying property need to be stopped.  So all police action is clearly not abusive.  But the police need to take extra care not to allow themselves to violate the liberty of people who want to peacefully demonstrate.

But here is the problem with big government: it becomes less accountable to the people is supposedly serves.  Good government, on a limited, local level, will hopefully be open and responsive to citizens in the community.  It is difficult to imagine the local sheriff of a small town beating up the people he sees every day at the coffee shop.  But big government, with huge bureaucracies in far-away capitals, inevitably creates distance and resentment between citizens and public servants.  Big government public servants lose touch with their constituents and forget who is paying their salaries.  This is why the clerks at the DMV and the federal government offices are usually so bored, inefficient and hostile:  they have forgotten that you are the customer and the boss.  And when you give big government employees guns, and then ask them to carry out tasks involving security, they very often make huge mistakes (think Waco and the Branch Davidians).

17 thoughts on “The government is oppressing me, so I want more government”