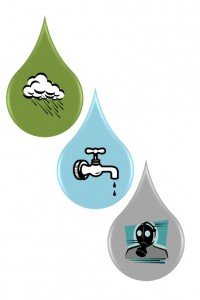 You’ll likely suppose it is arrogant of me to use “The Compassionate Mormon” as the title of this series on water. 1 We usually think of compassion in terms of taking meals to the sick or bearing the burdens of those who mourn.

The definition of compassion is:

n. a feeling of deep sympathy and sorrow for another who is stricken by misfortune, accompanied by a strong desire to alleviate the associated suffering

I argue that tens of millions of my brothers and sisters die every year due to issues related to lack of adequate water. I have a strong desire to do what is in my power to alleviate the pain and suffering those premature deaths cause.

Life in this world should be a joyful adventure in a land of peace and plenty, not a destitute hell of want. We must understand how water is consumed before we can hope to understand why water will be a limiting resource that causes war, death, and hunger.

The Well of Water: Blue Water 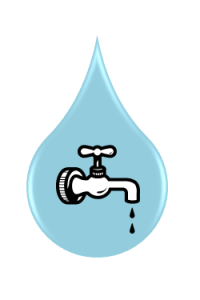 Blue Water is the water that comes from lakes, rivers, and wells – the water we “pay” for.

When I ask people how much water they think they use, most people think only in terms of the amount of water they drink. Occasionally they will also remember that they need water to wash dishes or flush toilets.

If they are the homeowner in their family, they will also likely realize that any water they use to water their landscaping “counts.” They may even remember the number of gallons their water bill says they used that month.

Traditional thinking in the United States maintains that 70% of water withdrawn from freshwater sources (lakes, rivers, wells, aquifers) goes to agricultural uses, 20% goes to industry, and 10% goes to municipal use. 2 In desert areas like Utah, as much as 60% of that municipal water goes to irrigating landscaping. 3 So golf courses in the desert, for example, account for some fraction of the 6% of the total blue water used to support human activities.

Because most of us in the Western world can simply turn on a tap and get as much clean water as we need, we forget this resource is limited. We’re a bit like the young person who pays using a credit card, not understanding that you can’t reasonably spend more than is earned, at least not for long.

If we sustainably use our blue water resource, then the level of water in our aquifers will stay level from year to year. It’s like a family who spends no more than the amount of money they earn from year to year. However there are many aquifers in the world where the water table is dropping quickly, particularly arid “breadbaskets”. 4 Overpumping in the North China Plain, which produces half China’s wheat and a third of its corn, has largely depleted the shallow aquifer, forcing well drillers to turn to the region’s deep fossil aquifer, which is not replenishable. 5

The Windows of Heaven: Green Water 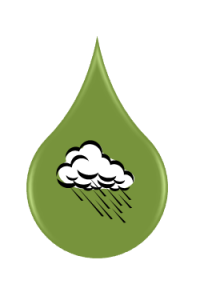 When we try to figure out how much water is required to produce a crop (or keep a yard or golf course green), we need to factor in this “Green Water” if we are to be complete. 6

Green Water is like the manna the Hebrews received during the years they wandered between Egypt and Israel. 7 This rain water is vital to life, but cannot be stored. This water that remains in or on the soil will eventually evaporate. If that soil is planted, the water can evaporate to good purpose by evaporating out via the small holes in leaves that draw water and nutrients into a plant. 8

The amount of Green Water required by a crop is closely linked to the amount of acreage required to grow that crop in a given climate.

One reason we need to understand Green Water is to prepare for the impact when we don’t get as much rain as we are expecting. This can occur due to natural variations in the weather or because of climate changes. The climate changes projected by the scientific community include arid regions becoming even more dry and humid climates experiencing volatile weather patterns of alternating drought and intense rainfall.

It takes a certain amount of water to produce our daily bread, if you will. Understanding how to assess the impact of future shifts in Green Water will help us maintain the ability to continue enjoying that life-giving “daily bread.” 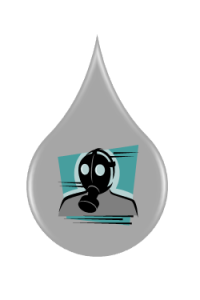 Gray Water, in the Water Footprint context, is the pure water required to dilute pollutants to clean water standards

In the movie, Erin Brokovich, actress Julia Roberts watches a female lawyer raise a glass of water to her lips. Julia comments:

By the way, we had that water brought in specially for you folks. Came from a well in Hinkley.

The real Erin Brokovich helped the residents of Hinkley win a $333 million settlement from Pacific Gas & Electric (PG&E) for contaminating their ground water with hexavalent chromium, a potent carcinogen. In the movie, the female lawyer refuses to drink the water, once she knew it came from the town PG&E claimed wasn’t being harmed.

The peak levels of hexavalent chomium in Hinkley came in at 20 parts-per-billion. The proposed safe level or “health goal” for that chemical is 0.02 parts per billion. 9 So a cup of water from a Hinkley well would have to be diluted by 1000 cups of pure water to be rendered safe.

In similar fashion, human use of fresh water often includes adding something that pollutes the water. Run-off from human water use may contain pesticides, herbicides, oil, salts, detergents, medicinal chemicals like those used for birth control, and fecal matter. This is runoff you’d want to dilute with plenty of pure water before you’d consider drinking the resultant fluid.

Our industrial background teaches us that crop production can be increased by adding enough artificial fertilizer and protecting the desired crop with enough pesticide and herbicide. Even without pesticides and herbicides, fertilizer leaches nutrients like nitrate and phosphorus into local waters. When this happens, local waters can become “eutrophied.” If you know Greek, that sounds like a good thing, since it means “well nourished.” But when there is too much nutrient in waters, algae populations bloom, removing oxygen from the water and killing fish and other wildlife.

Nitrate (N) and Phosphorus (P) are a particular problem because of industrial practices. Less than a hundred years ago German chemist Fritz Haber invented a way to artificially produce ammonia, which is then transformed into nitrate to fertilize plants. 10 At the time, Haber’s invention was praised as a significant mechanism by which Malthus’ predicted population implosion could be averted. 11 In our day, however, the amount of “bioavailable” N has double, and bioavailable P has tripled. 12 Use of artificial fertilizers is increasing the “load” of all waters to the point where we can’t dilute water back to clean levels that support life.

None of this is a problem if we don’t care about fish, manatees, or people. 13 We may insist we don’t really care, and continue to consume foods that require waters be polluted to produce the food for the price and in the quantities we desire. But would we be willing to drink the water from those communities? If we would hesitate, how can we call ourselves compassionate while our actions condemn others to conditions we wouldn’t endure?

“I said again: ‘I seem to find no place in holy writ where God has said, “I give you title to this land unconditionally. It is now yours to give, to have, to hold, to sell, despoil, exploit as you see fit.”

Armchair scriptorians may object, saying “God says the earth is full and there is enough for all to share.” I would urge such to read the entire passage:

For the earth is full, and there is enough and to spare; yea, I prepared all things, and have given unto the children of men to be agents unto themselves.

Therefore, if any man shall take of the abundance which I have made, and impart not his portion, according to the law of my gospel, unto the poor and the needy, he shall, with the wicked, lift up his eyes in hell, being in torment. 15

There can be enough for all to share. But we’d better start actually sharing and paying attention to the amount of this earth’s resources we are taking from the common pool.

13 thoughts on “The Compassionate Mormon: Water 101”