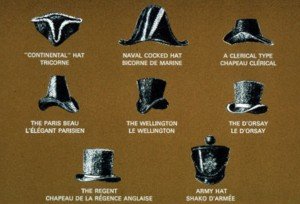 Popular styles of beaver hats circa 1830

[In homage to Bruce Nielson, I am dictating this post using Dragon dictation.]

Don Bradley wrote an intriguing paper titled Piercing the Veil: Temple Worship in the Lost 116 Pages. In the final section, Bradley discusses a lost story about how the interpreters, or Urim and Thummim, were found.

According to Fayette Lapham, Joseph Smith related some of the stories that were contained in the book of Mormon prior to publication. In one of these stories, the Liahona led the travelers to a curious set of implements. Unable to determine what these implements were, the man who found them (presumably the high priest of that time), took them into the tabernacle and present them to the Lord. The Lord tells the man  to cover his head with skins. Once he had done so, the high priest was able to see the spiritual. And according to the story, after this point Liahona stopped working.

Now that the high priest (probably the original Mosiah, 1 as this story describes a migrating people before the portion of the plates that described events in the current book of Mosiah) had the interpreters, or the Urim and Thummim, he no longer needed the Liahona. Thus we do not see the Liahona used as a guidance device in the rest of the book of Mormon narrative. Despite this, the Liahona is one of those relics which is passed down along with the sword of Laban and the interpreters.

Don Bradley then talks to us about the Old Testament, about the importance of skins in temple worship. “Badger” skins in particular were used to veil the faces of those who had seen God. One of the veils of the temple was constructed of these skins. [Mary Anne points out that the term translated as “badger” in the Old Testament appears to actually refer to some animal associated with the sea, such as a dolphin or dugong.]

Joseph, having translated the first 116 pages of the book of Mormon, was aware of this: that to truly see with the aid of these interpreters, the Urim and Thummim or even just his seerstone, the process would be aided by covering his face with skins.

In those days, beaver skin was a common commodity. Hunters and trappers exploited the American wilderness specifically to find beaver. The pelts were used for hats, until silk hats became the rage in the 1830s.

I find it interesting to consider where Joseph’s hat came from. Was this merely a yokel’s hat? Or was it a beaver skin continental hat, a simple farmer’s hat, or one of those tall stovepipe things. I can imagine it would’ve taken some sacrifice for Joseph to obtain a beaver skin hat. But if he was attempting to do as the book of Mormon narrative itself instructed, he needed to put the interpreters in a beaver skin hat and place this over his face, as had been done in the initial narrative of the book of Mormon which we no longer have, as had been done in the Old Testament in the tabernacle, as had been done when Moses descended from the mountain and needed to shield his face to hide the glory that remains from his visitation with the Lord.

Recent depictions of Joseph translating the book of Mormon by means of putting his face in a hat are entirely disturbing to modern sensibilities. As I’ve mentioned before, most of these drawings and cartoons make it look like Joseph is vomiting into his hat.

And yet if we even reach only so far as to access the imagery in JK Rowlings’ Harry Potter series and think of the Pensieve, we see that putting one’s face into an implement that allows vision does not have to be a stupid disturbing picture of a man squatting on the step bent over as if in pain.

Further, if we consider that veiling one’s face with skins specifically in order to use interpretive devices was a long-established practice described in both the Bible and lost 116 pages, then to imagine that this is the manner in which Joseph translated the plates ceases to be odd and off-putting.

I would love to see someone depict the scene in a manner that reflects the ancient origin of the practice.

[Update: Pat Chiu, having done her research, determined that Joseph owned a beaver hat with a “top hat” sort of profile, that such hats were used by men both winter and summer. The kind of yokel hat often depicted in other images (South Park, various Dialogue illustrations) would have been a straw hat. Being a cool person, Pat apparently includes this diagram in a tiny replica of the gold plates she originally made for her grandchildren when they get baptized, showing them various scenes from church history, such as how Joseph translated the plates by looking into a hat with the plates at his side covered by a cloth. She also makes them for others at request at goldenplatesreplica.com. Excellent.]

35 thoughts on “The Beaver Skin Hat: How Joseph Interpreted the Plates”