Having a Master’s Degree in Teaching, I spend a lot of time studying different teaching methodologies, both in and out of the Church.  In doing so, I’ve recently constructed a typology of major methods of core teaching methods used by instructors I’ve observed over the years.

It all ties into my depiction of a lake or ocean below.  Note, I have a variety of degrees, none of which are in the fine arts…. 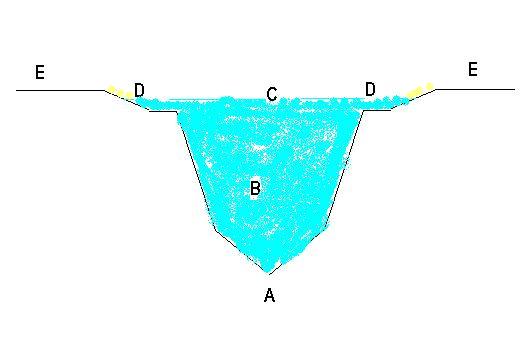 Here we have a body of water. It represents the knowledge/truth available to mankind. For my legend, we have different representations.

The goal is to reach a level ‘A’ of knowledge in the subject (religion, science, etc).

The methodologies fall along these lines.  ‘B’  shows a method where the instructor goes deep into the logic and structure of the data available.  This differs very much with ‘C’, also known as the “water skipper”, because such an instructive method only touches briefly on the surface, and then skips to the next topic.

These two methodologies explain the difference between how Japan and USA teach math.  The Japanese will pick a math theme and focus on it, sometimes for weeks.  The students learn in depth how to understand the material, and can often take that information and expand it to other deep areas of knowledge. Meanwhile, USA math skills are often very shallow, skipping along the surface, expecting the students to pick up the deeper stuff later on in another class, or on their own.  From the USA’s woeful standings in the world concerning math knowledge of students, we can determine that ‘C’ is a poor methodology.

Method ‘D’ has two types in it: those who only wade in to their knees, or worse, who only stay on the sand and dig there.  At most, they offer milk, which is a good method for new beginners.  Such is important for those in the early grades of school, or perhaps a Gospel Essentials class.  However, to remain there is to remain extremely ignorant of the subject matter.  Eventually, one needs to learn to swim/skip on the water (C), and later dive (D).

Method ‘E’ is not really a method, but it is a common action in teaching: going totally in another direction.  We’ve all had teachers that go off the reservation, talking about their sports achievements rather than the material.  In a Sunday School class, it may be the person who wants to talk primarily about speculative issues.

I once had a college class on the computer programming language Pascal. The instructor did not like the language much, but was totally gaga over another language, ADA.  So, he only talk for 5 minutes on Pascal, and then spend the rest of the time on ADA.  The book was a useless book, and he was never available for phone calls to answer questions. Needless to say, it was a total waste of time and money for me since he didn’t really teach me what I paid him to do  (I did end up putting in a complaint with the department head).

I see the Gospel Doctrine classes in the church as normally being a ‘C’. The manuals are designed to teach methods ‘D’ and ‘C’.  Since we do not have a professional staff of instructors, our lay teachers tend to only have an understanding based upon methods ‘C’, ‘D’, and sadly ‘E’.

‘E’ becomes a danger, because we will get an instructor feels there is more to the doctrine than what ‘C’ offers (and they are right). However, speculation does not equal doctrine, nor depth of doctrine.  It tends to lead us further away from the real objective.  While ADA may be a programming language, it is entirely different than Pascal.  So it is with speculation and doctrine. They both are things to be taught about the gospel, but when we’re to focus on doctrine, we should not replace the doctrine with speculation.

‘D’ is necessary, as noted, for Primary and Gospel Essential classes. However, many of our adult classes remain in that realm.  How often has the priesthood manual been read in front of the class from beginning to end by the teacher. It needs to real preparation, just the basics of literacy to read.

Only in moving to a ‘B’ (advanced study) and later ‘A’ method (expert study) can the student get detailed knowledge of the material, and become an expert herself.

So, if I were to re-work the adult Sunday School manuals, I would first stop the piecemeal lessons they now provide. They offer only water skipper teaching.  Second, I would consider changing the structure towards themes. Imagine spending a month studying “faith and hope”, the next month  studying “charity”, etc.  How about discussing tithing as a preparatory commandment for consecration, rather than as a stand-alone commandment?  I can imagine some excellent discussions on themes of “justification” and “sanctification.”  I personally think we could spend a month in Sunday School on each of those topics.  Suddenly, we move away from USA math methodology to Japanese methods.

This would also reduce the amount of ‘E’ speculation going on. When the material is in depth, doctrinal, and engaging, there is little reason to look beyond the mark.  For our failing schools, it could regenerate interest for both teachers and students.

What do you think of this?  and Am I leaving out any methodologies or concepts?

7 thoughts on “Teaching Methodologies for Church and School”