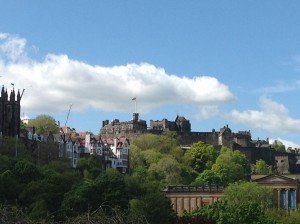 This past week my family traveled to Edinburgh, Scotland, to spend time with my husband’s father, who was born and raised in Edinburgh. Though we hope to have many more years associating with “Brother Stout,” he is in his eighties now. So with camera and tape record in hand, we toured the tenements where his people lived, the fields in which he would play as a boy, calling up to his Mum for “a piece” with jam or cheese, and the illustrious prep school where a scholarship allowed him to attend classes past age 14. 1

In addition to these spots of interest primarily to the family, we toured the rest of the city – a delight for various reasons, providing insight into both general history and Mormon history. 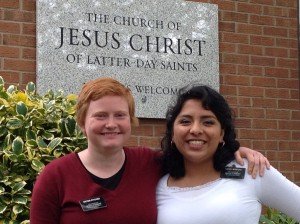 One of the first things we did was attend church services in the Edinburgh Ward. I particularly enjoyed speaking with Sister Pitcher (Smithville, Utah) and Sister Montoya (Mexico City, Mexico). We were excited about the announced visit Elder Holland will be making to Edinburgh, broadcasting from that chapel to the UK/Scandinavia region in a few weeks. But Sister Pitcher was sad – this will be the second time she will be leaving a place right before Elder Holland will be speaking in person (the first time was his speaking in the MTC right after Sister Pitcher left…).

Talking to the various members, we also met Jimmy Thompson, who had been a Sunday School pupil to my daughter’s great-grandmother. 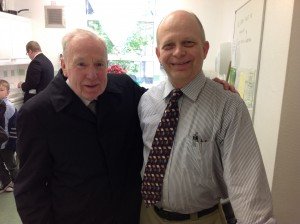 It’s a small world, this, where you attend meetings based on the internet and find someone who interacted with your departed ancestor. It was a reminder to me that those we interact with in Church may well be related to us in unknown ways.

Din Eidyn – the Fort on the Slope

Edinburgh (pronounced Ed’n burrow) is near the oldest known human presence in Scotland, dating to roughly 8500 B.C. near the oyster-rich waters sourth of the Firth of Forth. Once the region became sufficiently settled for attacks to be a problem, people took refuge on the ancient volcanic mountains further inland. One of these is now known as Arthur’s Seat, where Orson Pratt dedicated Scotland for the preaching of the gospel. Another is the ancient mountain on which Edinburgh Castle now sits – a basaltic and rocky prominence that protected the land to the west from glacial erosion, producing a sloping ridge leading from the valley up to the edge of the ancient volcano. 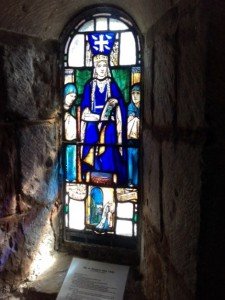 In 1072 a young woman took shelter in the Firth of Forth from a terrible storm in the North Sea. She was Margaret, eldest child of the now-dead heir to the English Crown. 2 Margaret brought the practices of the then-modern Roman Catholic Church to the court of Scotland. Her husband (King Malcom III) built Dunfermiline Abbey for her. Her son David built a stone chapel in her memory, the oldest surviving building in Edinburgh, and also established Holyrood Abbey at the base of the slope (now also site of the palace of Queen Elizabeth II in Edinburgh). FWIW, Holyrood is pronounced like Hollywood, but with an “r” instead of the “w.”

Margaret had an enormous influence on Edinburgh, which means by extension that she had an enormous influence on England, as Edinburgh would evolve to become the pre-eminent center of learning in the world in the 1800s. You can’t walk the streets of Edinburgh without coming across the birthplace or school of some intellectual or social luminary – Hume, Alexander Graham Bell, Arthur Conan Doyle, Joseph Lister, John Knox, and King James.

Prior to the advent of in-home plumbing, a household in Edinburgh would only use 2 gallons of water a day, and that was for cooking. Waste was collected in two buckets – one with liquid waste, which would be carefully stored by the community and aged for various uses (dying cloth, cleaning clothes, flavoring ale) and one with solid waste, which would be tossed out into the narrow streets of the medieval city where household pigs would be set out under supervision to consume the waste, recycling it back into a useful form. Eventually Edinburgh passed the “Nastiness Act” which stipulated that waste could only be tossed out between 10 pm and 7 am. The person tossing the waste was supposed to call out “Gardez l’eau!” meaning ‘watch the water,’ which became corrupted to “Gardy Loo!”

As part of the schedule enforced by such things as raining solid waste and short winter hours, Edinburgh is even now a place that closes up at 5 pm, except for the pubs.

Margaret brought monogamy to Edinburgh (and thence to the English realm), but monogamy wasn’t always observed in fact. The most notorious case of polygamy in Edinburgh involved Deacon Brodie, a respected man who allegedly had two extra wives in the shadows. To support this excess of family responsibility, Brodie would go out under cover of night and burgle from those he did legitimate business with in daylight. When his crimes were discovered, Deacon Brodie was executed.

Of interest to Mormons, this polygamous tale of Deacon Brodie would have been recounted to Orson Pratt during his 1840-1841 mission to Europe. To understand the horror Brodie’s behavior inspired, it is useful to know that the story of Dr. Jekyll and Mr. Hyde is derived from the true history Deacon Brodie, a science-fiction midrash of actual history, if you will.

Edinburgh was home to the first medical university associated with a clinic. An understanding of the human body was required, but bodies were in short supply. This inspired a trade in bodies, with body snatchers raiding graveyards for newly-interred corpses to earn $45,000 (in 2015 dollars) doctors were willing t pay for a fresh corpse. Grieving families would hire guards to ensure their loved ones had a chance to rest in peace until decomposition had removed the risk of “resurrection” for medical purposes. Others would at least temporarily inter their dead in walled areas locked under iron grates, as the guards tended to be ineffective (e.g., often killed).

Two men, Burke and Hare, improved upon the gravedigger’s trade by murdering unknowns, thereby able to deliver freshly dead corpses to their customer, Dr. Knox. When discovered, Hare testified against Burke. Burke was executed, his body in turn delivered to the medical college for dissection, where it can still be observed. 3

Edinburgh is important to Mormonism as the birthplace of Arthur Conan Doyle, who in Edinburgh learned the techniques of observation he would incorporate into his fictional detective, Sherlock Holmes. Edinburgh provided a rich background of stories from which ACD could concoct gripping tales. But Sherlock Holmes’ initial success, and therefore the detective’s success as an enduring franchise, is based on the initial novel, set in the exotic realm of America’s outlaw territory, Utah, and a Mormon theocracy that trafficked in women, enforcing its will by means of murder. Thus Arthur Conan Doyle used the seamy tales of his native Edinburgh, slapped on a dash of “Mormon” paint, and thus launched one of the most beloved fictional characters of all time. 4

Ultimately, however, what matters is not the cartoon of Mormonism conveyed in books and shows of those outside the faith. It is the individual faith and lives of those inside the faith that will ultimately matter. And that faith is captured by Jimmy Thompson and Sisters Pitcher and Montegna, among others. It is the faith of a devout Scottish mother who insisted the family relocate to Utah rather than Australia after the war, so her boys could find Mormon wives.

8 thoughts on “Stories from Eidyn (Edinburgh)”