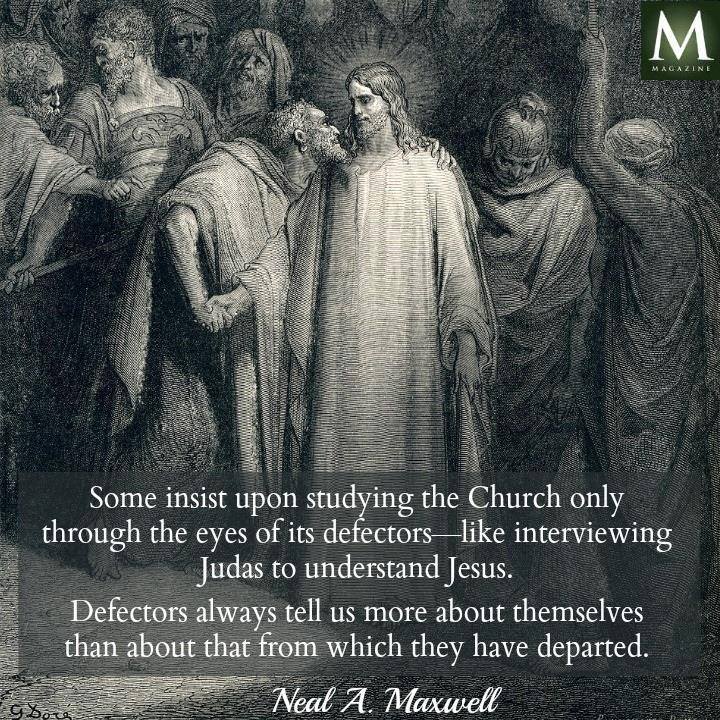 Neal A. Maxwell’s talk “All Hell is Moved” from 1977 seems to be starkly prophetic for our times. I would like to highlight some of the most interesting points.

The theme of my address comes from a prophecy in President George Q. Cannon’s speech given in the Tabernacle in May of 1866. President Cannon spoke of the generations that had passed before the restoration of the gospel during which the adversary was indifferent and unconcerned with regard to the fractious religious movements among mankind which were not based upon the fulness of truth. However, President Cannon observed that the movement of the Holy Priesthood of God and the Church were restored, “then all hell is moved.” He catalogued the forms of resistance that can be expected when “all hell is moved.”

President Cannon, who knew that the adversary regards this telestial turf as his own, said that Satan will vigorously resist all rezoning efforts because this is his world. President Cannon further observed that the Saints—meaning you and I—must not make the mistake of assuming the existence of any truce between the forces of Satan and God. To believe so, said President Cannon, is “a very great delusion, and a very common one.”

President Cannon then warned that the forms of resistance to righteousness will strike us “with wonder and astonishment.” This, he said, would occur because “the war” which was waged in heaven has been transferred to the earth,” and that this conflict, he said, “will [come to] occupy the thoughts and minds of all the inhabitants of the earth” (Journal of Discourses 11:227–29). Brothers and sisters, The Church of Jesus Christ of Latter-day Saints will be at the epicenter of all that.

President Brigham Young observed that it would be at the very time when the Church was reaching out to all the nations of the world, when it was prospering and growing, that there would be in proportion to the spread of the gospel a rise in the power of Satan. We are in that very period of time now, too. The obscurity of the Church has given way to visibility. You who have entered here to learn and who go forth to serve mankind—wafted as you will be from place to place on this planet—are also builders of the kingdom. You must be especially aware of the confluence of events that I am describing. You must still go forth, for you have been sent to this planet at precisely this time because you could cope with the challenges being described.

Elder Maxwell, who was a president in the Seventy when he gave this talk, said:

In the beginning of the Restoration, Joseph Smith quickly became an object of scorn and ridicule. The reaction to him, except by Satan’s scale, was all out of proportion. Joseph reflected upon this when he observed:

How very strange it was that an obscure boy . . . should be thought a character of sufficient importance to attract the attention of the great ones of the most popular sects of the day, and in a manner to create in them a spirit of the most bitter persecution and reviling.

But as the Prophet observed, “strange or not, so it was “ (Joseph Smith 2:23). As with that individual, so with God’s institution. When the Saints are spotlighted, it will not always be for us to take curtsies and bows; sometimes the spotlights will be searchlights.

Note, brothers and sisters, that it is the validity which draws the fire of the adversary. Combine validity and visibility, as in our time, and there is even more reaction. The adversary would scarcely pay any attention to a still numerically obscure Church unless he recognized what is underway for just what it is. Jesus declared who he was, and many disbelieved him, but the unclean spirit in Capernaum recognized him and said: “I know thee who thou art” (Mark 1:24). Lucifer and his legions are alert; they know Christ’s church is what it is. The adversary is aware.

There are those who chronically misunderstand the Church because they are busy trying to explain the Church from the outside. They are so busy believing what they want to believe about the Church that they will not take the time to learn what they need to learn about the Church. They prefer any explanation to the real explanation. Some prefer to believe the worst rather than to know the truth. Still others are afraid to part the smokescreen of allegations for fear of what they will see. Yet one cannot see the Louvre by remaining in its lobby. One cannot understand the Church by remaining outside. A non-believing but fair critic of the Church, a friend of mine, once said that the Book of Mormon was the only book some critics felt they did not need to read before reviewing it.

Some insist upon studying the Church only through the eyes of its defectors—like interviewing Judas to understand Jesus. Defectors always tell us more about themselves than about that from which they have departed.

Some others patiently feed their pet peeve about the Church without realizing that such a pet will not only bite the hands of him who feeds it, but it will swallow his whole soul. Of course we are a very imperfect people! Remember, however, that while it is possible to have an imperfect people possessed of perfect doctrines (indeed, such is necessary to change their imperfections), you will never, never see the reverse: a perfect people with imperfect doctrines. The more people there are who bear false witness concerning a true movement, the greater the need for us to be true witnesses of the Savior and his way of life. We can be noble even when we are being treated ignobly. We not only can be, but we must be.

For there are certain men crept in unawares, who were before of old ordained to this condemnation, ungodly men, turning the grace of our God into lasciviousness, and denying the only Lord God, and our Lord Jesus Christ. [Jude 4]

Clearly, the Book of Mormon was needed as an added witness in these, the decades of deep doubt. Clearly, the theophany at Palmyra puts to rout all the chatter about the historicity of Jesus; it ended all the theological fuzziness about the nature of the Godhead.

Christians who worship a resurrected Jesus Christ (a Jesus who not only lived but lives) and who believe in the sermon at Capernaum and the sermon on the Mount are kingdom-builders. When such individuals, clothed in the purple of the holy priesthood, preach Christ crucified and Christ resurrected, and when such people become increasingly effective in kingdom-building, indeed “all hell is moved.”

It would be so much safer to float with the ebbing theological tides as do so many today who simply regard Jesus as a Galilean Gandhi or as a Socrates who strode in Samaria. But we know Jesus to be divine, the literal Son of the Father. We know that he established his church, and that it is not simply a church built upon doctrinal debris from other dispensations or fragments of the faith from another age. It is a church built upon the fulness of his gospel; it bears his name and is his kingdom in these latter days, a kingdom to which the good men and women of all nations, cultures, and races will be drawn. Knowing this, we are like Joseph Smith—we speak the truth because we can do no other.

As the veil of unbelief thickens around the globe, nothing can rend “the dark veil of unbelief” (Alma 19:6) that is not sharp, piercing, bright, and true. Dull disciples will not light the way nor draw people to the kingdom. The philosophies of the world cannot do it, for so far as having some saving and consequential core to them, such philosophies are like peeling an onion. Perhaps that is why we cry when we peel onions. The truths we seek to live and to share are sweet, reassuring, and redeeming. But they are also tough truths; they keep us up against things that really matter. And central to all of these truths is the declaration of the Savior himself in which he said, “Behold, . . . I am the light, and the life, and the truth of the world” (Ether 4:12). These are not the words of some Buddha born in Bethlehem; these are the words of the resurrected Lord Jesus Christ.

We say (without tying it to any sense of personal vindication) what Paul said: that the time will come “at the name of Jesus every knee should bow . . . and that every tongue should confess that Jesus Christ is Lord, to the glory of God the Father” (Philippians 2:10–11).

True, all hell may be moved, but as it moves, the devil’s kingdom will be irrevocably shaken, so that many can be shaken loose from his grasp. It is the kingdom of heaven that is coming—triumphant, true, and everlasting! God grant that we may each be faithful to all the assignments given to us during our premortal preparation for these dramatic days, I pray in the name of Jesus Christ. Amen.

9 thoughts on “Revisiting a prophetic talk”