This is a guest post from Pat Chiu, a life-long Mormon and mother of ten children. Pat has spent several decades engaging the “controversies” regarding Mormonism from an intellectually rigorous and faithful manner. She has post-graduate training in anthropology and is a member of the board of Utah Valley Artist Guild. Her hobbies include carpentry and writing. 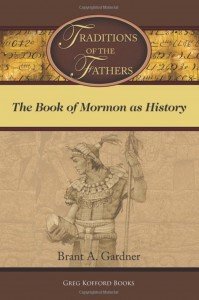 Brant A. Gardner, Traditions of the Fathers: The Book of Mormon as History, published by Greg Kofford Books on 6 August 2015.

Gardner writes, ‘Of the myriad possible ways to read the Book of Mormon I choose to read and tell it both in history and as history.’ He finds this enhances its value as a sacred work of scripture.

Dr. Gardner provides copious endnotes and an inclusive bibliography providing information both from his critics and those who have helped him reach his conclusions.

Along with scholars and general authorities such as Neal A. Maxwell, Gardner feels that naïve enthusiasts who espouse and promulgate various theories about its origin and settings (my words), including spurious parallels, have done more damage to accepting the authenticity of The Book of Mormon than have sceptical scholars such as Michael Coe.

Among the factors Gardner examines are climate, geography, linguistics, ancient myths and geophysics including volcanic eruptions, all of which contribute to Gardner’s finding that the Book of Mormon is a historical work. He incorporated much that is available in his six volume work Second Witness: Analytical and Contextual Commentary on the Book of Mormon. In The Book of Mormon as History, Dr. Gardner adds additional material and ‘compacts the history so that a reader can get a feel for the real setting behind the Book of Mormon in a chronological framework.’

In the opinion of the person introducing Brant Gardner to those attending the 2015 fair Mormon conference in Provo, Utah, ‘He is one of the best minds working on issues concerning The Book of Mormon today’.

Prior to his LDS mission to Madrid, Spain ’71 to ’73, Gardner’s interest in the possible archaeological background of the Book of Mormon was ignited by reading Thomas Stewart Ferguson’s One Fold One Shepherd, although he later realized some of its assumptions were erroneous.

On return from his mission Gardner decided to read the legends of Quetzalcoatl so that he could say that he knew it because he read it. A conversation with John L. Sorenson about a possible Mesoamerican setting for the events of the Book of Mormon that occurred more than a decade before the publication of Sorenson’s An American Setting for the Book of Mormon in 1985, confirmed Gardner’s interest.

Although he has supported himself by working in the software industry he pursued his avid interest in pre-Columbian Mesomerica. In 1978 he received a Masters in anthropology from State University of New York New York (SUNY), Albany with with an emphasis in Mesoamerican ethnohistory. He completed coursework toward a PhD at the same institution. His publications in the field include studies of the ‘Christianization’ of Quetzalcoatl, Mesoamerican linguistics and other topics related to his field of study.

My first experience of Brant Gardner’s work was his book The Gift and Power: Translating the Book of Mormon (2011) which begins with a study of Joseph Smith’s cultural background, a work that will prove valuable to anyone whose interest was stimulated by recent publication of photos of the seer stone and the printer’s manuscript of The Book of Mormon.

According to most Book of Mormon scholars including Gardner, the events recounted at the beginning of 1 Nephi take place in the historical setting that can be verified by reading the Bible and other sources related to the old world. The existence of Nahom, a real place in the Arabian Peninsula and various sites that correspond to Nephi’s description of Bountiful along the coast of Oman are relatively recent discoveries that support pre-migration events recorded in the book of Mormon.

The first problem with linking the document of the Book of Mormon into a real history once Lehi and his family reached the new world is establishing a probable setting. A number of sites have been proposed for Nephite lands. Gardner does not argue about any of the many alternatives that are promoted by eager proponents. In a humorous aside during his 2015 Fair Mormon presentation, he postulated the existence of someone who comes up with a new proposal regularly. Gardner dedicates his book to John L. Sorenson with good reason. Although he avoids uncritically accepting all of Sorenson’s conclusions, his multilevel approach to confirming the historicity of the Book of Mormon is founded in the idea that Mesoamerica is the likely candidate for Nephite lands.

From the time Joseph Smith received his first visit from the Angel Moroni paradigms of both critics and supporters of the idea that the book of Mormon represents real people in a historical setting have shifted. The thought that inhabitants of the New World were descendents of the 10 tribes of Israel that were separated before the Babylonian captivity was present in the culture in which Joseph Smith lived. Early converts to the church tended to think of the North American Indians as directly related to the people described in the Book of Mormon, bolstered by the existence of earthworks and mounds that hinted of an ancient civilization in Ohio and other nearby states.

As information about the hidden civilizations that had existed in the jungles of Mexico and Guatemala began to come to light not long after the publication of the Book of Mormon, attention shifted to that area as a possible setting. Some clung to the idea that no one lived on this continent except the one remaining Jaredite, Coriantumr, when the Lehites arrived in the promised land.

Another common but likely erroneous idea is that the hill in New York State, known as Cumorah, where Joseph Smith received the golden plates, is the same hill in which Mormon buried a large collection of plates from which he edited the plates he gave to his son Moroni and which he identified as Ramah, the site of the last Jaredite battle.

Gardner addresses the idea that Quetzalcoatl is a representation of Christ in a lengthy chapter that utterly dismisses that possibility. The feathered serpent, a Mayan icon in which many find a type of Christ, more likely represents the people Mormon identifies as Gadianton robbers. Just as most Mormons live in America and could be identified as primarily Americans, the people of Nephi lived within the framework of the Mayan culture.

A likely site for Zarahemla is covered by a modern reservoir and other sites are buried in the volcanic activity described in third Nephi, however Gardner’s scholarship does not focus on the discovery of stones and bones.

You Can Watch the YouTube Videos (but the book is better)

Videos of several of Brant Gardner’s previous presentations to Fair conferences are available on YouTube. His presentation at the 2015 Fair Conference was related to this latest work, The Book of Mormon as History, and is available for viewing for those who have purchased online access to the streamed Fair Mormon conference content. I was able to view his remarks through a video made at the conference not long before I completed reading all but the bibliographical material at the end of the book. Although Gardner is an engaging and informative speaker, to paraphrase the LDS PA department’s ad: “You’ve seen the movie, the book is better.”

Though I wanted to provide a timely review, I knew from experience with reading Gardner’s The Gift and Power that his chapter end notes contain additional material including quotes and comments that I wouldn’t want to skip.

Interested in more? A good companion to this work is Grant Hardy’s Understanding the Book of Mormon which focuses less on the ethnohistory, geography and geopolitics of the book and more on those responsible for its content including Nephi, Mormon, Moroni and Joseph Smith Jr.

7 thoughts on “Review: The Book of Mormon as History”