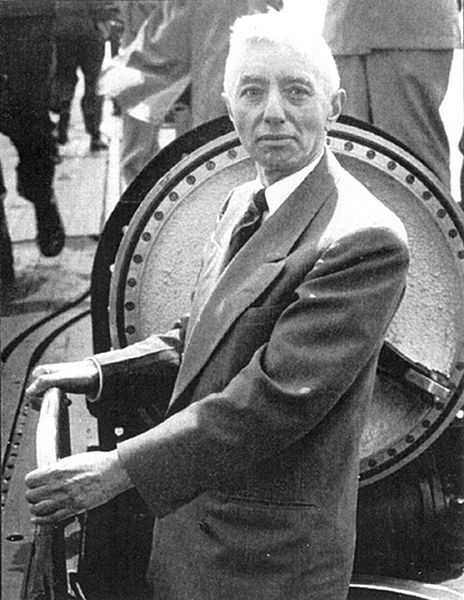 Hyman Rickover was a great man and a controversial man. He was convinced nuclear power was fundamentally dangerous, and yet he created the US nuclear Navy. His interviews of prospective officers for the nuclear Navy were bizarre. At times he demanded a candidate call their fiancée and break off the relationship. One time he told the officer candidate to shut himself up in the closet and remain there until Rickover let him out, which did not occur until the next day.

When the young officer asked why Rickover had forced him to stay in a closet without relief for an entire day, Rickover responded that the time could come when the officer would have to stay at the reactor in an emergency, a time when it would not be possible to leave the station without disastrous results.

A colleague has the following Rickover quote as the wallpaper for their computer screens:

“Responsibility is a unique concept… You may share it with others, but your portion is not diminished. You may delegate it, but it is still with you… If responsibility is rightfully yours, no evasion, or ignorance or passing the blame can shift the burden to someone else. Unless you can point your finger at the man who is responsible when something goes wrong, then you have never had anyone really responsible.”

There are many contexts where this view of responsibility is compelling. In my view, however, parenthood is the most critical of these contexts.

The mother and father of each individual born into this life have this responsibility. When they fail, others may surge forward to take up the burden of caring for the child. While this is admirable, we should never create so strong an adoption market that children are wrested from their biological parents by design.

In a similar fashion, scientific investigation of the outcomes for children consistently show that the gold standard is for a child to be raised by their biological parents (necessarily male and female) in a committed marriage. Anything short of this gold standard results in significantly increased probability that the child will be damaged.

A man or woman who, through selfishness or fecklessness, denies their child this gold standard will rightly be held to account for the damage they have done. If you don’t know how damaging “alternate lifestyles” are for children, check out the research of Dr. Brad Wilcox of the National Marriage Project. An example is his NY Times piece, “Why the Ring Matters“. For what it is worth, Dr. Wilcox is not a member of the Church of Jesus Christ.

Rickover on the Academic Critic

Admiral Rickover operated in an environment where politicians would tell him what to do based on information they had obtained from the “best” academics. In looking for the responsibility quote, I tumbled across Admiral Rickover’s assessment of these academics and their proposed reactor designs. I couldn’t help but think of arm-chair critics of the Church of Jesus Christ.

“An academic reactor or reactor plant almost always has the following basic characteristics: (1) It is simple. (2) It is small. (3) It is cheap. (4) It is light. (5) It can be built very quickly. (6) It is very flexible in purpose. (7) Very little development will be required. It will use off-the-shelf components. (8) The reactor is in the study phase. It is not being built now…

“[A] practical reactor can be distinguished by the following characteristics: (1) It is being built now. (2) It is behind schedule. (3) It requires an immense amount of development on apparently trivial items. (4) It is very expensive. (5) It takes a long time to build because of its engineering development problems. (6) It is large. (7) It is heavy. (8) It is complicated…

The academic-reactor designer is a dilettante. He has not had to assume any real responsibility in connection with his projects. He is free to luxuriate in elegant ideas, the practical shortcomings of which can be relegated to the category of “mere technical details.” The practical-reactor designer must live with these same technical details. Although recalcitrant and awkward, they must be solved and cannot be put off until tomorrow. Their solution requires manpower, time and money.

“[Academics] are innocently unaware of the real but hidden difficulties of their plans, they speak with great facility and confidence. Those involved with practical reactors, humbled by their experiences, speak less and worry more.”

We who are engaged in the practical work of nurturing souls are not at liberty to “luxuriate in elegant ideas” that ignore the practical details of real people.

On the other hand, those who attempt to justify their failures as “tradition” must not forget that “no evasion, or ignorance or passing the blame can shift the burden to someone else” [if the responsibility is rightfully yours].

One final thought from Admiral Rickover. He said, “I believe it is the duty of each of us to act as if the fate of the world depended on him. Admittedly, one man by himself cannot do the job. However, one man can make a difference.”

Permission granted to all readers to act as they see fit, to take responsibility, get real, and save the world.