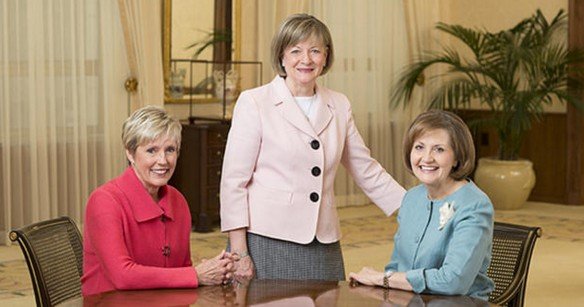 It was during the presidency of Spencer W. Kimball when the leadership of the Church formally aligned themselves with the three-fold mission of the Church:

Proclaim the Gospel
Strengthen the Members
Redeem the Dead

The three presidents of the Church’s organizations headed by women have been invited to be permanent members of the the Executive Councils aligned with this three-fold mission.

The women who have served in these positions have often been ad hoc participants in these councils in the past, but the formalization of their membership in these councils and broadening the focus beyond “priesthood” is highly significant. This move does not merely add three women to the highest Church councils, but serves as an initial step towards integrating tens of thousands of women into Church leadership throughout congregations in all the world.

With the announcement that the highest “PEC” in the LDS Church is becoming the “PFEC,” with permanent inclusion of women, we can expect an updated version of the Handbook of Instructions that rolls out and dictates the PFEC structure for stakes, wards, districts, and branches. Women in the congregations (who are already in positions of leadership) will become part of the PFEC.

[Feel free to point out where I might have erred in my understanding of what’s going on here.]