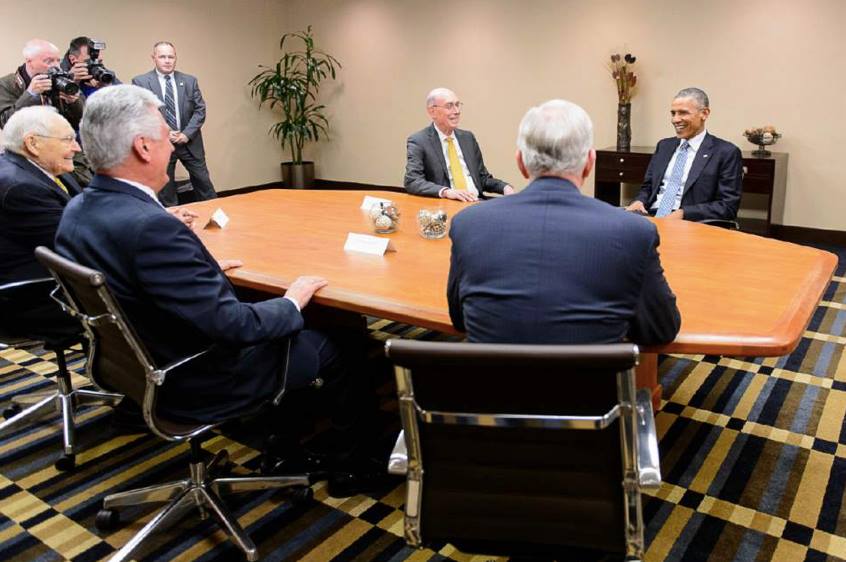 President Obama made his first trip ever as president to Utah on Thursday. He met with Church leaders and local politicians, but not with President Monson, who is preserving his strength for General Conference

From the Deseret News:

Traffic was cleared before Obama’s motorcade made its way from Hill onto I-15, diverting onto Legacy Parkway and winding back to downtown Salt Lake City just before 9:15 p.m.

Obama met with LDS Church leaders at the hotel, including President Henry B. Eyring and President Dieter F. Uchtdorf of First Presidency, and Elder L. Tom Perry and Elder D. Todd Christofferson of the Quorum of the Twelve Apostles.

Deputy White House press secretary Eric Schultz said they were expected to talk about the church’s long record of service, including its work on disaster relief and other humanitarian issues, and the need to fix the nation’s broken immigration system.

The leaders were also to discuss the need to forge more common ground across differences and to promote service to neighbors, both in the United States and around the world.

“Because of the need to preserve his strength for this weekend’s general conference, it was felt that the logistics of meeting away from church offices, with the walking and the waiting periods associated with a presidential visit, would regrettably not be conducive to President Monson’s participation,” said church spokesman Eric Hawkins.

Hawkins said President Monson remembers fondly his visit to the White House to present Obama with his personal family history in 2009.

President Obama has visited many “red states” in the last few months, and this was his first time in Utah as president.

To see the history of presidential visits to Utah, see this.

16 thoughts on “Pres Obama meets with Church leaders in Utah, Pres Monson skips meeting to preserve his strength for Conference”