Every once in a while a poll comes along that surprises you, and the Pew polls have done that once again. It turns out that a growing number of Americans are not happy with a trend they see against religion in politics.

Nearly three-quarters of the public (72%) now thinks religion is losing influence in American life, up 5 percentage points from 2010 to the highest level in Pew Research polling over the past decade. And most people who say religion’s influence is waning see this as a bad thing.

Perhaps as a consequence, a growing share of the American public wants religion to play a role in U.S. politics. The share of Americans who say churches and other houses of worship should express their views on social and political issues is up 6 points since the 2010 midterm elections (from 43% to 49%). The share who say there has been “too little” expression of religious faith and prayer from political leaders is up modestly over the same period (from 37% to 41%). And a growing minority of Americans (32%) think churches should endorse candidates for political office, though most continue to oppose such direct involvement by churches in electoral politics. 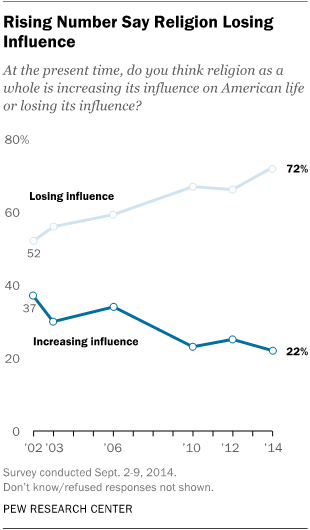 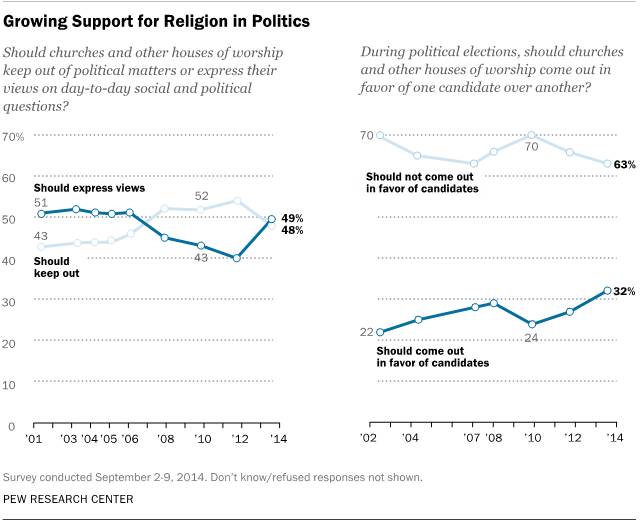 From a Mormon perspective, there is good and bad news in such polls. As a minority religion, Mormons are not necessarily going to be well-treated by “more religion in politics.” On the other hand, Mormons generally seem to favor the Judeo-Christian values of the other dominant religions in the United States, so most Mormons probably look favorably on such trends.

I would encourage readers to peruse the entire poll, which can be found here.

One trend I found interesting is the increasing separation between the religious and non-religious. As Pew states it:

The findings reflect a widening divide between religiously affiliated Americans and the rising share of the population that is not affiliated with any religion (sometimes called the “nones”). The public’s appetite for religious influence in politics is increasing in part because those who continue to identify with a religion (e.g., Protestants, Catholics and others) have become significantly more supportive of churches and other houses of worship speaking out about political issues and political leaders talking more often about religion. The “nones” are much more likely to oppose the intermingling of religion and politics.

So on the one hand we have an increasing number of people rejecting religion. And on the other we have religious people becoming more vocal about sustaining religious discussions in the public square. I find that very interesting.

Please read the poll and share your thoughts below.

5 thoughts on “Poll: growing appetite for religion in politics”