In December 1989, under the first Pres. Bush, the United States invaded Panama and deposed the thuggish leader, Manuel Noriega. I was a reporter for the Miami Herald at the time and flew to Costa Rica to cover the invasion (flights to Panama were shut down during the invasion).

I crossed the border into Panama right before Christmas on a bus filled with other journalists. As we drove into the northwest Panamanian city of David, people surrounded our bus and cheered. They apparently thought we were part of the invasion force, and the people hated Noriega, and they were ecstatic to see the U.S. get rid of him. We watched as U.S. planes and helicopters landed in David and peacefully took control of the western part of the country. I went with a U.S. general to inspect a barn where Noriega allies had stored thousands of AK-47s. 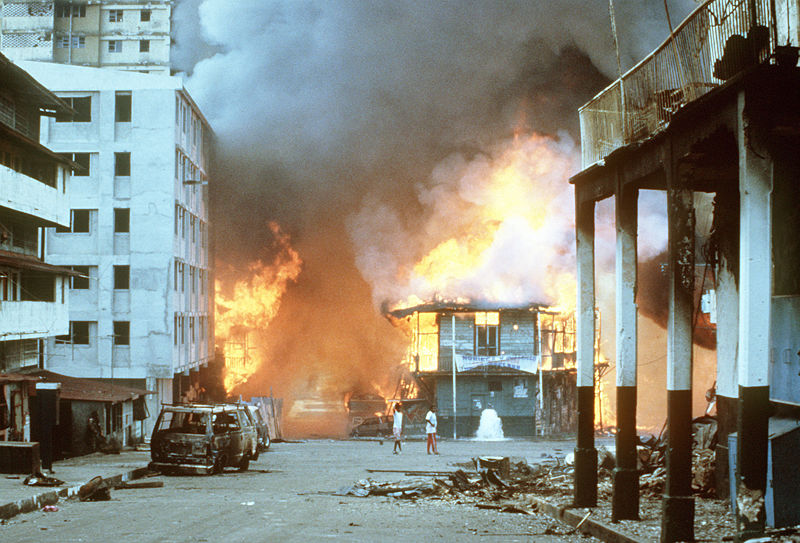 I then took a taxi to Panama City, stopping along the way at one of Noriega’s homes, which had been attacked by U.S. special forces looking for Noriega. It was a massive mansion, left empty as Noriega fled. I roamed around the house, looking at pictures of Noriega skiing in the Alps with his family, riding horses and boating, an intimate portrait of a wealthy dictator in his personal moments.

Noriega found his way to the Vatican Embassy, where he holed up for several days. Eventually, he surrendered to the U.S. military. He has spent all of his time since then in jails, first in the U.S., then in France and finally back in Panama, where he is incarcerated today, a sad, sick aging tyrant.

I thought of Panama over the weekend as I considered the Russian invasion of Ukraine. U.S. Sect of State Kerry claimed that Russia was acting in a 19th century fashion, invading sovereign countries on trumped-up charges. The hypocrisy of Kerry, who voted for the invasion of Iraq before voting against it, claiming that Russia is acting in a unique way, is absolutely laughable. The United States is launching drone strikes unilaterally in several Middle Eastern countries and is currently occupying Afghanistan. The United States has unilaterally invaded many countries over the years, including the invasion I witnessed with my own eyes, Panama. And by the way, at least 1,000 civilians were killed during the Panamanian invasion, many of them in the fire shown in the picture on this post, which took place in the slums of Panama City and may have been the result of a U.S. bomb.

The fact of the matter is that great powers will often act in ways that violate human rights. Great powers have spheres of influence. Panama, which is where Sen. John McCain was born and where the U.S. had a large military presence for many decades, clearly is in the U.S. sphere of influence. Russia understands this.

What we must consider is that the Ukraine, and certainly the Crimea, which the Russians just invaded, is in the Russian sphere of influence. The Crimea has a mostly Russian-speaking population and is the site of Russian military bases. It is not reasonable to expect the Russians to allow an unfriendly government to be installed in their direct sphere of influence. The Russians are reacting in the Ukraine in a manner very similar to the way the U.S. reacted in Panama. And, by the way, the people in the Crimea have greeted the Russians with open arms, just as the Panamanians cheered the U.S. invasion in 1989.

Let’s be clear: Panama is better off today than it was in 1989. Noriega was a violent thug who probably deserved what he got. He was a drug dealer and arms dealer who ordered his cronies to beat up and shoot literally hundreds of people. I was one of those people. In 1987, I was shot by Noriega’s thugs as I walked around the streets of Panama City. I was covering an anti-government protest as a journalist, and a group of uniformed thugs drove up in a pickup truck and started shooting people in the streets. I got hit by several shotgun pellets but was not seriously injured. I still have some of those pellets in my body.

(For the record, please consider that Noriega worked for the U.S. CIA for decades, including the time that President George H.W. Bush was CIA director. Noriega made a salary of $200k as a paid informant in Panama. History is always more complex than we would like it to be).

In 1990, the United States installed a leader who had been elected and then beaten up by Noriega thugs in 1989. There have been several free elections since then. Panama is relatively prosperous compared to many other countries in Latin America, and the people are generally happy with their governments since 1990.

I don’t think this will happen in the Ukraine. The people there are in for many rough years ahead. I would urge people to pray for the Ukraine and hope for a peaceful outcome.

The biggest mistake we could make is to ignore history as we consider Ukraine today. There is a precedent for what the Russians are doing today, both in Russian history and in U.S. history. This does not make it morally right for one country to invade another, but it does make it understandable. Consider Panama and Iraq when thinking about the Russians and Ukraine.

20 thoughts on “Perspective on Ukraine”