“The Fountain,” made in 2006, is a movie with Hugh Jackman and Rachel Weicz. It is a very artsy, controversial movie that shuttles between three different time periods over 1000 years. My wife didn’t like it but I really enjoyed it, and it has some very interesting religious themes having to do with eternal life and the nature of death. 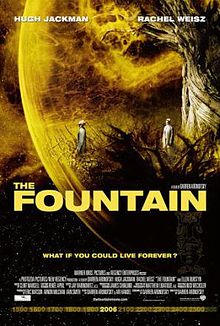 It will be impossible to describe this movie without some SPOILERS, so for readers who are bothered by this read no further.

I cannot describe the movie better than the Wikipedia description, so let me go straight to that.

At its core, The Fountain is the story of a 21st century doctor, Tommy Creo (Hugh Jackman), losing his wife Izzi (Rachel Weisz) to cancer in 2005. As she is dying, Izzi begs Tommy to share what time they have left together, but he is focused on his quest to find a cure for her.
While he’s working in the lab, she writes a story about 16th century Queen Isabella losing her territory to the Inquisition while her betrothed, conquistador Tomás Verde plunges through the Central America forest in Mayan territory, searching for the Tree of Life for his Queen.
Since she does not have time herself, Izzi asks Tommy to finish the story for her. As they look out to the stars, she imagines that their souls will meet there when the star dies. And we see astronaut Tom, in 2500, travelling there for the event, in a spaceship made of an enclosed biosphere containing the Tree of Life.
The three story lines are told nonlinearly, each separated by five centuries. The three periods are interwoven with match cuts and recurring visual motifs; Hugh Jackman and Rachel Weisz play the main characters for all three narratives.[1] Even within a given narrative, the elements of that particular story are not told in chronological order.
Whether these stories are actual events, or symbolic, is not clarified; and, Director Darren Aronofsky emphasized that the storylines in their time periods and their respective convergences were open to interpretation.[2]
The director has said of The Fountain’s intricacy and underlying message, “[The film is] very much like a Rubik’s Cube, where you can solve it in several different ways, but ultimately there’s only one solution at the end.”[2]
In a 2012 interview, Aronofsky stated that “ultimately the film is about coming to terms with your own death”.[3]

Some Mormon themes central to the movie are:

*The central role of the Tree of Life to our life on the planet (Genesis is quoted here).
*The Tree of Life produces things that give us eternal life.
*What happens when we die?
*We all want eternal life with our spouse (this is the central element of the story), and life seems meaningless without love that continues after death.
*The search for eternal life happens in all times of human history.
*The wife is dying of cancer but realizes that she will live on with others and will not be alone after death.
*The indigenous inhabitants of the New World seemed to have secrets regarding eternal life.
*The indigenous inhabitants of the New World discuss a creation story involving a “Father” figure who gives his life.
*The indigenous inhabitants of the New World are waiting the return of the “Father” figure.
*The main character can only advance as he evolves (becoming enlightened) over time.
*As he evolves, he and his wife live eternally in space (heaven).

To be clear, the word “Jesus” is not mentioned in this movie. There are also a lot of Asian religious themes, so people watching this movie to see a “Mormon movie” will only see the Mormon connections if they ponder it a bit.

This is one of those movies that is not universally liked. Some critics loved it and a lot hated it, and it was not commercially successful. But it has developed a bit of a cult following since it came out.

The acting is excellent, especially from the wonderful Hugh Jackman. I would recommend this movie highly to people who like to be challenged intellectually.

The Fountain is rated PG-13 and has one or two very brief scenes of nudity, a fairly sexy scene in a bathtub and a few violent scenes. Not for kids.