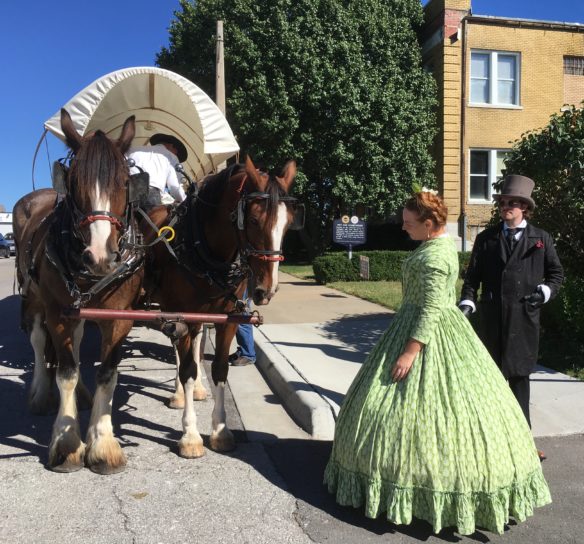 The John Whitney Historical Association met in Independence, Missouri, this weekend. This conference is an intimate gathering of those dedicated to study of the restoration faiths which arose from the teachings of Joseph Smith. Though I was only a second-time attendee, I still felt like I was returning to a gathering of friends and family.

Amidst this group, the struggles between factions of the “Mountain Saints” (~16M strong, who look to Salt Lake City for guidance) gain context as we embrace the similar struggles experienced by the “Prairie Saints” (~250K strong, who gathered to the banner of Joseph’s sons) and the “Sylvan Saints” (~20K strong, those who looked to Sidney Rigdon and then William Bickerton). We visited the Temple Lot and surrounding buildings of disparate denominations of Church of Jesus Christ (via covered wagon). It becomes clear that Joseph’s legacy spawned a diversity of religious expression peopled by good and earnest individuals.

I had the pleasure of presenting in a session with Brian Hales, who critiqued the various attempts to explain how Joseph Smith could have created the Book of Mormon. Brian’s presentation clarifies that the (vast and numerous) critics of the divine origin story of the Book of Mormon have failed to produce an explanation that doesn’t also require an overwhelming level of magical thinking.

I presented regarding the Women’s Statements of May 1842, discussing how and why these accounts of seduction were suppressed and then redacted when published.

It was a pleasure fielding questions with Brian Hales, who obviously is an expert in his own right with respect to Nauvoo plurality. But he was delighted when someone finally asked a question that didn’t focus on “polygamy.”