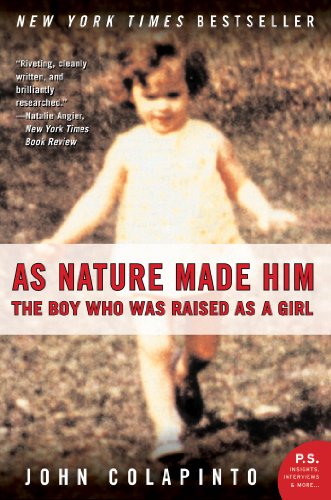 Shortly after I was born, a Canadian doctor accidentally burned the penis of an identical twin, setting in motion a series of events that has had tragic consequences for innumerable individuals.

As Nature Made Him is my book group’s selection for August, hence why I am telling you in 2018 about a book published in 2000. But the book is germane to events occurring now.

I strongly recommend this book, if you have not yet read it. The rest of the review contains spoilers.

Money believed that individuals are born without a fixed gender identity and that a genetic male could be successfully raised as a female without any negative repercussions, so long as the shift to female occurred before age two. Money’s Harvard doctoral dissertation showed no negative outcome for intersex individuals (individuals whose genetic gender is improperly expressed in their genital configuration). Yet soon thereafter, Money began advocating for infant surgery to transform babies with odd genitals into seeming girls (it being easier to cut things off than add things, in the 1950s).

Money was a pioneer in what many would consider the worst of the sexual revolution. He advocated pederasty (so long as the child involved “consented”), fascination with feces and urine in sexuality, and thought it was recommended and proper for young children to be exposed to naked adults and pictures/movies of sexual activity. In Money’s lexicon, sex was nothing more than a physical act to gratify the physical senses.

Bruce was castrated and transformed into “Brenda.” In the annual follow-ups with Money, Brenda and her twin, Brian, were shown explicit sexual material, grilled about what sexuality would manifest for them (this when they were not yet old enough to attend school), and forced to take sexual positions with one another. “Brenda” and Brian did not realize their parents were unaware of this “therapy.”

“Brenda” was never comfortable with being a girl, continually acting in ways consistent with birth gender. The terrible resistance to the “therapeutic” gender increased as high school coincided with pressure to complete the surgical transition to put in place a vagina. Money was held in such high world-wide regard that it took years before anyone was willing to consider that maybe, just maybe, the child was right.

When told he’d been born a boy, the former Bruce rejected his birth name (too nerdy) and gave his parents his choices: “Joe” or “David.” They chose David.

David wondered why a loving God would allow him to suffer so. David had no idea that his “successful” transition from intact male to little girl had formed the basis for an entire industry that surgically cut thousands of boys with damaged or small penises to turn them into little girls. As of 2000, that industry was still healthy and “preferred.”

In the vast majority of cases, the hormones to which a fetus is exposed as early as mere days after conception is controlled by the genetic markers (XX for females, XY for males). But Dr. Diamond was a relatively junior researcher at a university far less prestigious than The Johns Hopkins University, where Dr. Money had his practice.

Dr. Diamond followed Dr. Money’s pronouncements about the “highly successful” transformation of the un-named male twin who had been castrated and raised as a girl. But then the updates ceased. Dr. Money blamed the cessation of updates on invasion of privacy endured by the family due to journalists, an outrage for which Money blamed Diamond.

Both curious about the outcome of the case and wishing to clear his name of calumny, Dr. Diamond attempted to locate the twin. By this time David had been living as a man for years but infant “gender reassignment” surgery was taking place across the world as though the transformation of the twin had been fully successful.

An initial medical journal article was rejected multiple times over the years, only being published in 1997. In that same year John Colapinto (a writer for Rolling Stone) was the journalist selected to write up the story (David liked rock and roll). Colapinto asked David to eschew the anonymity that had cloaked the case heretofore and allow a book treatment that included real names and actual places. David agreed. Colapinto makes it clear that every scene and quote in the book comes from actual interviews and recorded transcripts.

David became moderately wealthy from the settlement for his botched infant surgery and his share of proceeds from the book. At the time the book was written, David was married and raising his wife’s three children from prior relationships. David’s twin, Brian, had been married and was father to children as well.

Where David had been the more obvious victim of the botched circumcision and subsequent gender manipulation, Brian had developed his own series of issues arising from the terrible stressors on the family, including criminal behavior, substance abuse, and violence. In 2002 Brian died of a lethal combination of alcohol and drugs.

The warehouse where David had worked had closed shortly before the book was published. David had attempted to parley his riches into investments, but misfortune and a con artist took the riches without leaving a residue, the more painful as David had refused to give Brian requested financial assistance prior to Brian’s death.

Without work to distract him and believing that his wife’s exercise and part time job meant she would leave, David committed suicide in 2004.

Some of you may be like me, unaware of the Money v. Diamond debate and how Dr. Money fundamentally created the current gender confusion with which we and so many loved ones are dealing.

The case of the twin named David made it clear the intense pain an individual could suffer, forced to grow up gendered in a manner antithetical to their essence. There are now unknown thousands of individuals who were improperly cut as infants and forced to grow up as girls. Some of these are seeking to “come out” as a different gender from what the world has known them by.

But in all this shifting and changing, there are also those who were raised in accordance with their genetic gender. It is not knowable if they suffered an atypical hornomal cocktail during gestation (a factor correlated with homosexual behavior in rodents). In 2018 the world is anxious to ensure that no one is “forced” into a gender with which they are not comfortable. This reflects a strange admixture of the old tenets advocated by Dr. Money and the compassion that rightly should prevail for those from whom a normal childhood was stolen.

Some wonder why the LDS Church’s 1995 Proclamation on the Family mentions that gender is an eternal attribute. As the facts of David’s failed gender reassignment were not yet public, the world was embroiled in Dr. Money’s certainty that gender was easily switchable years after birth. Even gender “reassignment” on the part of adults was relatively recent – the book mentions a highly publicized case in 1952. Prior to 1950, the idea that there even was a question regarding gender would have seemed ludicrous. The ability to switch gender was a factor that had not been present during any prior era when scripture was being written. There had never previously been a need to assert that gender ought not be switched at birth or soon thereafter.

My mother used to tell me she suspected I had been subjected to too much pre-natal testosterone. I had no idea what that meant, happy to be a girl and excel at math. It always seems fatuous to claim I am better at math than at writing, since any such declaration must be conveyed in writing. But it’s true.

I remember a time when my husband’s friends came to visit, with their several boys. As the kids headed to my daughter’s room, the parents tutted that their very boyish boys probably wouldn’t find anything to play with. A moment later they erupted from the bedroom, hands full of guns and trucks and other male-typical toys that my daughter had gathered to herself (she also had dolls and tea sets).

It occurs to me that there are three factors:

I am so glad that my children have never felt trapped as “female,” as has occurred for various of their friends and relatives. We watch with compassion as our friends grapple with those “coming out,” typically children thrilled to wear boy clothes and so forth.

At the end of the day, each individual, no matter what they wear or how they act, is either possessed of a Y chromosome or not. Therefore they are either genetically male or they are genetically female. They can wear gendered clothing and take hormones and engage in sexual activity and get surgical attachments all they want. But at the end of the day, their chromosomes are set, and were set at conception.