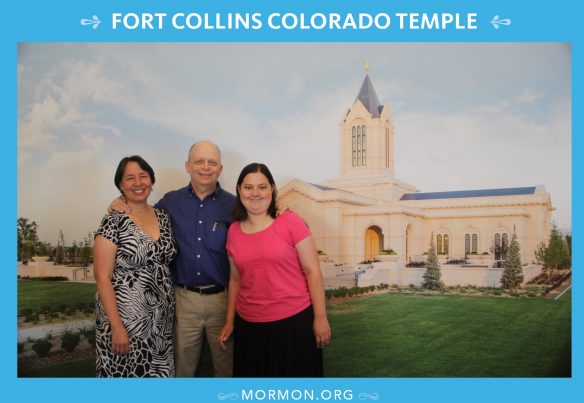 I was delighted to learn that the Fort Collins temple was holding an open house while we would be traveling through Colorado. Thank you M*!

It’s been a while since I’d gone through a temple open house. I think the most recent experience for me was the open house for the Nauvoo temple over a decade ago. Things are mostly the same, but slightly different. And I had delightful experiences talking with those not of our faith during my visit to Fort Collins.

Now it is possible to reserve your tickets online. However I didn’t notice much attention being paid to the exact ticket times, though I suppose that would have been different if there were overcrowding. We started in the regular Church building across from the temple, where those touring together were assisted to gather together first. Inevitably someone in the group was still lagging from parking the car, or individuals had taken the chance to visit the rest rooms. So the ushers kindly made sure groups were all together before pointing them to one of the rooms where the tour experience began. When I’d been at Nauvoo, there had simply been long, winding lines snaking about the property prior to entering the temple, so I appreciated this more personal approach.

Once we were seated in the room with our tour group, missionaries talked briefly about the temple and then started a 10-minute video talking about temples. The video was narrated by a young woman, and there were video segments from a range of individuals talking about the temple. I particularly appreciated Elder Holland’s remarks, as well as the segment of a couple which started out “before our son died…”

The missionaries then left and we followed our tour host across the street to the temple proper. I noticed a couple of polite individuals attempting to share literature as we crossed the road. But the ushers were similarly polite and ubiquitous, so no one was forced to interact with the young men hoping to save people from Mormonism.

Just outside the temple two rows of helpers assisted in covering our feet with little plastic protectors, white baggies with elastic on top. I noticed one individual had a cane, and they twisted the baggie so it would securely protect the cover of the cane. This was nicer than in the DC temple in the 1970s, where the carpet was temporary due to the knowledge of the heavy foot traffic. I loved being able to see the carpets as they would actually be, rather than cheap stuff intended to be replaced.

Our group included a woman in a wheelchair with her mother, who had come from Alabama to tour the temple because of a Mormon friend. They were Baptist, and so I stayed with them to explain various things. I pointed out the symbolism of the twelve oxen supporting the baptismal font, and we discussed how baptisms for living individuals are performed either in fonts in Church buildings or in any body of water deep enough to allow for the symbolism of immersion.

The paintings throughout the temple were wonderful. I particularly enjoyed how the paintings in the dressing rooms were appropriate to each separate audience, with pictures of the 12-year-old Jesus and doubting Thomas in the men’s changing room while the women’s changing room had images of the infant Christ being brought to the temple by Mary and Jesus ministering to the woman taken in adultery. I pointed out the counters with holes, explaining that we change into white in the temple and that these counters were for the laundry for those who had not brought their own white clothes.

In similar fashion, I noted the room where there were slanted shelves to store the shoes of those who were merely coming to witness a wedding, as they take off their shoes and don white footies.

The lovely Baptist ladies loved the bride’s room, talking about how wonderful it would be to prepare for getting married in such a space.

In the instruction room where the endowment begins, I explained the wonderful paintings of nature that covered the walls, discussing how we learn of the creation, Adam and Eve, and Christ’s salvation. In Fort Collins they have the two rooms, which allows them to conduct two sessions in the time it takes to do the endowment.

The Celestial Room, where we gather after going through the endowment instruction, was amazing. I mentioned that it is usually much more quiet than even the reverent noise of those touring. Again, they were struck by the beauty of the space, and how much of a privilege it is to be able to escape normal life to contemplate Christ’s atonement in such a lovely and peaceful place. (I pointed out the carved carpets, which I think are particularly lovely.)

The final rooms we saw were the sealing rooms, and I pointed out the mirrors reflecting our images back and forth in each direction. We talked about our lives after death, but also about how Mormons believe that we lived for an eternity with God before birth. Thus we each chose to come to this life.

As we left, the Waites family were sad that they didn’t have money to pay me for being their tour guide. As I had not had any thought that they would even imagine I might expect or accept money, I said, “Heavens no! It was my pleasure!” And in fact, I enjoyed the tour much more because of the chance to explicitly explain the paintings and symbols and mundane aspects of the temple.

Once outside the temple, I rejoined my family and we took a turn around the tent set up to further explain the different spaces and the materials that were used in building the temple. There was a picture-taking booth, letting each group who wished obtain a photo memento of their visit. That would be particularly nice for those who visited in inclement weather. When I got the e-mail with the photo link, it included buttons should I wish to make comments or simply learn more about Mormonism. This photo booth aspect of the tour appears to be recent, and I know it was part of the tour for the Provo City Center temple from pictures that were shared with me.

The three sister missionaries who had talked with us at the beginning of our tour experience were there in the tent to field any questions we might have. I thought that was a nice touch, to help people feel that they were asking questions of someone with whom they already had some level of rapport.

Fun with the Earnest Detractors

I could have returned to my car without talking with the two young men passing out their literature. But I decided to talk with them, as they seemed nice and I am confident in my faith. It’s always interesting to see what people think might disturb the faith of someone attending a temple open house.

The first question they asked was, “Do you know about polygamy?” For those of you who know me, you can imagine the grin that wreathed my face and my enthusiastic reply.

Next they said, “Have you heard of Todd Compton?” I broke out into an open smile and explained that Todd is one of my Facebook buddies, though we don’t agree on everything.

When they asked about how I explained the Church’s practice of polygamy in its early history, I responded first by discussing the situation faced by families where there has been more than one woman married to a man due to the death of a wife. Which of the wives, in a monogamous model, would be forced to face eternity without her family? Next I pointing to my arm, and stating the obvious fact that unblemished skin is the ideal. But then I talked about what happens when there has been terrible damage and the scar tissue that develops. I explained that the way polygamy was practiced in the early Church was in response to a terrible heresy. We talked John C. Bennett and the seductions and Catherine Fuller and the sniper who killed the Smith brothers.

They tried to tell me Eliza Snow had left the Church, and I pointed out that they meant Eliza Webb.

They tried to shock me by stating that Joseph Smith married women who already had husbands, and I replied by discussing my own ancestor, the Smith governess, who was only technically married when she covenanted with Joseph.

They tried to explain that Emma hated polygamy, and I was able to share Whitehead’s account of witnessing Emma participating in several of the covenant ceremonies where she placed these women’s hands in Joseph’s hand for the covenant. I suggested to them that those times that have been interpreted as Emma’s anger at polygamy were actually instances where Emma was angry and terrified that Joseph’s life was in danger because of the loose talk of those who didn’t know how to be discreet.

At some point the young men asked if they didn’t have just as much right to attempt to share their message as Mormon missionaries have. I replied that they were just doing what they believed was right. I didn’t say so, but I did hope they were abiding by whatever legal boundaries are normally put in place to protect people from unwanted solicitation. I certainly hope Mormon missionaries abide by the law as well.

When my husband drove up and reminded me we had to get on our way, I had one of the fellows type in their e-mail address on an e-mail forwarding a PDF of my book. I suggested that when they considered what I had researched, they would find that it wasn’t as problematic as they seemed to think. I realize this might mean that my writing merely gets incorporated into future editions of detractors’ literature, but as that has already been happening anyway, I wasn’t about to shy away from a chance to let an individual know a more full and understandable history.

Mainly, I was amused to see that the issues I have addressed with my book, Reluctant Polygamist, are the issues that detractors are most likely to use to disturb the faith of believers. And the detractors I talked with (aside from being children of God and therefore worthy of my attempts to persuade them to embrace a fuller truth) were so polite.

Of course, this last portion of my experience, interacting with detractors, need not be a part of your temple open house experience. But it was an enjoyable for me.