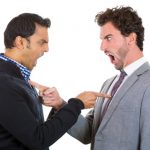 Years later the followers of Jesus Christ often didn’t fare any better. They didn’t rise up with an army or rebel against local authority, but they were treated as criminals at times. Not one of his Apostles, if the recorded history is correct, survived to die of natural or accidental causes. A whole generation, again if the history is to be believed as more than overblown propaganda, became known as martyrs. None are recorded to have fought back against their deaths at the hand of the government or hateful people. Obviously it wasn’t a full religious extermination or no one of such a small group would have survived. Christianity, no matter what condition it is today, would have died with the other now extinct religions. If they had fought back maybe things could have been worse.

To make the subject of civility and self-defense less straight forward, The Book of Mormon has even more of a mixed message. It can be argued it is a book that contains nothing more than about war and its costs, remedies, and at times necessities. The Anti-Lehi-Nephites or people of Ammon are looked at as the ultimate pacifists who would rather die than fight. What is skipped by many is how they only survived because, without objection, they let the Nephites defend them with weapons of war. The next people of Ammon generation fought with both faith and ferocity, and became known as Strippling Warriors. Both those who were peaceful martyrs and those who fought and died in battle for righteous purposes were praised, and neither condemned by God according to the Scriptural record. The message seems to be, taking both groups together, those who are prone toward confrontation should put down their “weapons” and those who genuinely want to protect need to “have their backs.” How that would actually work in a more nuanced situation without actual war is hard to determine.

Probably the most frustrating part of today’s incivility is both sides believe they have been wronged. There are those who claim some kind of inferior victim mentality that needs corrected. They look at those they claim have historically been in power and demand reparations and judgments passed on them. Although some of the accused group agree with that position, many others feel they are just trying to live their lives. They get backed into a corner by the victim class and those who support them and then the inevitable happens. We don’t have disagreements of ideas, but competing world views. Compromise isn’t even on the table.

An example of this is with same-gender marriage where people lost their jobs because they gave money to those who wanted to protect traditional marriage. They weren’t even protesting in the streets, but simply disagreed that such partnering should be recognized by the state. In response there were angry calls to have them shamed and driven out of whatever place they worked. Time and again there were suggestions that the name “marriage” should mean only a man and a women, but the legal status be changed for others with a different designation. Same-gender supporters were having none of such a compromise and sought complete capitulation. Never mind that in the past many of the same supporters said the slippery slope of equivalence laws redefining the term was paranoia. Even those who at one time agreed with a compromise quickly changed their minds and fought hard for complete and total reversal of standards. Next after that was forced labor to accommodate these marriages no matter how in opposition, to the point of threatened and actual close of businesses. In the end those who so much as expressed any opinion in opposition of same-gender marriages were, as stated above, turned into hateful monsters.

No amount of “civility” can quell the fanatical who seek nothing less than a total transformation of both the United States and the world into their Utopian image. Every ounce of showing respect for them, giving in to a few demands, and recognition of some truths they have is taken as weakness to be exploited. Those who at all oppose the new groove are worthy of getting stuffed into the garbage bin of history. An outstretched hand is slapped down and accusations of murder and destruction for not becoming part of the “movement” or “resistance” are leveled. Many times a few who claim to be inside the hated community join in the condemnations and are shocked when their demands don’t lead to complete reversals (although they do succeed at times). They spew vindictive in the name of love and rights. And still the hand is stretched out . . .

Until some have gone too far. That is where the current social incivility is becoming a critical mass with the possibility of a chain reaction. When the President of the United State’s duly authorized cabinet members are hounded and refused the simple courtesy of service at an establishment, what kind of reaction was expected other than in-kind responses? There is a growing feeling among those who have been labeled Nazi’s, Racists, Deplorables, and worse that their very lives are at stake. Sadly, this means that the backlash extends to any business with similar names even when completely unrelated.

The resistance either hopes that there won’t be very much of a counter-resistance (as they didn’t have much of one in the past) or that any push back simply reaffirms what they already believe about the opposition. A feedback loop is inevitable, and yet no response (despite those who call for civility without evidence such a thing has done any good) might mean extinction in the eyes of those who disagree with current changes. And yes, extinction of a particular world view is exactly what the resistance wants. 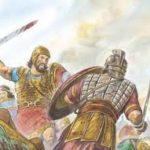 Prophecy has predicted this kind of splintering would happen until the culmination of the coming of Jesus Christ. The Book of Mormon reinforces this event with members of the Church of Jesus Christ of Latter-day Saints not immune to the outside divisions. The question is if such a prophecy is conditional or destiny. Current attitudes could progress until there is a Shiz and Coriantumr confrontation, although still somewhat in the future. Trying to take the peaceful route might be principled, but end in social (and worse case real) martyrdom. Fighting back might be a protection that destroys our souls. No matter what choice, actions or inaction have consequences. Current attitudes and behaviors have made it this way.

7 thoughts on “Martyrdom or Fighting Back”