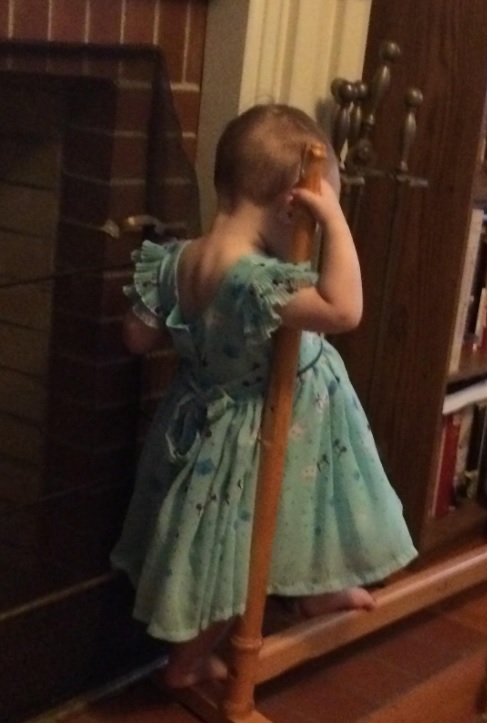 Recently I wanted to find out the probability that an average woman would get pregnant at any given age.

I was really surprised by what I found. In my family going back in time, people tended to get pregnant whenever it occurred to them to try. So I had this model in my head that likelihood of getting pregnant after puberty (menarche) was close to certainty in any given month when an attempt would be made, until the time when one’s body stopped wanting to deal with pregnancy.

But it turns out that the first several years of being a woman we females aren’t particularly fertile. It’s possible to get pregnant, as all too many teens can attest. But for most in that early period of time, there’s not reliable ovulation to accompany the outward signs associated with monthly ovulation. This anovulation seriously messes with likelihood of getting pregnant in the early teen years, which is awesome, since risk of maternal death is significantly elevated for folks who get pregnant before age 16.

The peak timeframe for fertility is in the early twenties. Across multiple studies, it appears a person who wishes to become pregnant at this stage of their life has a 97% chance of achieving their goal, with a 25% monthly probability of getting pregnant.

By age 25 things start to get slightly less probable, with monthly probability falling below 20%. But annual probability is still well above 90%.

As age increases, different factors come into play. The supply of eggs gets lower, and the likelihood an egg is slightly damaged goes up. This may account for the increased rate of miscarriage reported above age 30. And as age creeps up further, the probability of having a child with a disability caused by older maternal age goes from 1:500 to 1:60 – suggesting the vast majority of children will be just fine. Still, most studies indicate a person trying to get pregnant starting at age 40 has about a 50% likelihood of eventually conceiving. Pretty high, all things considered.

Use of IVF can bolster the likelihood of becoming pregnant significantly, though there are costs, both monetary and biological. I imagine folks seeking IVF in their early years are less fertile than average since the reason one would seek IVF at such an early age is because there’s some kind of problem. 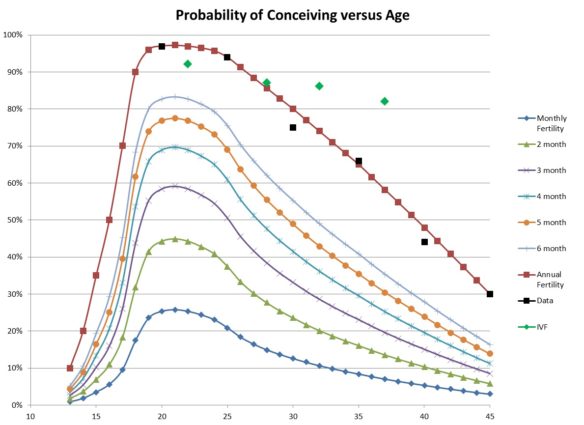 For me, looking at this graph, I’m super glad the Church lowered the missionary age for women to 19. Previously if one wished to serve a mission, you were necessarily taking out your most fecund years, particularly when you accounted for the time required to find a person with whom to be fecund. Besides, missions starting at age 21 cut up formal schooling in a particularly disruptive manner. Now one can mission, get home, get some schooling, graduate, and still not have squandered too much of one’s reproductive possibilities.

And yes, I value reproductive possibilities because kids are cute and grandkids (for which kids are a prerequisite) are possibly even cuter.

The math here assumes that every woman has only a 97% likelihood of becoming pregnant in her early twenties, where there are some who are nearly certain to become pregnant in any month they attempt to conceive (me and certain ancestors and relatives) while others just aren’t going to conceive without a near miracle. But actual experiences will vary from the probability model. And these numbers assume one actually is in a position to try for children.

So, did this graph surprise you? What insights does this information give you?

9 thoughts on “Making Babies… And Math”