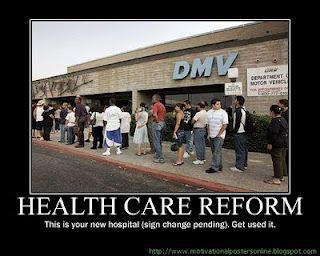 The Obamacare decision handed down by the Supreme Court has at least one side benefit: in upholding the mandate, the Supreme Court has re-energized the tea party movement. The majority of Americans strongly oppose the mandate (67 percent according to this poll), and the act of getting government even more involved with health care has caused millions of Americans to question how exactly it is constitutional. More people reading the Constitution is a very good thing. Tea party groups are already reporting a flood of energized people calling and e-mailing to fight Obamacare.

Make no mistake: the decision is a disaster for freedom-loving people. Congress has official permission to do anything to you as long as they call it a “tax.” So, we really are living in an Obamacare world, an Orwellian place where presidents promise they will not raise your taxes and then immediately do and where government bureaucrats are more firmly entrenched in your health care decisions (as if dealing with health insurance was not already painful enough). Big Brother is watching your prostate exam!

The most horrific thing about Obamacare is the lack of basic logic behind it. Follow along:

1)You must buy health insurance, but if you don’t want to you don’t have to, and you can pay a fine (this is the tax).
2)The tax is significantly lower than the cost of insurance, partly because insurance has to cover all kinds of things it didn’t have to cover before.
3)Companies have to provide coverage or they also will be taxed, but again the tax is much lower than the cost of insurance, so companies have an incentive to drop coverage.
4)If your company doesn’t cover you, or you are self-employed, what do you do? Well, you just pay the tax until you are sick, and then you buy coverage because of course insurance companies cannot reject you for any reason.

The end result, if Obamacare continues on its merry way to ruining our lives, will be:

1)Fewer companies offering health insurance as a benefit.
2)More people and companies paying taxes.
3)Fewer doctors willing to continue to deal with the health insurance bureaucracy rather than the reason they got into medicine in the first place, ie, healing sick people. The doctor shortage will worsen.
4)Health insurance moving farther and farther away from being actual insurance and premiums getting massively more expensive.

In short, you will be taxed more, will have fewer doctors to see, your health insurance costs will go up, and your company may very well drop coverage. Ain’t that great!

There is one silver lining in the Supreme Court decision. The Supremes said Obamacare could not be justified under the commerce clause, and this is a very good thing.

Today the court reaffirmed the traditional view that there must be a judicially-enforceable limit on the powers of Congress. From now on, Congress will need to take the limits of its own power seriously, because it can be assured that the court will be looking over its shoulder.

The election in November will now be about whether to replace Obamacare with market-based, consumer-driven health-care reforms that actually improve our health-care system, but it will also be about the Constitution. Voters can elect more “constitutional conservatives” to Congress who will take the message of today’s ruling to heart: their powers are limited by Article I of the Constitution. Voters must also insist that the next president fill vacancies on the Supreme Court with “constitutional conservative” justices who have the intestinal fortitude to withstand the intense political pressure that was brought to bear on Chief Justice Roberts after oral argument, beginning with statements by President Obama.

Whatever happens at the polls, however, by affirming that the Commerce Clause and the Necessary and Proper Clause of the Constitution have judicially enforceable limits, today’s decision will be a landmark of constitutional law.

Prof. Barnett’s long-term view provides some encouragement to liberty-lovers. There is a possible future where we will not all face DMV-like lines when we go to the doctor (see nightmare pic above).

Congress does have the power to do whatever it wants to you as long as it calls it a “tax.” BUT, Congress can no longer (in theory) use the commerce clause to justify these assaults on your freedom.

Which brings me to the question of what we must do next. As Prof. Barnett indicates, there is a possible solution, and that is to elect people who will respect the Constitution and decrease the size and power of government, not increase it.

This is the time when I must address arguments made by my liberty-loving friends, who basically say that we cannot elect most Republicans because they will, like Chief Justice Roberts, sell us out at the end of the day. My answer is: I agree with you. Most Republicans will sell us out. All Democrats will. So, we now face the following choices:

1)Don’t vote.
2)Vote for Obama and Democrats under the theory that making things worse faster will hasten the end and bring a quicker change.
3)Vote for the Libertarian party, which, let’s face it, has a much better platform and has clearly put forward a principled opposition to abominations like Obamacare.
4)Hold your nose and vote for Mitt Romney and (some) Republican candidates while we try to reform the Republican party in a pro-liberty direction.

Here are my answers to these choices.

If the Supreme Court decision proves anything, it is the power of the federal courts to determine our future. You could make a strong argument that the courts are now the most powerful branch of government (which was definitely not the Founders’ intent, but here we are). This situation makes it more clear than ever that we must choose candidates who will support liberty-loving justices — that is, unless you want to spend the rest of your life in a DMV-like line at the hospital.

Note to readers: all comments will be moderated. Your comment very likely may not appear, based entirely on my whim. If you don’t like it, go read another blog.

21 thoughts on “Living in an Obamacare world”