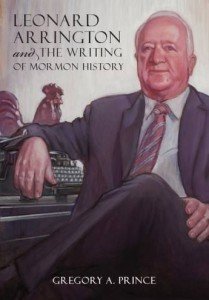 Greg Prince’s landmark biography of Leonard Arrington will be available at the end of May. Leonard Arrington and The Writing of Mormon History is the first biography to draw on Arrington’s 20,000 pages of journals. Of particular interest is Arrington’s time as Church Historian, from 1972 to 1980. Tonight I had the privilege of attending a presentation where Greg talked about his new book.

1972 ushered in a time of significant restructuring in LDS Church leadership. The Prophet and First Presidency had previously led the Church as a nearly flat organization, with little intentional coordination between individual fiefdoms. The apostles, for example, were merely charged to bear witness to the world, which largely consisted of presiding at Stake Conferences.

President Harold B. Lee wished to see more coordination (or correlation) between the different instructional aspects of Church hierarchy. At the same time, the Church had requested a study of the organization, asking how its management structure could be updated to reflect best practices. One of the notable recommendations was a true historians department, one that was not merely an adjunct responsibility of an ecclesiastical leader with no formal history training.

President Lee decided to heed the recommendation, and selected noted historian Leonard Arrington as the first “real” historian for the Church. The grand experiment would fail in less than 10 years.

Leonard Arrington, ironically, wasn’t formally trained as a historian. His original passion was economics, born of his Army service during World War II and prior college study. But his master thesis regarding Mormon economics was dry reading, until fellow scholar George Ellsworth suggested Leonard transform his thesis into a story about the people of Mormonism. Great Basin Kingdom: An Economic History of the Latter-day Saints, 1830-1900 was published in 1958 by Harvard University Press. A historian was born.

George Ellsworth came to despise Arrington, who was a prolific writer and less careful, historically, than Ellsworth. Arrington, on the other hand, reflects no sign of this, indicating that the animosity was one-sided.

Arrington had grown up in Idaho, but an Idaho where Mormons were a minority. Throughout the rest of his life, he was often on the outside looking in. When it came to history, this informed Arrington’s approach. Where other disciplines tended to be insular, Arrington invited all to participate in the telling of Mormon History. He completed the bridge between LDS and RLDS scholars. In 1965 Arrington helped establish the Mormon History Association, where the only qualification for participation was a passion for Mormon History.

When Arrington was elevated to the position of Church Historian, the open approach to history was exciting and thrilling to those who benefitted from Arrington’s kind and welcoming sponsorship. As long as Harold B. Lee remained the prophet, Arrington had top cover and could proceed as he wished.

But Lee died suddenly in December 1973. Arrington made the mistake of having ignored the Twelve Apostles. The new President, Spencer W. Kimball, was supportive, but not nearly as passionate about the historian initiative as Harold B. Lee had been. As President Kimball’s health declined, the leading apostles strove to regain control over the historian’s office. In 1982 Arrington inquired what his standing was. He was informed he was no longer the Church historian, and the release was retroactive to 1980.

The scholarship that had begun under Arrington’s benevolent stewardship continued to bear fruit. One of the most notable efforts was Mormon Enigma, a biography of Emma Hale Smith written by Dr. Val Avery and Linda King Newell. While the academic world lauded the book, the Mormon hierarchy balked. Avery and Newell were barred from discussing their book in Church venues.

The fruit continued into the 1990s, Now President Ezra Taft Benson led the Church. President Benson had been one of the apostles who had chafed at having a “civilian” Church Historian when Presidents Lee and Kimball were in charge. Despite concern that Ezra Taft Benson might implement as President the preferences he had clearly demonstrated as an Apostle, he did not significantly interfere with the historians. But like President Kimball, he too succumbed to ill health in the early 1990s.

Michael Quinn and Lavina Fielding Anderson represented some of the brightest stars who had achieved professional prominence under Arrington. In 1993 they were among the September Six, scholars who were excommunicated or disfellowshipped, apparently because of their writings.

[I remember the issue of Dialogue in which these scholars published prior to being excommunicated. My fiance had given it to me, asking me to read the articles. As I read the articles, I became quite concerned. If my fiance had given me this issue to persuade me, I decided I would have to break off my engagement. When I handed back the issue, I told him the articles had disturbed me deeply. My fiance said, “Me too.” I was so mad at him for letting me think he was a proponent!]

[I have close friends who had learned to disbelieve in God under the guidance of the New Mormon Historians. As additional scholars were disfellowshipped or excommunicated, these friends resigned their membership in the Church.]

As additional scholars were punished, Leonard Arrington came to believe that he, too, would be excommunicated for writing his biography. Leonard felt his personal papers would prove too sensitive, and asked that his papers be sealed for at least 25 years after his death.

In 1999 Leonard Arrington knew he was near death. His children pled with him to reduce the moratorium on his papers. Finally agreeing, he reduced the moratorium on his papers to only 10 years. Most of Leonard Arrington’s papers were bequeathed to Utah State University upon his death, though the Church obtained several materials directly from the family immediately after Leonard’s death and obtained control of certain other materials that were clearly produced under privileged relationship with the Church (e.g., history of temple worship)

When the moratorium was lifted, the Church attempted to gain control of the collection. Failing that, the Church requested that portions of the record relating to living leaders be redacted. These requests were refused.

Arrington was given full reign when the prior histories had been carefully crafted to be faith promoting. The change was too abrupt for many leaders. And much of the original historical information had never been shared with Joseph F. Smith, Church President and father of Joseph Fielding Smith, the pre-eminent Church Historian prior to Arrington.

Mormon History in the 1800s was carefully controlled. We see this in the way that Zina D. Huntington refused to let even her own children know of their father’s excommunication.

Arrington was the sweetest of men, but he was not a careful historian, nor did he have the political savvy to overcome the hostility the old guard Apostles would have felt for any Church historian they perceived as honoring “academic rigor” over the welfare of the Church.

New Mormon History and LDS Church leadership failed to maintain dialogue. Each felt the other was abusing their position. I could wish that the LDS Church leadership had been more familiar with the detailed history. I could wish that those engaged in New Mormon History had actually dug deep enough to find the honorable Joseph beneath the filthy lies told by Dr. John C. Bennett.

At the end of days, I expect we will find that both the New Mormon History and the Old Guard LDS leaders erred in not having adequately understood the history they each felt they were protecting.

In the mean time, I am sure that Greg Prince’s biography of Leonard Arrington will be fascinating to students of human nature.

25 thoughts on “Leonard Arrington: A View of Our Recent Past”