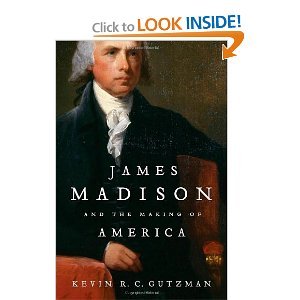 If we look at history from a Mormon perspective, it seems clear that Madison is the person who most helped create an environment that went beyond simple religious “tolerance” to true religious liberty. Madison was uniquely and acutely aware of the sufferings of minority religious groups, even in the colonies, and he fought incessantly against the establishment of a majority religion. I think we can make a strong argument that the religious environment for Joseph Smith would have been very different, and much less welcoming, if it weren’t for Madison.

From a relatively young age, Madison began to see religious freedom very differently than many of the Founders. Unlike many aristocratic young men from Virginia, he avoided the Church of England-influenced Virginia colleges and went to school in Princeton. There, he was exposed to the much more enlightened (and anti-establishment) Presbyterian views of the Rev. John Witherspoon.

For 21st century Americans, it is difficult to believe the conflicts that regularly took place in colonial America between Congregationalists, Anglicans, Presbyterians and Baptists, not to mention of course the much-hated Catholics. But suffice to say that a large percentage of the population spent a large amount of time despising you if you were not the “right” kind of Christian.

Madison found this situation intolerable. His early letters show a fascination with the subject. He wrote to fellow Princeton classmates inquiring about the status of religious tolerance in different colonies. He was absolutely appalled that six men in Virginia had been thrown in jail for promoting rather orthodox (but unpopular) religious views. Given this situation, it is much easier to understand how Joseph Smith was arrested multiple times for his religious “transgressions.” But, as I will show, I think it is safe to say Madison would have been a big proponent of the prophet’s right to evangelize as he wanted.

The position of many state-supported religions of the day was one of “toleration,” meaning that there would be one dominant religion and that others would be “tolerated.” In effect, they were not tolerated very much at all, and Catholics and Baptists in Virginia suffered under one form of persecution or another. But “toleration” was considered very enlightened compared to burning at the stake, confiscation of property and other measures carried out by the various state religions in Europe at the time.

Madison’s position is much more in line with what we would accept today, but remember this was completely ground-breaking at the time:

“Religion, or the duty which we owe to our CREATOR, and the manner of discharging it, can be directed only by reason and conviction, not by force or violence, and therefore, that all men are equally entitled to enjoy the free exercise of religion, according to the dictates of conscience.”

A close study of Madison’s views should make it clear that the First Amendment’s establishment clause is truly meant to create a United States free of state involvement in religion. Whether this means states should outlaw prayer in schools is perhaps a separate issue, but I do think we can ascertain that Madison would have opposed the view that the United States is a “Christian nation.”

There is another important point for Mormons: in an e-mail exchange with the author, Prof. Gutzman pointed out to me that Madison would have opposed the late 19th century attempts by the federal government to stamp out polygamy in Utah. Prof. Gutzman makes it clear that Madison would have been one of those rare individuals who truly understands the reality of freedom of conscience. It is comforting to know that Madison had such a crucial role in so many important early founding documents.