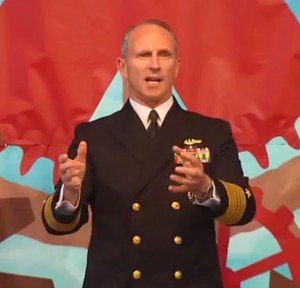 Today I came across a TEDx talk by ADM Greenert, who is Chief of Naval Operations.

I know something about the Navy, but as I listened to ADM Greenert’s remarks about integrity and accountability, I thought about the individuals who lead our congregations at the ward and stake level.

I thought about a Joseph Smith who took responsibility for the sins of his people, that we all might be saved with our families. And I thought about Eliza Snow and Brigham Young, two of those who had at one time had been deceived by those promulgating spiritual wifery (aka illicit intercourse). 1

I also thought of William Smith, forgiven and counseled innumerable times, who ultimately chose to boldly embrace error rather than submit to the “bondage” of Christ’s leadership.

By contrast, a few days ago the sidebar had a link saying:

Kate and John don’t want you to be miserable anymore

I assumed this piece must be a parody, it was so over-the-top and offensive. But as I have seen others comment as though this is real, perhaps I was wrong to presume that Kate and John had more decency and self respect than to pen such a piece.

Here is an excerpt, speaking of those who are not fleeing Mormonism:

“Because it really is your choice. A weird choice, to be sure. To be frank, literally impossible to comprehend that you would choose–actually choose–bondage and darkness and humiliation when you could be an actual person, breathing the euphoric air of freedom and jubilation and glee and ecstasy and euphoria and rapture.

“But seriously, you should get help. What is wrong with you that you would want that? If you weren’t religious, we could only guess that something traumatic happened to you as a child. You must be mentally ill. Yes, that’s it. What else could explain this literally insane decision to freely participate in the LDS Church? Actually, one of us (John–Hi!) has a PhD and has done some research in this area and we can tell you that being religious is basically a mental illness.”

So is the Sparks of Joy thing a parody, or are John and Kate really so out of touch with reality that they would pen such a piece?

18 thoughts on “Integrity and Respect versus Sparking Joy”