Among the duties of my calling as the Ward Music Director, I have the responsibility to recommend and conduct “the congregational hymns for sacrament meetings.” Until now, as per an understanding between myself and the Ward Music Chairman, I have not recommended any particular hymns for her consideration. That is about to change. After an extensive data-gathering period and a bit of analysis, I am now prepared to make some recommendations.

Of course what I really wanted to see was whether we missed some hymns in 2009 that I would really like to sing and conduct.  Thus was born the hymnstogram: 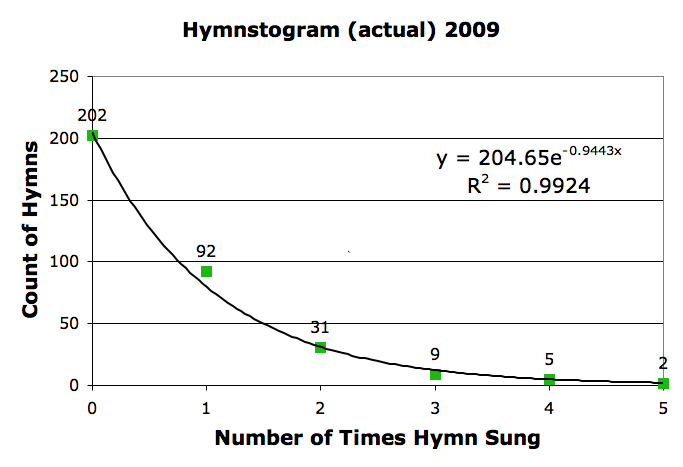 I admit to having been rather shocked that our entire 2009 repertoire consisted of only 139 of the 341 hymns in Hymns. Even more striking is the near-perfect exponential decay of the Count of Hymns with increasing Number of Times Hymn Sung. So of course I did what anyone would do. I attempted to simulate the selection of hymns for a year.

First of all, 48 sacramental hymns were chosen randomly from the 29 hymns in the designated section of Hymns. Next, I made a list of the hymn numbers that are not from the sections of Hymns labeled Sacrament, Easter, Christmas, For Women, For Men, and Patriotic, leaving 264 all-purpose hymns. Most of the opening, rest, closing, and transitional hymns were randomly chosen from the hymn numbers in this list. However, for four weeks these hymn events were chosen from the Christmas section, and for two weeks the opening hymn was chosen from the USA-themed hymns in the Patriotic section.

The rest hymns were a little different, because (as the astute reader will recall) we only sang a rest hymn in 19 of the 48 possible weeks. Thus, attempting to get approximately that number of rest hymns, each rest hymn in my array of hymns would only select a hymn if a random number was less than 19/48. Otherwise it would return a null value, which was then ignored in my analysis.

I ran the simulation 10 times, each time recording how many hymns were sung zero times, one time, and so on up to seven times. I averaged these counts and made a graph of the results. 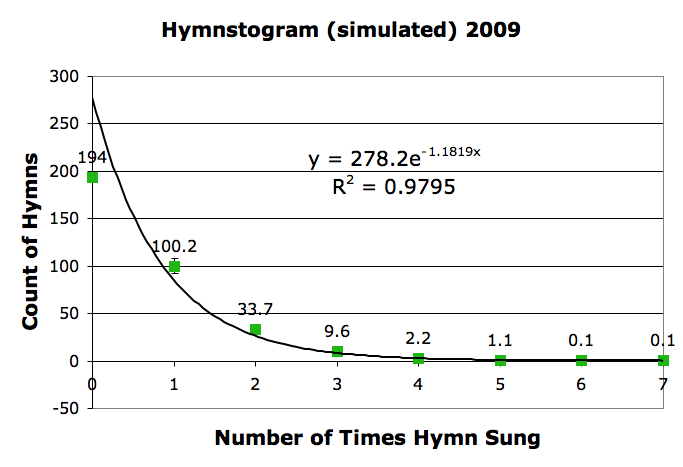 Here are my observations from the results of the simulation.

What does this mean? Does it imply that my Ward Music Chairman is selecting hymns in the same pseudo-random way my simulation works? Not at all. On the other hand, she has several things to consider as she selects the hymns, including the following:

Please note that I expect that a hymnstogram for the typical ward in the US (and perhaps beyond) would look about like mine. My Ward Music Chairman has done a wonderful job in selecting all the hymns, especially considering that I made no recommendations to her. No recommendation I make should be interpreted as criticism of the valuable work she has done.

Without further ado, here are the hymns that we didn’t sing in 2009 that I would really like to sing and conduct in 2010 (note that two of them are already checked off!). I’ve also given some explanations for why I love these hymns. An appendix with all 202 hymns we missed in 2009 follows.

Let me know in the comments if there is a hymn that I haven’t listed here that appears in the appendix and that you would recommend, as well as why you like it.

That’s 46 hymns. If we sing one each week we’re golden!

Here is the complete list of the 202 hymn numbers that were not sung in 2009.