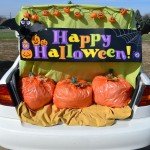 It is no secret that I love Halloween. From when I was young the holiday has been a fun celebration to start the holiday season. Few other times can freaks and the imaginative come out in the open while embraced by the mainstream. Children get permission to eat candy and talk with strangers. It becomes one huge community get together no matter what religious or cultural difference exist. It is the community aspect that has recently become in danger of disappearing.

Halloween has a long and storied history. Some historians believe it started with the Romans while the most recognized origins come from the Celtic Pagans. Wherever it came from, the holiday was a symbol for the coming winter months after harvest. Today that reason has been overshadowed by ghosts, goblins, and witches brew. Perhaps pumpkins and corn mazes are among the last reminders this is a fall festival.

To be clear, trick or treating is a relatively recent invention developed in the 1940s to protect against vandals. Before then, and especially after WWI, “trick or treat” was a serious threat. Bands of roving children and adolescence would break windows, ruin property, and start fires. You were more likely to be tricked than hand out treats. The Julie Garland musical Meet Me in St. Louis has a scene that represents the more chaotic celebration with bonfires of burning furniture. The characters hurry home before getting caught in the escalations.

After WWII parties were given for children to enjoy. Adults generally stood back and participated as families. Despite the more benign celebrations, vandalism continued to be the main feature of the holiday for the next couple decades. The state of Minnesota decided to once and for all take care of the roving problem and hold a Halloween parade. Children dressed in costumes walk in the streets in an organized cavalcade along with supervising adults. Soon after, the house to house treat gathering takes over throughout the United States. Vandalism continued, such as the Detroit arsons that took place for years, but as more isolated incidents. A new era was born from the ashes of misbehavior.

Basically, the community takes over. Neighbors that otherwise would not be contacted even during Christmas have total strangers knocking on their doors. Few houses are darkened to the annual event. This has gone on for years in smaller towns while larger ones even participate. How many lifelong friendships this might have created cannot be calculated.

As so often happens, fear and gossip slowly reshapes the community closeness. News reports sweep the country that the candy is poisoned or razorblades put inside apples. Having the sweet booty put under an x-ray machine becomes common. In order to combat against the rare tragedy, there developed a sort of hybrid activity of children’s party gathering and trick or treating. Church parking lots, among other places, fill up with cars with the back ends opened up to hand out treats to the wandering children.

The new trunk or treat tradition erodes neighborhood visits. At first the adults take children to both, but that becomes increasingly time consuming. Often the parents decide between one or the other. Because there isn’t as much ground to cover, trunk or treating is preferred. Slowly doors are less knocked on and strangers once again are left mostly alone. In some areas the trunk or treat has become exclusive enough that even that has shrunk in participation, and not replaced by the traditional method.

There is no slowing down of Halloween celebrations. Haunted houses, costumes, corn mazes, and yard decorating is as strong as ever. What has changed is the mix of family and community as part of the rituals. Not that it has become extinct, but trick or treating seems to slowly be fading. Maybe this is the case of chicken and egg question where Halloween only follows what is happening in the wider culture. Individualism and adult public entertainment is superseding good clean fun. Those who might be critical of this conclusion might want to visit a costume store.

13 thoughts on “How Halloween is Hurt with Trunk or Treat”