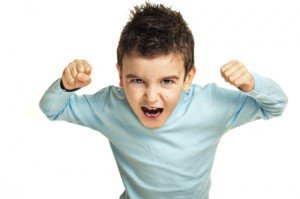 Dealing with tantrums is the part of parenting which most parents dread. They hope their sweet little baby will not ever hit the toddler tantrum phase or the even worse teenage temper tantrum phase.

As a young mother, I was just as afraid of toddler tantrums as the next person. Then it happened, my sweet, good natured little boy switched in to a power struggling animal.

This was my first child, I didn’t know what to do.

I remember one day, when he was three years old, I told him he couldn’t have a certain snack he wanted and the next thing I knew he was in his room throwing his brand new metal Tonka dump truck against his wall.

As I asked around I realized I was not alone in my parenting ignorance. It seemed like even God was trying to help me feel better by allowing me to be behind other out of control children in a check out lines at the store.

The poor mothers would smile at me and I would smile back with that, “I understand. Don’t worry about me being offended…my child does the same thing” face.

While my son was still three years old, and when we started doing foster care for troubled teens I finally learned how to control an out of control child; no matter the age. There were ways to talk to out of control children that really worked. There were certain structures which were better at solving parenting problems than others.

Our journey toward self-government as a family had begun.

For years now I have been sharing the principles I learned so well at that impressionable time of my parenting life.

People all over the world still wonder how to stop tantrums and attitude problems, but now I can offer some help.

In my book, Parenting A House United, I talk about the principles and skills our family has used for many years now to stop temper tantrums and attitude problems.

Remember the point is not to cause the child pain. The point is to be consistent enough that the child chooses to have a change of heart.

Just so you know, my oldest boy chose to stop having tantrums at age three as well because I changed the way I communicate with him. I made sure I understood him more, pre-taught him the skills he needed to learn and kept the tone of the home safe and secure. When I made these changes he changed too. He no longer felt the need to battle with me. Instead he calmly talked to me about his needs. Self-government works. His quick change was all the proof I needed. No other child has had tantrum problems like he did. When the anxiety in my home went away, so did the tantrums.

4 thoughts on “Help My Out Of Control Kid!: How To Handle Temper Tantrums”