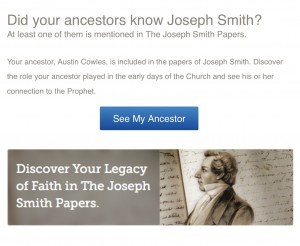 I got a cute e-mail from Family Search this morning. Did I know, they asked, that one of my ancestors is mentioned in the Joseph Smith Papers?

Before opening the e-mail, I considered who they might be talking about. Perhaps it was Jonathan Holmes, who helped secretly bury Joseph’s remains after his death, then helped Emma bury Joseph’s body in February 1845. It could have been Elvira Annie Cowles [Holmes], who was governess in the Smith household, treasurer of the Relief Society, and eventually one of Joseph’s plural wives. Joseph Leland Heywood, a successful merchant from Quincy Illinois, spent one day with Joseph Smith in December 1842, agreeing to be baptized in the frozen river that very night. Or it could have talked about the Bells, Scottish converts who helped build the temple, or the DeLongs, converts who arrived in Nauvoo the day the bodies of Joseph and Hyrum were returned from Carthage. Or it could have mentioned John Taylor, who was shot at Carthage jail along with Joseph and Hyrum.

But no. They mentioned Austin Cowles. Austin had been a member of the high council, a well-respected man who had served as his town’s Methodist preacher before embracing Mormonism. Austin was crippled, and his distinctive gait was well-known in Nauvoo. To the end of Joseph’s life, Austin had faith in the restored gospel. It is likely he helped craft the following statement:

We all verily believe, and many of us know of a surety, that the religion of the Latter Day Saints, as originally taught by Joseph Smith, which is contained in the Old and New Testaments, Book of Covenants, and Book of Mormon, is verily true; and that the pure principles set forth in those books, are the immutable and eternal principles of Heaven, and speaks a language which, when spoken in truth and virtue, sinks deep into the heart of every honest man. — Its precepts are invigorating, and in every sense of the word, tend to dignify and ennoble man’s conceptions of God and his atributes[sic]. It speaks a language which is heard amidst the roar of Artillery, as well as in the silence of midnight: it speaks a language understood by the incarcerated spirit, as well as he who is unfettered and free… 1

Unfortunately, these lovely sentiments were published after Austin Cowles had secretly plotted to murder Joseph. Austin had been counseled, but when he persisted in opposing to Joseph, he had been excommunicated.

Yet Austin was loved by his daughter, who traveled to Utah and raised her children in the Church. Once it became clear that saving ordinances were to be performed for ancestors, Austin’s grandchildren went to the temple and performed these ordinances for Austin and those Austin loved.

So for Christmas, let us think of our families, those we love. Are there any for whom saving ordinances haven’t been performed, for whom it would be appropriate to do the work now? 2

If my ancestor, who plotted to murder Joseph, has been offered the saving ordinances, please do not hesitate to offer your own loved ones these great blessings.

7 thoughts on “Give the Gift of Salvation”