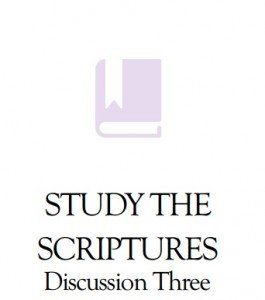 In this third discussion, we are asked to read a large number of scriptures and several recent talks by leaders of the Church, mainly male but also female. There are no talks from Dialogue or Sunstone in the suggested pre-requisite reading for this discussion. The decision to frame the third discussion solely around official church sources was because the organization publishing these discussions “takes seriously the words of church leaders and holds sacred the scriptures.”

Having read the scriptures and talks, I was then confused at the way the discussion proceeded to wrest those talks and scriptures to suggest that women must necessarily hold priesthood keys because all are alike unto God.

Looking at the end of the discussion, the authors added references to several articles examining women and priesthood that have been published in Dialogue and in books published by Signature Books.

The Historical Background of Women and Priesthood in Mormon Circles

I was curious about the date of the Dialogue article, since “Volume 14, No 4” doesn’t immediately equate to a year in my mind. In learning that V14:4 was the Winter 1981 edition of the journal, I came across an intriguing letter to the editor, written by Terrence L. Day in response to Mary Bradford’s interview of Sonia Johnson published in V14:2:

“[Sonia Johnson’s] case would seem to be an almost classic representation of apostasy. A person begins with a complaint, even a justified complaint, and lets the pursuit of it completely unbalance them. They lose their equilibrium and soon are finding fault where fault does not lie. At some point pride runs away with reason. It is painful to admit–even to one’s self–that one has been wrong, so one begins to lay the blame at the feet of others, turning from one apostasy to another, adding apostasy to apostasy…

“She has become so radical and vehement in her attacks on the presiding brethren that it makes it difficult, if not impossible, for active Latter-day Saints to be members of [Mormons for the Equal Rights Amendment].

It is useful to realize that the philosophical underpinnings of the current debate regarding women and priesthood lay in the decades-old debate about equal rights, a debate which was marked by the very public defection of Ms. Sonia Johnson from the Church. Having been a mature teen in the DC area when Ms. Johnson’s activities were occurring, I recall being instructed on the nature of Church discipline. Ms. Johnson had called for people everywhere to reject Mormon missionaries, which as a teen was what I was given to understand had been the final straw.

Back in those heady days, I remember my mother bundling us daughters up in our car, which she had plastered with signs questioning the wisdom of the proposed Equal Rights Amendment. The one sign I particularly remember was:

What do you do with a pregnant draftee?

Mom proceeded to drive around DC for a couple of hours. I only recall one individual who attempted to engage Mom in discussion. It was a man who noticed the signs from the other side of the street and started yelling and running towards the car. As the individual appeared to be a potential threat, Mom just kept driving.

Case History of Granting Equality: The US Military

Fast forwarding several decades we now have a time when men and women serve together in nearly all aspects of the military. The question of what to do with a pregnant submariner ended up precipitating the end of smoking privileges in submarines, as it turned out those things that would harm a pregnant submariner harm all submariners.

The draft is a distant memory, so concern about a pregnant young woman being forced onto the front lines has been replaced by the reality of tens of thousands of instances of sexual assault per year, the vast majority of which victimize women soldiers, sailors, and airmen. It appears 80-90% of sexual assaults remain unreported. Of those that are reported, only 10% result in conviction of the perpetrator. In 90% of the cases, the victims themselves are involuntarily discharged from the military. 1

In the case of the US Military, equality has also been driven by a recognition that men, alone, will not be able to staff and perform the missions of the military. So even though there are allegedly tens of thousands of victims of sexual assault per year, this accounts for well less than 1% of those in active service during that year.

The benefit of this integration in the military has been the shifted reality where women and men are taken seriously, for the most part, throughout the organization. I remember the days when women such as me were routinely denied opportunities based on being female. Those days are largely over.

And yet, there has been a cost, a cost borne by tens of thousands of sexual assault victims per year.

The Dialogue Within the Church

The talks cited in this discussion show how the Church leadership is laying the groundwork to make it clear that women do exercise priesthood power in the fulfillment of their callings. The cited talks were:

When arranged in chronological order, we see that the first cited expression of identifying priesthood power as available to all was articulated by Linda K. Burton, Relief Society General President.

Those seeking female ordination will note that Sister Burton’s remarks follow the formation of their own organization by several weeks. Reasonably, then, one could see the public dialogue from the Church expressing female access to priesthood power as having been elicited by the activities of their organization.

These recent talks, however, were not the first time Church leaders have discussed that daughters of God have access to “every spiritual gift and blessing that can be obtained by his sons.” Joseph Fielding Smith’s comments during the April 1970 LDS General Conference read:

I think we all know that the blessings of the priesthood are not confined to men alone. These blessings are also poured out upon our wives and daughters and upon all the faithful women of the Church. These good sisters can prepare themselves, by keeping the commandments and by serving in the Church, for the blessings of the house of the Lord. The Lord offers to his daughters every spiritual gift and blessing that can be obtained by his sons, for neither is the man without the woman, nor the woman without the man in the Lord. 2

[As an aside, in those days Church periodicals contained advertising. I was amused by the spread on pages 50-51.]

And of course Joseph Smith spoke of great privileges for the women during his addresses to the Relief Society in 1842.

The Cost of Agitation

It seems clear that those demanding female ordination have provoked a thoughtful response from Church leaders, both male and female, enriching the understanding of how women already utilize priesthood power in their Church service.

To me it is also clear that the demands for female ordination have provoked a clear delineation between power and keys, with a firm stance on the part of the Church that the keys are not at this time shared with women.

In response to this, will those seeking female ordination say, “Oh. That’s alright then.” Or will then continue to demand a privilege again and again and again that they have been told is not available at this time?

Will those seeking female ordination continue to vehemently insist that priesthood ordination is the only concession that will satisfy them? In so insisting, will they risk losing their equilibrium and finding fault where fault does not lie? Will they allow their pride to run away with reason, as Ms. Johnson so allowed in her day?

Joseph once persisted in asking several times after being told, “No.” His persistence was ultimately “rewarded,” but the concession had dire consequences.

Persistence can be a virtue, but I suggest that the single-minded focus on female ordination may not be an area where persistence is universally beneficial.