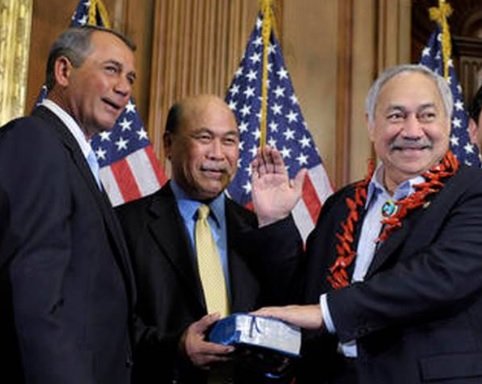 Eni Hunkin was always a jolly presence, in his lavalava and bolo. During the decades he lived in our congregation, Eni and his wife, Hina, were part of what made Annandale a wonderful place to be a Mormon.

I remember the fabulous luau we held one year, with a large pig roasted in a pit in the woods behind the Church. While Eni and Hina seemed to stay eternally young, their children grew from small tikes into tall and gorgeous adults.

A number of years ago we were saddened to learn that Eni and Hina would be moving from their townhome off of Backlick Road in Annandale to Provo, where they could be nearer to their children.

One of the things I think Eni brought to Annandale was an appreciation that not every Mormon is a Republican. It would be impossible to get too stridently “the right is right” with Eni’s twinkling Democratic smile looking at you from the back pew.

Eni was my seminary teacher during the year when we studied the Book of Mormon. I recall his telling us that the founding story of the polynesian people correlates with the story of Hagoth, “an exceedingly curious man” who built a large ship “and launched it forth into the west sea, by the narrow neck which led into the land northward.” 1. The Book of Mormon speaks of the other ships that followed, and “they were never heard of more.” I treasured Eni’s youthful certainty that his people were descendants of Hagoth’s sea-faring adventurers.

Farewell, Brother Hunkin. May we meet again in the land beyond, where we are no more strangers and foreigners but brothers and sisters with an eternity to spend together.

2 thoughts on “Death of a Giant – Farewell Eni Hunkin Faleamavaega”