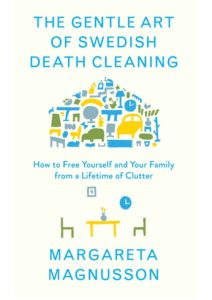 “To hunt for misplaced things is never an effective use of your time.” – Magnusson

In 2011 Marie Kondo gave us The Japanese Art of Decluttering and Organizing as a bright young woman who had spent her short life being organized. At the time it is not clear she had to share a household with an uncooperative spouse. Children did not come into her life until years after she told us there was a magical way to be organized.

Where Marie Kondo speaks from idealistic youth, Margareta Magnusson talks to us from her age, “between eighty and one hundred,” a matriarch whose grandchildren are now adults.

In The Gentle Art of Swedish Death Cleaning, Magnusson tells us that the Swedes have a word for dealing with the life possessions of a person when they are no longer around. And though the point is to be considerate of the burden others may bear upon your passing, it doesn’t hurt that your life is easier when everything has a place and you don’t retain things you no longer need.

Magnusson is an artist, and the book is illustrated with her delightful drawings such as a favorite dog, a treasured wok, a day skiing in a bikini, and a basket of blossoms like the ones her mother-in-law introduced to Sweden from Japan in her Mt. Fuji gift shop.

As Magnusson told of her three formative “death cleaning” instances, I realized I have experienced similar requirements to “death clean.” But in some circumstances, as a helpful member of my congregation, the time allotted to accomplish the task was hours rather than the weeks Magnusson had.

Magnusson’s first death cleaning occurred when her mother passed away after 46 years of marriage. As Magnusson helped her father move to a smaller apartment, she found messages attached to many items, specifying what should be done. Even though illness had prevented Magnusson’s mother from performing the actual dispositions, she had taken responsibility for her things in a manner that made it much easier for her loved ones.

“At the time, I never realized how thoughtful she was.”

Magnusson’s second death cleaning was for her mother-in-law. This time there weren’t little labels on items, but the job was made easy because the older Mrs. Magnusson had gifted many of her possessions to family and friends throughout the last years of her life.

“Your favorite oracle and problem solver is no longer around… to make life easier.”

The third death cleaning Magnusson discusses was following the death of her husband of forty-eight years, following a long illness. Looking to her future, Magnusson prepared to move from their large home with an extensive garden to an apartment with a balcony. It took almost a year.

Retaining Memories rather than Stuff

“Living smaller is a relief.”

Throughout this delightful volume, Magnusson shows us by example how she dealt with lightening the load for loved ones. Where many organizing books are full of checklists, Magnusson’s book is full of tips delivered in conversation, the way one might learn from a good friend during a pleasant outing. She is authentic and delightful as she shares how she has dealt with possessions, both in putting them away from her life and in a couple of cases keeping them long past official need.

Why Do I Say This is a Uniquely Mormon Issue?

My formative “death cleaning” was when my paternal grandfather died a few years after our grandmother. My sisters and I had a single day to clear out an apartment full of our grandparents’ possessions. That was the event that made me swear I didn’t ever want to make someone else have to clean up like that after I was gone.

Mormons are unusually likely to be asked to help in such a cleaning.

In addition to the enhanced likelihood that we, as Mormons, may be asked to assist in such an effort, there is the concern we, as Mormons, have about the family history implications of wholesale destruction of ephemera.

Finally, I have seen families torn apart by disagreements over matters when a loved one passed. Magnusson puts her gentle art forward as consideration and politeness, but it is also a matter of loving and maintaining relationships. Taking responsibility for ensure our “stuff” doesn’t harm surviving loved ones is uniquely a concern for those who believe families are forever.

So I suggest we evaluate our current holdings in light of the time and effort they divert from the things we’d rather do and in light of the burden others will bear if we don’t take responsibility ourselves.

And if that seems overwhelming in light of young children or active teenagers, take heart. Magnusson suggests death cleaning need not become a significant priority until age 65.