The Church has spoken out against abuse by everyone, particularly members. But abuse happens. And there are factors that make it difficult for abused persons to be believed.

Sunday evening I had a chance to hear Jennie Willoughby speak, the first time she’s publicly discussed the abuse in her marriage with a dominantly Mormon audience. 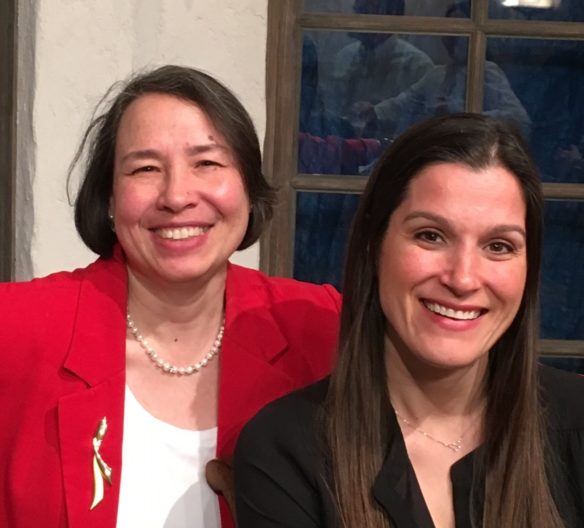 Jennie reports that she didn’t notice anything untoward in her whirlwind courtship with Rob Porter, a rising legal professional with strong ties to Mormon leadership. A recent convert, Jennie didn’t notice Rob wasn’t taking the sacrament when they first met. The fact that Rob had a prior failed marriage didn’t raise red flags. One instance of anger during their courtship seemed understandable at the time. In retrospect, it was a precursor of the terror that would ensue.

Weeks after marrying Rob, Jennie burst into tears in a temple recommend interview when asked if there was anything of concern in her relationships with family members. 1 The stake leader, who had been Jennie’s bishop when she joined the Church, requested Jennie talk with her Bishop. Jennie admits that she wasn’t able to clearly articulate to her bishop the way in which she was being verbally abused or the ways in which intimate relations between herself and her husband felt wrong. Jennie separated from Rob. When Rob destroyed the window in the door to her apartment in anger, the police warned her she may not be safe. But Rob apologized and they reconciled. Then an angry Rob grabbed Jennie by the neck when she was in the shower, terrifying Jennie enough to take steps to end her marriage.

I myself have been involved in toxic situations. This week my physician asked how I came to have a fracture to my eye socket, an old injury the eye doctor noticed earlier this year. I honestly don’t know whether the injury occurred in the late 1970s, when my father beat me, or in the early 1990s, when my first husband beat me. I have suffered no other accidents that could account for that sort of damage to my eye socket.

I am not the most abused woman I know. A girl raised in my neighborhood, Janet Christiansen Abaroa, was brutally killed, almost certainly by the man she married in the temple. A sister-in-law was raped twice, once at Church. My daughter’s sister-in-law was also raped at Church. When I consider lesser violence against women, I can name dozens of family members, friends, and acquaintances who have suffered, often at the hands of those who were ostensibly good Church-going men. And women can be abusive as well.

Abuse happens. But why are the abused too often denied the help they need? And what can be done to reduce the problem in the future?

First, we need to acknowledge that abused people have long been ignored. Freud, the father of psychotherapy, came to believe reports of abuse were fantasy, as he could not accept that abuse was as common as his original theories suggested, given the prevalence of associated symptoms. 2

Western Christianity has long believed Eve (and by extension, all women) brought evil into the world, creating us as evil by nature. While Mormonism refutes this idea of Eve as the mother of all evil, it permeates the Christian culture in which Mormonism typically operates. Eve and her daughters are the temptresses, according to this broader Christian narrative. Anything a man does to a woman, therefore, isn’t really his fault at all.

Forgiveness of the Loved One

Even when people aren’t motivated by fear of losing of an eternal family, it’s hard to end a family into which so much hope has been invested. Add the Mormon emphasis on family, and the victim may be unable to cry out for help.

I know the reason I didn’t tell the police or my bishop about my father’s abuse was an unwillingness to be the cause of harming my father, who was the sole breadwinner for our large family. I didn’t realize my mother was unaware of the physical abuse. She had been abused numerous times over the course of the marriage.

But it isn’t just family ignoring the wrongs of the abuser. When my mother and father counseled with the Stake Presidency over the matter in the 1970s, the Church leaders figured both spouses were exaggerating. I had seen my mother being physically abused, but they hadn’t. I knew the claim that “she never cleans the dishes” was ludicrous, but they figured that hyperbole was commensurate with exaggerated reports of assault. They told him to be nicer and told her to keep the house cleaner.

After the end of my parents’ marriage, my mother learned a therapist (a Mormon bishop, then deceased) had strenuously urged my father to remove himself from the marriage, as my father’s actions were harming his wife and children. But the therapist/bishop did not share his professional opinion with my mother, leaving her in harm’s way.

It is not unreasonable that male leaders will sympathize with the men, who they know from Church worship and associated activities. The women are largely unknown, in part because of (valid) concerns that extensive social interaction can increase the likelihood of infidelity.

The bond between men who worship together is not mere supposition. Jennie reports that a seasoned Utah professional involved in judicial domestic violence hearings has never, in over twenty years, seen a Mormon bishop testify on behalf of abused women and children. When this professional has seen Mormon bishops testify, it was always on behalf of the defendant, the man accused of abuse.

Who Ya Gonna Call?

When a Mormon person is facing abuse, who do they call?

But many Mormons don’t reach out for secular professional help. We call the bishop.

News flash. Most bishops are entirely unequipped to deal with serious matters related to domestic abuse. Too many of the unequipped try to help without referring people to professionals or calling the LDS hotline.

During the final years of Joseph Smith’s life, the idea of holding leaders blameless entered ceremonial parlance. Men who were either blameless or repentant were being slandered on the national stage.

Unfortunately, the parallel idea of denouncing evil practices, no matter the position of the perpetrator, would be buried in a seldom-read book of minutes. The letter was not even shared with the secretary of Relief Society until fall of 1842, possibly because that secretary was next-door neighbor to a powerful man believed to be one of the chief culprits. This secretary would later refer to her former neighbor as a “vile wretch.”

Relief Society had been a powerful organization working side by side with Priesthood Quorums to warn the unwary and root out iniquity. But Brigham Young’s termination of the Relief Society of Nauvoo and subsequent hostility towards Emma Smith marginalized Relief Society. LDS women were only able to win reinstatement of Relief Society in the 1860s by kowtowing to male leadership. 3

Few moderns know anything about the history of Mormon power and exposing iniquity during the 1840s. These moderns live in a world where men are “the anointed” and women are taught to sustain these anointed men. So when an “anointed” man beats or otherwise abuses a woman, it becomes culturally difficult to “speak evil” of that man.

I could wish that October 2018 brings movement towards the power Relief Society originally had to minister to the women, particularly regarding abuse suffered by women and their children at the hands of the men in their lives. The changes of the April 2018 conference facilitate this change and will enable bold and visionary women to act now to protect abused women and children. But I suspect more direct instruction and supporting policy will be required to ensure all victims 4 and their nurturing Relief Societies understand this is possible.

I also hope for a day when women are formally encouraged to resume the practice of performing blessings of comfort and healing. I myself blessed my dying son, but now that I know this blessing was contrary to policy, I will not perform a blessing until policy change makes it acceptable.

Boys Will Be Boys?

Jennie’s bishop, hearing Rob had called Jennie names and been forceful in bed, suggested that men have strong urges. Apparently he didn’t ask what the names had been (something the FBI did clarify when they interviewed Jennie in early 2017 for Rob’s security clearance, including names that rhyme with “tucking stitch”). The bishop apparently didn’t consider the fact that Jennie was a recent convert and had been a sexually active woman prior to that conversion. She wasn’t a virgin shocked by the mere act of sex.

Do we know what constitutes an abusive relationship? Jennie mentioned the “Ah Ha!” moment she had reviewing the list of coercive behaviors on the website of the National Coalition Against Domestic Violence (NCADV).

But Jennie doesn’t just think girls should be taught about abuse warning signs. Boys should also be taught these signs.

How might Rob’s life be different had he been firmly taught in his childhood that rage, violence, and shaming are unworthy behaviors of a son of God? How might his life have been different if signs of such behavior in childhood were taken seriously?

Seal of the Confessional

Mormons don’t have confessional booths. But believers talk to their bishops, often as part of regularly-scheduled annual (or biennial) interviews. As seen in the case of Jennie’s interview with her bishop, it can be hard to articulate things. And there are instances where the ecclesiastical authorities say inappropriate things.

The Church recently announced that women, youth, and children may request the presence of another adult when they are interviewed by the Bishop or other ecclesiastical authority. But will there be a sign on the wall informing them of this right, as women see in an OBGYN office?

How many women, youth, and children are going to hesitate to request the presence of another adult when going to talk with their bishop? How many women, youth, and children would even know this is something they can request? Not all of us read the Trib. And if the child is concerned about one of their parents, how does this vulnerable child identify that their parent is the last person they want in the room with them while talking to the bishop?

We can’t eliminate abuse, but we can make serious inroads towards empowering victims against their abusers.

66 thoughts on “Dealing with Abuse”