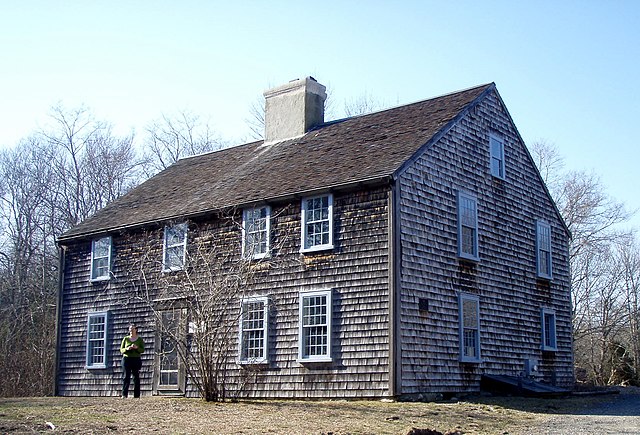 I recall as a child visiting a monument to the 1620 Pilgrims. I had no clear idea what was going on, other than that my mother was looking on the stone for names of ancestors who came across on the Mayflower.

I was a half-Asian kid who was abused at school for being other. Neighbors chased my brother home one time, attempting to “kill” the embroidered eagle on the jacket he’d received from our Chinese grandparents. The most memorable abuse left me a blubbering mess. The girls had taunted me all the way home with names I didn’t even understand, flipping my skirt up to expose me below the waist.

So it was odd to realize that I was family to those religious refugees we Americans look to each November.

The religious protesters we know as Pilgrims were Puritan Separatists who rejected the excess of both Catholicism and the Church of England. As we genealogists know, they refused to allow their children to be baptized in the Churches they considered to be corrupt. They did not agree that marriage was a religious sacrament. Therefore the generation who became Pilgrims is incredibly difficult to trace in England. They were the broken link, from a pedigree standpoint.

Days of Fasting, Days of Thanksgiving

The Catholic Church had accumulated canonized Saints for centuries. The year was effectually littered with Holy Days.

One of the primary Protestant reactions to their perception of Catholic excess was to eliminate Holy Days that were not focused on the Lord, Jesus.

Instead, Protestants would call for special days of fasting in response to overwhelming hardship. Unusual blessings called for days of thanksgiving. Though I haven’t done an in-depth study of these days, I know that there was a great outcry for a National Day of Fasting in the United States in response to the initial cholera epidemic in the early 1800s. The President rejected this call, perceiving that it was not his role to encourage the entire country to enter into a day of fasting. Incensed that the Federal government wouldn’t respond to the crisis, numerous state Governors announced a day of fasting for their own constituents.

During the first winter, the Pilgrims lost over 50% of their initial population due to disease. Though I am unaware of any community call for fasting, it seems there would have been days of individual fasting in response to the calamity of these deaths.

After the bleak winter of death and despair, it was a relief to achieve a sufficient harvest to survive the looming winter. In addition to a good harvest earlier that fall, November saw the safe arrival of the second ship full of Pilgrims, “yonge men” to strengthen the pilgrims who had arrived in 1620. These two events (harvest, safe arrival of the Fortune’s passengers) warranted a Day of Thanksgiving.

One of the catastrophes of the Pilgrim deaths that first winter was the disproportionate number of women and children who died. If I remember my published research correctly, twelve men became widowers. There were another five bachelors who survived, for a total of seventeen men lacking a wife.

The two surviving “women” were the orphaned Priscilla Mullens and Dorothy, an indentured servant serving the John Carver family.

The Fortune brought no women. Another ship populated only by males stopped in Plymouth.

Not only was Priscilla the only marriageable woman of standing to remain, her father’s assets made her a highly economically attractive match. Yet it appears she remained unwed for some time. This may have been due to her youth. She was a mature teenager, but the average age at which women had married amongst Separatists was 23. By the time she married the Mayflower’s cooper, she had potentially been courted by over one hundred men.

Dorothy would marry, but would die childless shortly thereafter. Her identity was lost to history until the 2000s. Her surname is still lost to history.

The Courtship of Miles Standish

Eight generations after the events of 1620, Priscilla’s descendant wrote a poem. Henry Wadsworth Longfellow was at the height of his popularity. His poem about his ancestors sold 25,000 copies in the first two months, reportedly selling over 10,000 copies in England on the first day it was available to that market.

Longfellow’s poem celebrated the heroism of the Pilgrims. But it was the love triangle at the heart of the poem that captured the imagination of readers.

Longfellow portrayed a contest for Priscilla’s hand, focusing on the military captain, Miles Standish, and his supposed roommate, the young cooper, John Alden. The fact of Priscilla choosing the young Alden over the more accomplished Captain Standish echoed the triumph of the young United States over the established English realm.

Two years later Longfellow published The Children’s Hour, a parent’s delight in his three beautiful daughters. Too shortly thereafter, Longfellow’s beloved wife walked past a fireplace, her gauzy skirt catching fire. Longfellow did his best to put out the conflagration, burning himself terribly in the process. His beloved wife was dead, he himself was disfigured and in the intense pain associated with burns, and the United States was caught in war.

It was in this time of despair that Longfellow wrote, “And in despair I bowed my head. ‘There is no peace on earth,’ I said.”

Establishment of Thanksgiving in the United States

Thanksgiving was celebrated from time to time thereafter. Abraham Lincoln finally agreed to make Thanksgiving a formal federal holiday. In 1863 celebration of Thanksgiving was more wishful thinking than celebration of an actual blessing. The nation was embroiled in a fierce civil war, conveyed to a literate public in an unprecedented and sobering flood of letters from the front.

Corporate Giving of Thanks

In 2018, Thanksgiving is steeped in tradition. Given Thanksgiving’s proximity to Christmas, it has become the day that kicks off a multi-week celebration focused on material giving. The Friday after Thanksgiving is often “celebrated” by purchasing Christmas presents for friends and family. The income from these purchases is tremendous, earning the day the moniker “Black Friday,” or the day in the year when many business break even for the first time.

In this sea of commercialism, Thanksgiving has remained unusually pure. It is a day of uniting with family, celebrating those items for which individuals give thanks over the past year.

I hope your Thanksgiving has been joyful and filling. May the individuals in your personal world shine in your hearts whether you have the chance to celebrate with them or yearn for them from afar.

If you are suffering, remember that those upon whose stories the Thanksgiving holiday was built suffered their own tragedies. Thanksgiving arose from tragedy, strife, triumph, and sorrow. If your Thanksgiving was anything other than picture perfect, take comfort in the fact that you are firmly in the proper tradition of those who went before you.

4 thoughts on “Days of Thanksgiving, Days of Fasting”