If there is one clear lesson from history, it is that cutting the size of government brings more prosperity. Unfortunately, this lesson is not understood by many people.

This series will show — examining three key periods of U.S. history — how cutting the size of government has increased prosperity.

Why is this important? The first reason is that our most recent period of massive government expansion — from 2000 to today — has brought widespread misery. Take a look at this chart: 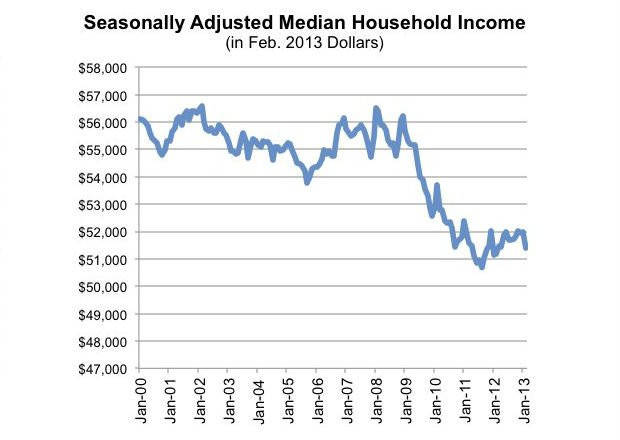 There is a clear correlation between the massive increase in government spending — which took place throughout the Bush years but really took off in 2008 — and a decrease in median income.

Here is a chart showing government spending during those same years (and projections for the next few years): 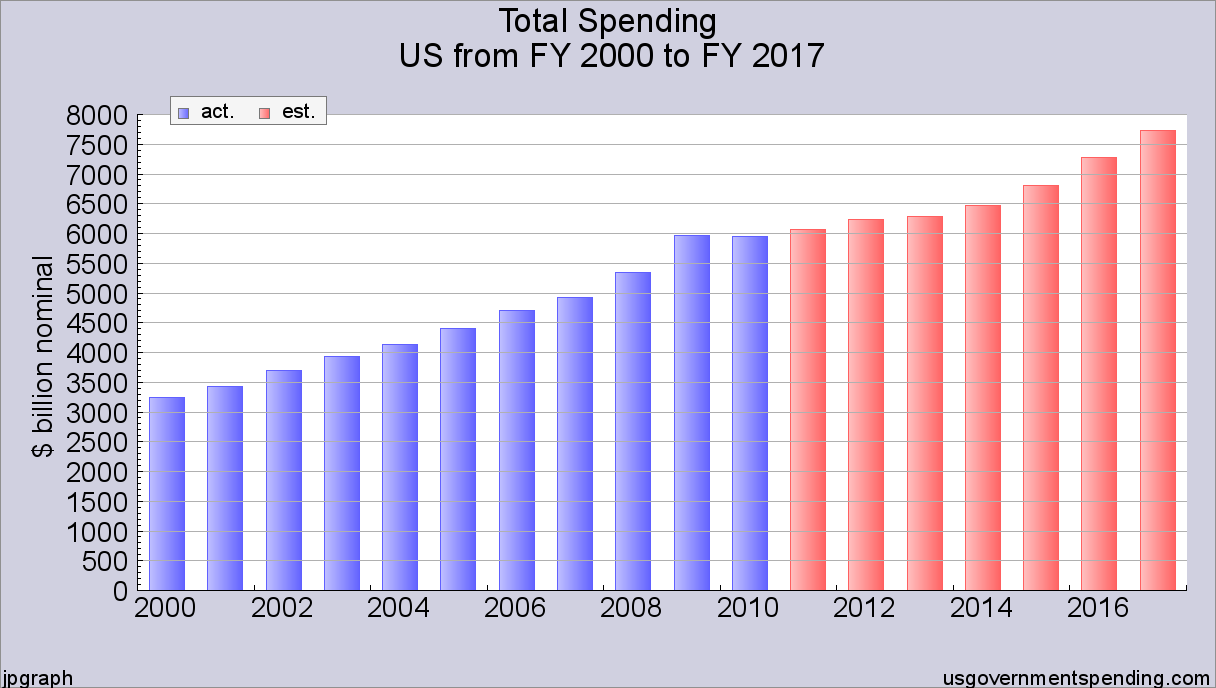 World War I meant massive government spending and huge debt in the U.S. Of course the spending and debt were even worse in Europe, but the U.S. government also spent at unprecedented levels.

Here is a chart showing spending during the World War I period: 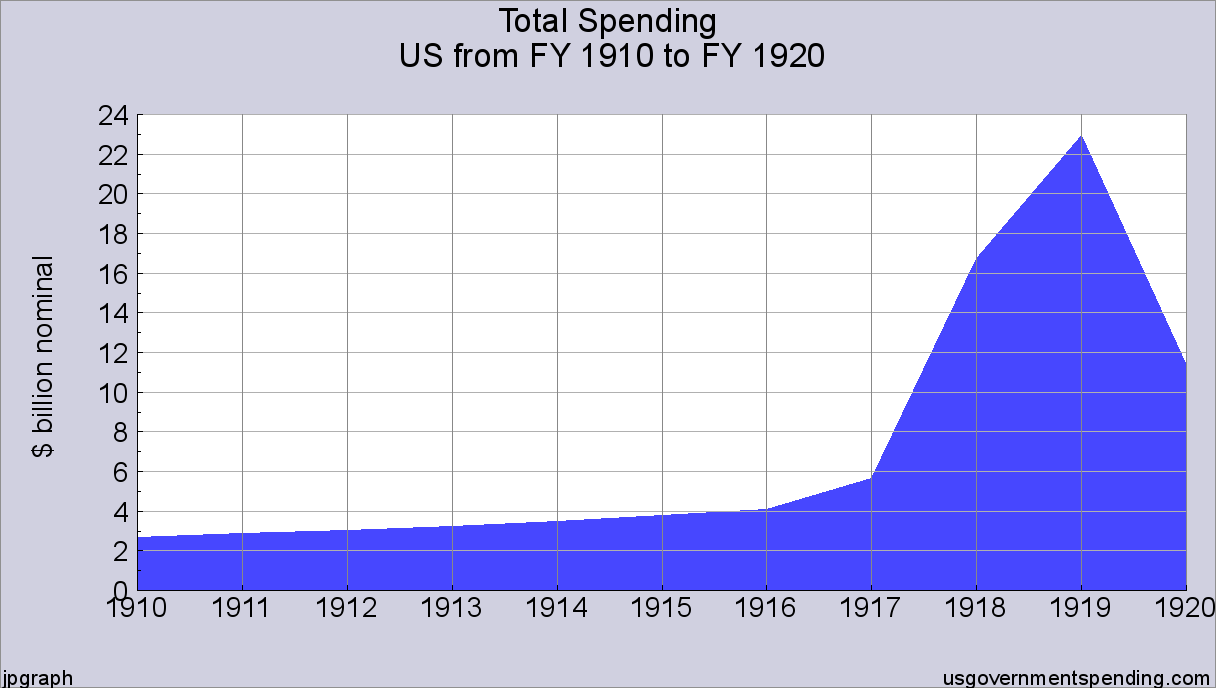 By 1920, Americans were tired of the spending and the debt. The Harding/Coolidge administration was elected in a landslide. The new administration inherited a horrible depression caused by all of the spending, but interestingly President Harding’s response was very different than what we see today. Harding responded by putting together a commission to *cut government.* Harding understood clearly that the depression was caused in part by higher taxes that were taking money away from productive people. The 1920-21 depression ended very quickly as government spending was cut. Take a look at economic growth from 1919 to 1929:

Take a look at federal government spending during the 1920s. 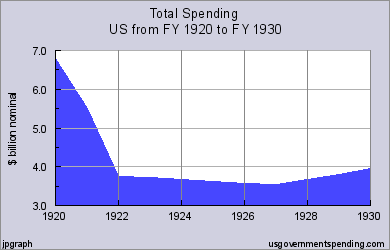 The stories of the federal government’s lack of spending during the 1920s are legion. You can read about many of them in the book “Coolidge” by Amity Shlaes. Coolidge, who was a progressive Republican on the state level when he was governor of Massachusetts, was obsessed with slashing the budget on a federal level. He held weekly meetings with his budget chief to find ways to cut the size of government. Federal departments were clearly told that the money given to them was *the people’s money* and that they should find every possible way to economize. The result was constant budget surpluses. The federal debt decreased during the 1920s in a spectacular manner: 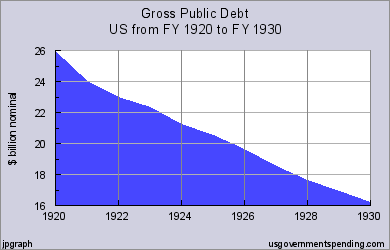 On a personal level, the 1920s was a decade of prosperity by nearly every important measurement. Electricity spread to the majority of homes, and people began using the telephone, the radio and the automobile for the first time. Innovation and productivity dominated the economy. The number of patents soared. Here is how one economist describes the decade:

Economic growth in the 1920s was impressive. Ownership of cars, new household appliances, and housing was spread widely through the population. New products and processes of producing those products drove this growth. The combination of the widening use of electricity in production and the growing adoption of the moving assembly line in manufacturing combined to bring on a continuing rise in the productivity of labor and capital. Though the average workweek in most manufacturing remained essentially constant throughout the 1920s, in a few industries, such as railroads and coal production, it declined. (Whaples 2001) New products and services created new markets such as the markets for radios, electric iceboxes, electric irons, fans, electric lighting, vacuum cleaners, and other laborsaving household appliances. This electricity was distributed by the growing electric utilities. The stocks of those companies helped create the stock market boom of the late twenties. RCA, one of the glamour stocks of the era, paid no dividends but its value appreciated because of expectations for the new company. Like the Internet boom of the late 1990s, the electricity boom of the 1920s fed a rapid expansion in the stock market.

All of this prosperity — and the decrease in the federal debt — took place while Harding and Coolidge pushed to lower taxes on a regular basis. The top marginal tax rate fell from 77 percent in 1918 to 24 percent in 1928. Middle-class taxes also went down, with a middle-income rate falling from 15 to 4 percent during the same time period. *And overall tax receipts increased significantly during the 1920s*. So, note to lovers of big government: cutting taxes truly does increase prosperity and spurs economic growth.

Coolidge became so popular because of the prosperity of the 1920s that polls showed he would have won the 1928 presidential election in a landslide. Instead, he surprised the world by not running again. Herbert Hoover was elected in 1928.

The conventional view of the 1920s has long been that it was a time of capitalist excess that caused the Depression of the 1930s. Many textbooks claim that it was the lack of government that led to the Depression. The truth — as a growing number of historians are beginning to acknowledge — is the exact opposite.

Hoover did just the opposite:

–He held regular meetings with industry to pressure them not to cut wages.
–He raised taxes.
–He increased regulation on businesses.
–He increased government spending on huge public works programs.
–He signed the disastrous Smoot-Hawley tariff, which devastated international trade.

Franklin Delano Roosevelt continued Hoover’s policies when he became president, leading to the lost decade of the 1930s, when most of the prosperity of the 1920s disappeared into a morass of big government spending, deficits and regulation.

You can read more about Hoover and FDR’s disastrous economic policies here.

Next up: the return to prosperity after World War II.