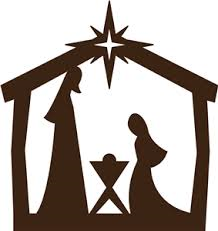 Luke 2: 7, “And she brought forth her firstborn son, and wrapped him in swaddling clothes, and laid him in a manger; because there was no room for them in the inn.” We know Christ was born into humble circumstances. There is some debate and scholarly study on what those circumstances actually were. Was the Savior’s birth in a barn? In a guest room? The family room? We won’t know that till He comes again and tells us.

I found this sweet story titled, Jesus is Born, in an old issue of the Liahona:

“Mary wrapped her baby in clean swaddling clothes and made a little bed for Him in the soft, clean hay of the manger. Joseph knew that this baby was the Son of Heavenly Father. He named the baby Jesus, just as an angel had told him earlier.

The angels of heaven rejoiced! The prophets’ promises were fulfilled. Jehovah, now called Jesus, had been born on earth. A new star shone in the heavens to announce the good news.

On a hillside an angel appeared to shepherds, and a bright light shone all around. The shepherds had never seen such a thing, and they were very afraid.

“Fear not,” said the angel, “for, behold, I bring you good tidings of great joy, which shall be to all people. For unto you is born this day in the city of David a Saviour, which is Christ the Lord. And this shall be a sign unto you; Ye shall find the babe wrapped in swaddling clothes, lying in a manger.”

Suddenly, there were angels saying to the shepherds, “Glory to God in the highest, and on earth peace, good will toward men.”

When the angels left, the amazed shepherds hurried to Bethlehem, where they found the baby Jesus lying in the manger. As the shepherds returned to their sheep, they praised God and told others of all they had seen.” 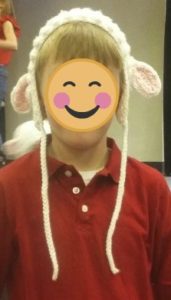 Friday night we attended our ward’s Christmas party. We had good food, pleasant conversation, and no one was hurt jumping off the stage before the program started. A sister in our ward crocheted some cute little lamb beanies for the kids to wear. As they all sat on the front end of the stage, wiggling, the calmed down right away as the piano started to play “Away in a Manger.” They were very sweet with their song. (This is one of my kids in his lamb beanie — he said he wished I knew how to make things like this. Sorry kid, I have failed in my homemaking duties with the crocheting…I can’t!)

Away in a Manger

This first version is from the Primary Songbook. It’s not a very musical rendering, but this is my favorite arrangement of this song. It’s very sweet to hear children sing it.

This is the more traditional melody, sung by the Tabernacle Choir.

The Cradle in Bethlehem — now this is the song I love the most. It just helps me appreciate Mary’s motherhood. She was a mother, rocking her beloved baby, just like all of do when we have a new baby. Here are the words: