Book Review: To Defend Them By Stratagem, Fortify Yourself with Book of Mormon War Tactics, by Michaela Stephens 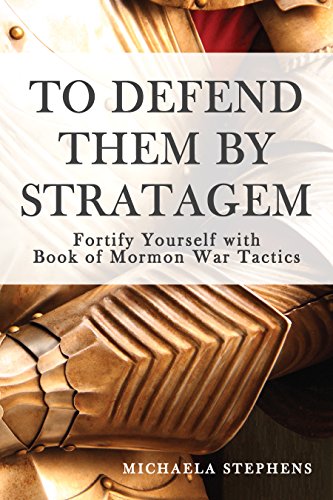 While there are deep scholarly looks at the battles in the Book of Mormon (e.g.; Warfare in the Book of Mormon, by Hamblin and Ricks), this is perhaps the first book I’ve read that examines the war chapters in order to assist us in our daily battle against sin and temptation.

The book contains about 40 short chapters, each looking at events involved in the various wars, including preparation for war, strategies for winning war, and reasons each side had for war.  Chapter headings include: King Benjamin’s Nearly Invisible Battles, Clash of the Worldviews, King Noah’s Paranoid Panic Mode, The Back-story to Captain Moroni’s Meteoric Rise, Hard Things First, A Type of Christ – Frees the Prisoners of Gid, Coriantumr’s Blitzkrieg, and too many more to mention here.

Stephens gives an honest assessment of issues surrounding each event and sub-event involved in the conflicts discussed. Because the Book of Mormon is fairly brief in its discussions of these events, the author often extrapolates from the evidence available, what she believes leads to various people being who they are, and how events unfold.

For example, she discusses the meteoric rise of Captain Moroni as captain over the Nephite armies at the young age of 25. She looks at how he could have been prepared for such a responsibility, by looking at the available evidence. She notes that there were three major battles during Moroni’s lifetime previous to his taking command of the army. Each of these conflicts affected him in different ways, and prepared him. Lehi was leading an army in battle when Moroni was about 17, motivating Moroni to use Lehi as one of his chief military leaders. They would become great friends. Was Moroni a soldier under Lehi in an earlier battle?  We know that an earlier general sought Alma’s prophetic guidance in finding where the Lamanite army took prisoners, and this is something Moroni would also do – something Stephens points out to us, showing us levels of depth in the scripture that many of us would miss out on.

In fact, while tying the ancient strategies to modern methods to overcome the world is an important strategy for us today, Stephens’ strength in the book often comes forth from her extrapolation. I feel I understand King Noah, Captain Moroni, and many others better, thanks to her suggesting important links and ties.

Her last chapter is definitely a classic for today. It is entitled: Book of Mormon War Chapters as a Crash Course in Strategy for Combating Pornography. This chapter is a bit longer than the others, but gives a solid foundation for declaring war on pornographic addiction.

For me, this was a fun book to read. I often review scholarly books that are loaded with information, but require effort to remain awake. However, this book provided a good balance between learning and readability. This book provides a wealth of information, while moving briskly along. While in some chapters, she may rush a little through tying the ancient methods to our day today, Stephens’ close look at personalities, covenants, faith, strategies, and the chaos of war, opens doors for us to discover anew how to use the Book of Mormon in our daily lives.

1 thought on “Book Review: To Defend Them By Stratagem, by Michaela Stephens”