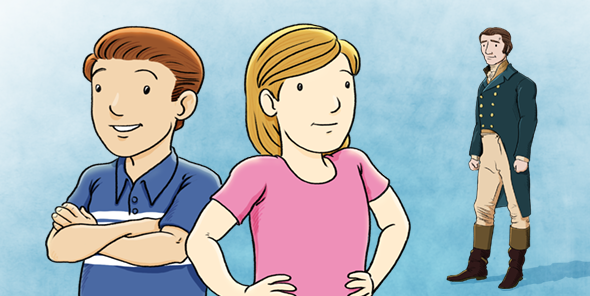 Libertarian political thought is booming in the United States with hundreds of new books published on the subject every year. But almost none of those books have been aimed at younger students. According to a blog post by guajardomarks.com, LDS author and political activist Connor Boyack is trying to fill that void with a new book titled “The Tuttle Twins Learn About the Law.”

The book follows the nine-year-old twins as they consult with a wise older man who is their neighbor as part of a school project. The man (named Fred) helps them consider just and unjust behavior and points out that immoral behavior does not become moral if members of the government do it.

One of the key exchanges is this:

“True laws protect people and their property from plunder,” Fred explained. “When true laws exist and are respected, people work hard to improve their lives and they work peacefully with others. Everyone prospers together and is happier.”
Ethan wrote down “True laws protect people.”
Fred continued, “When there isn’t any legal plunder, people rely on the kindness and service of others for the things that they need.”

Fred’s teachings are based on the 164-year-old book called “The Law” written by French author Frederic Bastiat. Bastiat was not an anarchist and favored some government but pointed out that government, even well-intentioned, justifies immoral acts in the name of collective action.

So, how did the Tuttle Twins book do with actual young people?

I read the book to my three young boys, ages 8, 6 and 3. All three of them were very interested — even the 3-year-old. All three of them know every well that stealing is wrong. They agree that hiring somebody else to steal for you is also wrong.

How does this apply to their understanding of government? Well, we will have to see, but at the very least they found the book interesting and asked many questions as we read it through. (To be fair, the three-year-old lost interest about two-thirds of the way through, but the two older boys were hooked).

This book will provoke the usual hatred from the usual people who have nothing but disdain for libertarians. I can already hear the whining about feeding propaganda to kids.

But I would make an alternate argument: progressives, liberals, socialists and traditional conservatives could use this book as a primer for beginning the discussion on what level of government is appropriate. Progressives could point out that government is needed to protect the poor who would be otherwise abandoned, etc. Bastiat’s works are important for any well-read person, so intellectuals of all kinds should not have a problem exposing their kids to “The Law,” and this book provides an easy way to do it.

Libertarianism has a huge practical problem that has been pointed out on M* and elsewhere: many libertarians say they want little or no government, but government continues to increase in size, so how can any libertarian expect their recommendations to ever be implemented? (For one answer to this question you can see this post.)

The Tuttle Twins book obviously does not address this issue, but parents reading to their children might be interested in doing so. In any case, speaking as the parent of five kids, I think it is important to have your kids begin to think about the Big Issues, even at a relatively early age.

Boyack plans on creating a series of books on the Tuttle Twins where he addresses various issues related to liberty. I welcome the next book in the series and can recommend the first book to parents of all political perspectives.

19 thoughts on “Book Review: ‘The Tuttle Twins Learn About the Law’”