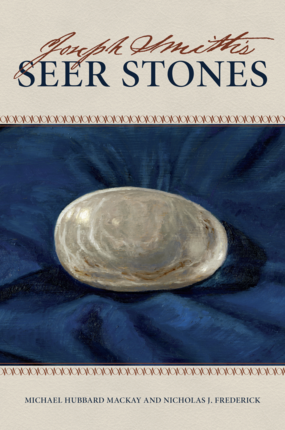 We live in a great time for Church history. The Church has opened their archives to create the Joseph Smith Papers Project. It now has official statements on controversial historical and doctrinal issues. It is embracing the Internet. It is now dealing with the skeletons that have been trying for decades to escape its archival closet.

With the new openness to history, the Church recently published a photograph and basic information regarding one of Joseph Smith’s Seer Stones (Ensign, Oct 2015, https://www.lds.org/ensign/2015/10/joseph-the-seer?lang=eng )

There clearly is a continued interest and need for a more thorough discussion of Seer Stones and Joseph Smith. Were there more than one? What is the provenance of these stones? How did Joseph use them? How important were the stones? What about magic and money digging?

Michael Hubbard Mackay and Nicholas J. Frederick have given us a quality product that helps to answer these and many other questions. The book is 8 chapters long, with 6 appendices, and an extensive annotated bibliography. Each chapter has sufficient endnotes for those who wish to look at primary sources, and do more study.

While the book will be useful for scholars, it is written with the average reader in mind. The book is filled with paintings and charts that enhance the mystery being unraveled by the authors. I appreciated the fact that none of the paintings showed Joseph translating directly from the plates of the Book of Mormon, as has been in the past.

Unlike some other LDS historical books, Mackay and Frederick did not shy away from using all sources, including some that are clearly anti-Mormon. Both LDS and non-LDS Mormon historians are referenced, including non-LDS historians Dan Vogel and D. Michael Quinn, so the volume will also appeal to non-LDS scholars interested in researching Mormonism.

The book explains what seer stones are, how they are related to the Urim and Thummim, how common they were in Joseph’s day, the issues of magic in relation to religion, what the Book of Mormon teaches us about seer stones, and what the Urim and Thummim in the Old Testament and the white stone* in John 2:17 and D&C 130 mean to both LDS and non-LDS today.

I appreciate the fact that the authors reviewed the key theories, and discussed the probabilities of each theory being correct, comparing statements by various people that knew Joseph in his early years, or who had been interviewed by others later on.

The book discusses possible ways in which the translation process occurred, noting Royal Skousen’s theory of a tight translation, where Joseph received the translation word for word, but also explaining Brant Gardner’s theory of a less tight translation that allowed Joseph to add some of his own terminology and interpretation into the process. As I’ve looked at the evidence over the years, I see evidence for both: a tight translation in some things, but also how documents were used by God as a catalyst for Joseph to receive new revelation (such as the Book of Moses coming from Joseph’s “translation” of the Bible).
While I knew Joseph Smith had at least one seer stone, it surprised me to know he may have had as many as five stones, and encouraged other members to go find their own “white stone.” The two most likely stones Joseph owned are the brown stone (seen in the Oct 2015 Ensign), and the white stone that Wilford Woodruff consecrated on the altar of the Manti Temple. The provenance of these two stones is discussed, along with a possible green stone that is also mentioned.

One of the best parts of the book is the discussion on the scriptural significance of seer stones. While many thought that the stones were just a temporary crutch to teach Joseph how to receive revelation, Mosiah 8 and D&C 130 insist that it is the special stone that makes the Seer. For me, the authors succeeded in explaining just how important seer stones were for Joseph, and how we should also marvel at them in our day. Joseph’s use of them, first in treasure hunting, was a normal effort that many did in the Palmyra area in his youth. The book points out, however, that only Joseph transformed this skill from money digging to actually having sacred words revealed about ancient peoples.

Perhaps the one thing they did not touch much upon, and perhaps it is due to the sensitivity of the subject, is why the information on seer stones was kept so secretive by the Church over the years. They do note, “This stone may have remained in the hands of the Presidency for decades, but it is clear that Church Historians like B.H. Roberts knew nothing about the white stone.”

Also missing is a discussion on why the Church’s stance for many decades was that Joseph Smith only used the Urim and Thummim to translate the plates, and never the seer stones. While other historians were insisting that the seer stone was the primary tool used for translation, Joseph Fielding Smith (as Church historian) was claiming otherwise. My personal belief is that he was attempting to protect the family name by writing faithful history versus writing all of the history. Unfortunately, such actions may have allowed for much criticism over the years, and questioning on what the Church was hiding. This was especially true in the early years of the Internet. Since the Church made the difficult, but wise, decision to open its archives and let the skeletons come out, it has allowed LDS historians to deal with such issues on our own terms, and not the terms set by those who would destroy God’s great work of restoration . In this instance, Mackay and Frederick’s effort successfully normalizes what once was viewed as strange and magical.

Seer stones have a long and valued history in scripture. The book “Joseph Smith’s Seer Stones” is an important addition for all those interested in early LDS history and doctrine. It is a valuable tool in understanding what has long been a strange curiosity, but now is a normal part of the marvelous work and a wonder of the restoration of Jesus Christ’s Church in the last days.

*For my discussion on the white stone in D&C 130 describing modern computer technology, see http://rameumptom.weebly.com/urim.html