[I saw that some permabloggers at BCC were posting their AML reviews, so I figured I could follow their lead and post my AML reviews here]. 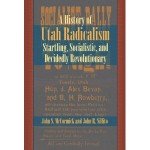 Reviewed by Ivan Wolfe for the Association for Mormon Letters
McCormick and Sillito’s study aims to put “the left at the Center” in Utah history.  This does not mean they treat the left as moderates, but that they focus on the left, putting them in the center of the frame, metaphorically speaking.  Though the title states this is a history of Utah radicalism, a more accurate title would have been “The Socialist Party of America in Utah in the early twentieth century.”  Though there are glances at socialism and other radical movements before and after the early twentieth century and some glances at other socialists in Utah (such as the Socialist Labor Party), the focus clearly is not on any and all radicalism or socialism in Utah.  The authors are explicit about this in their introduction, so while the title is somewhat misleading, the first paragraph of the introduction is very honest.
Before I say anything else, I must praise this book for three things:
1.     Its existence.  As someone whose dissertation focused on socialist rhetoric in late 19th century America, I constantly found myself disappointed at the East and West Coast focus of most major studies.  This book helps to start fill a much needed gap – a look at how socialism worked in “flyover” country.  Whatever faults it may have (and I will discuss those later), it’s existence and the lack of other similar studies makes this an indispensable book.
2.    This book has footnotes at the bottom of the page. I am willing to forgive a multitude of sins for that one wonderful virtue.
3.    The authors maintain a wonderfully neutral tone.  Though I’m fairly sure it’s clear where their sympathies lie, they made a valiant and successful effort to avoid cheerleading any one side.  In an era when (I feel) too many scholars have decided that since objectivity is ultimately unachievable they should abandon the attempt, it’s nice to see some historians doing their best to present the information and let the reader come to their own conclusions.
That said, I have three complaints about the book beyond the misleading title:
1.    The book is structured so that it covers the same time frame multiple times.  For example, instead of treating the movement chronologically, they discuss it through its various aspects.  For example, chapter 8 deals with socialist newspapers, whereas chapter 10 deals with lectures and public debates.  Chapter 4 deals with membership and chapter 7 deals with social and cultural events (dances, music concerts, etc.).  This topical focus causes them to repeat information several times.  Chapter 4, 7, 10 & 11 all mention Joe Hill (the socialist activist executed in Utah in 1915 on largely circumstantial evidence), repeating the same information each time.  Many figures pop up in several chapters, often with no indication of where their appearance in this newspaper or at that social event fits in with the overall chronology of the movement or their involvement in it.

I can understand the authors’ desire to focus on aspects of the movement rather than overall chronology, but it makes for very frustrating (and at times repetitive) reading, not being sure where any particular even fits in with the overall picture.  The best two chapters in the book, in my opinion, deal with the relationship between socialism and the Mormon church in Utah, and these chapters immensely benefit from a chronological approach.

2.    In addition to the repetitiveness of the narrative, the book suffers from a repetitiveness of rhetoric.  The authors’ claim in chapter 3 that Utah socialists “did not simply repeat what Socialists elsewhere were saying” but instead “emphasized specific ideas” aimed at “particular conditions and issues in Utah.”  Almost nothing they quote proves this claim (the one exception might be rhetoric aimed at the Mormon church, though it too often sounds like warmed over rhetoric from Christian socialism).  Instead, every chapter winds up sound rather much like the last previous chapter in terms of rhetoric.  The newspaper condemned capitalism and praised socialism in the same way the lecturers did.  Every chapter quotes many socialist thinkers, and they all make the same points.  By the fourth chapter, I was already tired of hearing yet another general statement of the evils of capital and the benefits of collective ownership by the workers.

3.    There’s no real sense the socialists themselves were to blame for what happened to them.  While I don’t want to “blame the victim” and this study details some pretty horrendous violations of constitutional rights that even the most die-hard conservative should be appalled at – the study also details how socialists often won office and even controlled many local governments at the time.  Yet time and again, it seemed as though the socialists were perpetually the victims, never responsible for any of their problems, despite their constant tendency to fracture into smaller and smaller parties over minor disputes.  While I believe this study tries hard to be fair, I felt it could have benefited from more coverage of the socialist’s own failings.

Overall, however, I must stress this is an excellent, well researched study that is well worth any reader’s time, regardless of your political affiliation.  Had I world enough and time, I would write a several page long-form book review of this study, and it would be 75% praise.  My critiques above are outweighed by the book’s many virtues, and my hope is that whoever does the next study on radical movements in Utah takes my advice into consideration and writes something that builds on this study’s strengths while avoiding the few weaknesses.

4 thoughts on “Book Review: A History of Utah Radicalism”