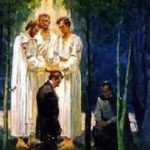 Now that women have had a day, its time to explore how patriarchy is not always what its cracked up to be. The responsibility can sometimes put pressures on that exhausts even the strongest individual. All eyes are focused on the carefully choreographed lives set in stone by the time men enter primary.

Yes, there are obstacles that women have to face in the Church as Meg and SilverRain mentioned in the previous post about Mormon women. Finding out how we fit in the Kingdom of God is part of the challenge for every Latter-day Saint. The goal of perfection is hard and confusing for everyone. Mix in the political expectations and its no wonder lives seem to fall apart. The two worlds really can’t co-exist without fissures and hurt feelings. The words of Jesus are still applicable today, no one, “can serve two masters: for either he will hate the one, and love the other; or else he will hold to the one, and despise the other. Ye cannot serve God and mammon” (Matt. 6:24, read the whole chapter). No doubt conservatives are less conflicted than progressives because the former already supports structure and what some negatively define as the status quo. That doesn’t mean shaking things up for them is wrong, because complacency can be spiritually dangerous. On the other hand, its often no use trying to convince the latter that a quiet life is a good one; they are always on the move to somewhere for something no matter if the road leads to destruction.

There is no getting past the idea that the argument of women’s’ role in the Church is political. The unity of Zion transforms into the battle of the sexes. The glass ceiling and not the Kingdom of God a destination. That doesn’t make women’s issues any less real, but the focus put on the subject can harm men. They become the object of scorn, jealousy, and conspiracy. They start walking barefoot on the broken glass rather than boldly doing their Priesthood duty. Should they step up more in helping mothers and children in family life? Yes. Should they be more accommodating and listen to the voice of all women more? Yes, of course. Should they support and encourage women into more spiritual participation and growth? Not doing that is irresponsible. Following the example of Jesus the way he interacts and takes women seriously as part of the fold is a more than commendable, its necessary.

Heaping guilt on top of an already busy life doesn’t foster better leaders. The grass is always greener . . . as the saying goes. Mormon Men’s lives are not a cakewalk full of privileges, even if rewarding. Most active men are honestly trying to be good stewards. They can certainly improve. We all can and must.

The article in the New York Times discussed more women going on missions as if a new phenomenon. The first female missionaries Inez Knight and Lucy Jane (Jennie) Brimhall were set apart April 1898 in Provo, UT. The influx of even more women going out into the “field” will more than likely not substantially change things for women in general.

The responsibility for men to go on missions has not changed. It is considered a Priesthood duty if not requirement. Boys are encouraged to go starting with Primary. Actually, encourage is the wrong word. They are expected to go. Pres. Monson said, as an example:

“Young men, I admonish you to prepare for service as a missionary. Keep yourselves clean and pure and worthy to represent the Lord. Maintain your health and strength. Study the scriptures. … To you young sisters: while you do not have the same priesthood responsibility as do the young men to serve as full-time missionaries, you also make a valuable contribution as missionaries, and we welcome your service.”
“As We Meet Together Again,” Ensign, November 2010, 4–6.

If a man doesn’t go, then they are scrutinized, true or false, about righteousness. A lot of good leaders, like Prophet Hunter, never went on missions. That doesn’t deflate a certain amount of doubt as to a man’s character. Luckily, the older one gets the less not having served is seen as a predicament. Converts of an older age are excused from the stigma of never having gone.

By the time a boy becomes 14, they are given the Priesthood with responsibilities great and small. Modern definitions of teenagers can turn them into hypocrites for some older ones. Outside peer pressure sends them drinking and partying on Friday or Saturday night, then passing the Sacrament on Sundays. There are a lot of really good teenage boys, but plenty of bad apples. The Bishop and Young Men leaders have a tough job to do countering High School influences. To say boys are not taught to control themselves when confronting pretty girls, for instance, is ignorance of every Sunday School and Priesthood class. The impression can sometimes be they are barely able to control themselves if not careful. They are drilled with teachings about following the Commandments to be worthy of passing the Sacrament, administering to the sick, and of course getting ready for missions. What they decide to do outside of Church settings really is a choice.

Boy Scouts falls into this section. Feelings about this mixture of Priesthood with a secular organization has been explored before. It is more fun and camping than spiritual development, with even the little of that criticised by those who want to seperate Church from uniform. Besides, not all boys enjoy the outdoors. No matter the view, it became synonymous with Priesthood responsibility to participate from the start. Getting an Eagle represents becoming a man.

After returning from a mission things don’t become easier. In fact, they become much harder. Men are expected to get married, start a family, get an education, and then have a full time income job that supports the whole family. That doesn’t even cover all the Church related expectations.

In Church there are really two types of callings. The first is whatever position the man is called to accept. This can be a “lowly” quorum secretary up to Bishop and Stake President. Despite the view that these are cosy positions of power, the reality is of a heavy time consuming burden with no pay and little praise. Secondarily is Home Teaching assignments that more often than not aren’t getting done. A few already overworked Priesthood leaders often pick up the slack. Then there is giving Priesthood blessings to just about anyone who asks. With a drop of the hat a man is required to stop doing whatever and go over to administer to the sick, scared, and lonely. Cheerfully they will do this from the heart, but it is one more expectation without widespread recognition.

Depending on the Priesthood calling a man receives, Sundays can be more busy than a typical work day. Bishops and Stake Presidents have it the worst because the job can go from early morning to late evening. Some bring or have a family member deliver lunch.

At the start of the day a leader and small group of advisors meet to discuss the needs of the Church and individual members. Soon a cadre of other Priesthood and auxiliary leaders arrive to find solutions brought up by concerns during the first meeting. Then Church starts where the Bishopric presides over song selections, ward speakers, and other business planned earlier in the week. Three hours later another meeting takes place at the secretary office going over financial and statistical records. Personal meetings discussing spiritual progress and repentance last into the early evening. Another meeting, presumed right before or after dinner, gathers willing Priesthood holders to discuss how to improve ward numbers with a few sports analogies to mix it up. For once it would be nice to have a meeting devoted to improving personal scripture reading, pondering, and praying.

Considering all the meetings that go on at any time on the weekend, its a wonder that a group of women want to “bust into” the Priesthood session of General Conference. What is it they expect to hear? Its more of the same call to repentance and respect for family like the other Conference sessions, only geared toward men and boys with a few more sports analogies. Unlike the women’s session, there is hardly any specific talks of how special they are. I can understand why feminists might be a little confused when women’s conference has men speakers. That is if they don’t understand or respect the current patriarchal makeup of the Church hierarchy; developed by revelation to Joseph Smith with visits from John the Baptist and Peter, James, and John.

Apparently, a poll taken about women getting the Priesthood shows more men than women want that to happen. One theory is that men agree to this as a kind of sideways statement of how hard Priesthood responsibility can be. They are tired and don’t get more than grudging respect. The world wants them to feel guilty about something and a few women inside the Church are helping along. That said, behind every good Priesthood leader is a woman who loves and supports them as a person.

For those who are concerned women are the ones not getting enough respect, how can women gain more influence in the Church when they don’t hold prestigious positions? I like what Meg said about women who really want more spiritual participation need to be proactive with what they already have been given. Faith, prayer, revelation, and worshiping God with service to others has no gender or position. Get rid of the idea the Church is equivalent to a business because its purpose is completely different no matter what the skeptics say. Screaming from the rooftop might be powerful, but God rewards those who give alms in secret. That isn’t to be interpreted as a statement about women staying quiet. Its about women becoming active in the Lord’s way with His priorities. Men, who are busy enough as it is if they are doing their duties, will see the women’s good works and praise God. To be fair, men need to speak up more when we do see those works; and they are plenty. The Gospel of humility, forgiveness, and repentance is for everyone.

15 thoughts on “Being a Mormon Man”