The president tried to run some victory laps on Friday after the official unemployment rate fell to 8.1 percent. This is a bit like the guy who came in last claiming he won. Let’s take a look at the real numbers. 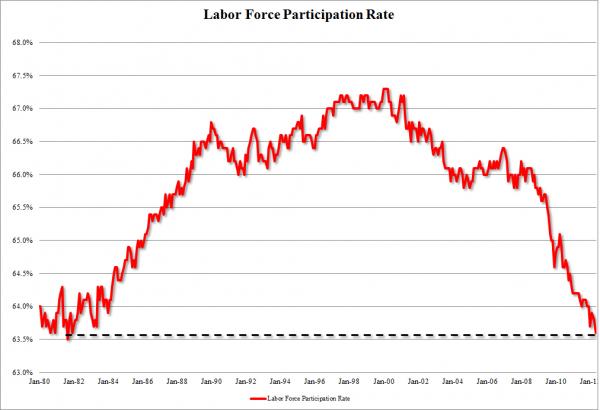 Just to drive home the point, here is a graph showing the number of people who have abandoned the workforce altogether. 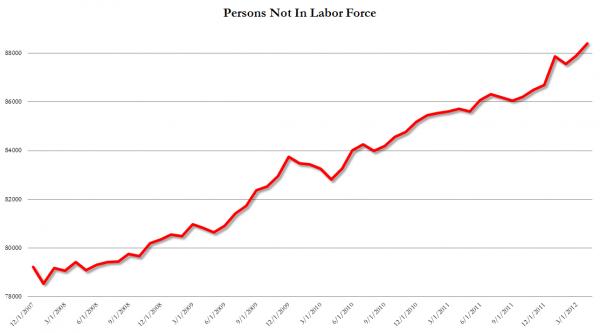 What are these people doing? They are staying on unemployment, they are living off of savings or they are a husband and/or wife who would normally work and cannot find a job. This is what happens during a depression.

Speaking of depression, what is even worse is that a record number of people are filing for disability insurance, whether they need it or not. In a flush economy, these people would find jobs, but because the economy is falling to pieces, they have given up and turned to the government.

The typical retort is: Obama inherited a bad economy. But our president adopted policies that made a weak economy even worse. Take a look at the Obama recovery compared to all other recent recoveries. 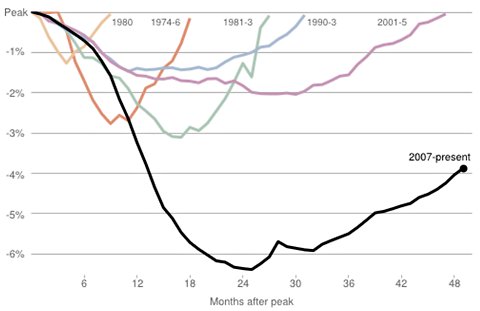 Bottom line: Obamanomics do not work. The recession is deep and not recovering. You can best compare the Obama stimulus plan to the last two lost decades in Japan, where there has been trillions of stimulus spending with nothing to show for it. What does work? Massive cuts in government spending. After World War I and World II, we cut federal government spending in half. This freed up capital for the private sector, which invested it and created jobs. Take a look at this chart, which shows government spending as a percentage of GDP: 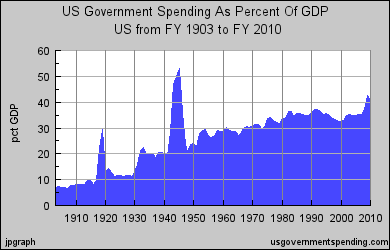 After World War I, we cut government spending, and we had a massive economic boom. After World War II, we did the same thing, and we had a boom that lasted more than two decades. I would even point out for Clinton Democrats out there, that spending also went down in the late 1990s, and the economy boomed. Clinton rightly declared that the era of big government is over, but unfortunately many people didn’t get the message. The solution is clear: do the exact opposite of what the Obama administration wants to do, ie, cut spending, and the economy will begin to heal.