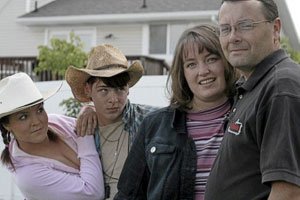 Nicholeen, your episode of “World’s Strictest Parents” has just aired here in Australia. I watch it because I like to see how different parents handle difficult kids. Of all the episodes I’ve watched I thought you and Spencer, hands down, handled the situation beautifully. How on earth you two managed to stay so calm I don’t know but it was riveting to watch.

A lot of the episodes don’t feature the host family’s children (they are kept off screen) and what a revelation they were. When Hannah was in the midst of boasting of her conquests with boys at 12, I was very moved by your daughter’s gentle but firm assertions that such actions were not needed. I wish I had that discipline and quiet confidence at her age. Alas, that took me a good 20 years to learn.

Thank you for reminding me of what truly matters (and what we often allow to go missing in our lives). Image is a sandcastle. The rock is family and relationships.

Your episode truly made an impact.

Sorcia,
Thank you so much for your kind comments.  Making The World’s Strictest Parents Utah episode was a great experience! At first we didn’t want to do the show when they asked us, but then we were really impressed that our family was somehow “meant” to do the show.  At that point we just acted even though we thought we might be crazy for doing so.  The show was Masterfully edited, and kept real and honest.  We were happy about that.  There was only one quote by the narrator that I felt was not true.  Other than that, that was our life that week.

I only wish the viewers could have seen the other 179 hours of footage.  They would have seen so many inspiring, life-changing moments.  I will never forget when James asked me to teach him how to pray.  His first prayer was so special, simple, and powerful.  It was also a key moment for him because it helped him know that if he sincerely asked for help, he would get it.  He came up to me and said, “Nicholeen my prayer really worked.  I only thought about smoking one time this whole day!”

About being calm.  I made a rule for myself years ago.  I will not talk to other people unless it is done calmly.  Aggressive communication never solves problems, it usually just makes more.  Since we made that commitment and our children know about that commitment they also know that in order to be heard by us, they need to get calm too.

Calm doesn’t happen over night, it is a gradual process of much practicing, but when achieved it is the crowning jewel of self-government.

Your last statement “Thank you for reminding me of what truly matters (and what we often allow to go missing in our lives). Image is a sandcastle. The rock is family and relationships.”  really touched me.  You are right.  That is the theme in our home and was what we wanted the theme of the show to be if we were doing it.  I am so happy you found it.  🙂  My family is not perfect, but we have perfect intentions.  We know what we want and talk about how we are doing on what we want and deliberately practice skills which help us achieve our vision.  These deliberate actions are really the only thing that separates us from anyone else.  Other than that the world just saw a regular LDS loving family.

Thank you again for taking the time to write such a great review.