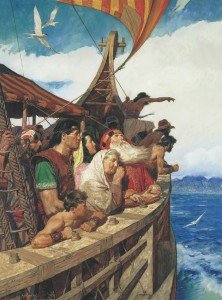 Recently my Stake President challenged us to read the Book of Mormon this summer (or this year). I’m always up for another foray into the lovely pages, so I decided to start listening during my daily bus commute.

I had also recently helped my daughter finish documenting her completion of the Personal Progress requirements. Therefore I was reminded of the Lenten Personal Progress program I developed, which among other things tells you how you can complete the Book of Mormon in 46 days.

11 And [Lehi] beheld that [the plates of brass] did contain the five books of Moses, which gave an account of the creation of the world, and also of Adam and Eve, who were our first parents…

17 And now when my father saw all these things, he was filled with the Spirit, and began to prophesy concerning his seed—

18 That these plates of brass should go forth unto all nations, kindreds, tongues, and people who were of his seed.

19 Wherefore, he said that these plates of brass should never perish; neither should they be dimmed any more by time. And he prophesied many things concerning his seed.

Recall that Manasseh (hiss boo) had reigned for decades in idolatrous and infanticidal polytheism within recent memory when Lehi fled Jerusalem. So the monotheistic Judeo-Christian creation story where man is created by God would have been precious indeed.

An account of the creation of the world, and also of Adam and Eve…

We know that the original 116 pages of the Book of Mormon were lost. Might these pages have contained an account of creation and the Abrahamic covenant that, though brief, was paradigm altering for Joseph Smith? I’ve sent a query to Don Bradley, who has made an extensive study of the likely contents of the 116 pages.

But here’s what I do know.

Book of Moses. In 1830 Joseph turns to the Bible, to create an expanded version of the text therein. This is very shortly after Joseph has published the Book of Mormon and organized the Church.

Joseph’s alterations to the creation story are significant – so significant that we have canonized that particular portion of Joseph’s inspired Biblical revision as the Book of Moses, now in the Pearl of Great Price.

Remember the words Joseph was given after losing the 116 plates regarding the Book of Mormon: even so shall the knowledge of a Savior come unto my people… 1

But what if all this adulation of our Lord and Savior was in a book that initially told us of how Jesus had volunteered to be the Savior of mankind, to save us all from death and sin at the very beginning, when Adam and Eve transgressed? Would it not make sense that prominent recollection of the salvation of the seed of Adam and Eve would create the Christ-worship we see throughout the Book of Mormon?

With respect to the lost 116 pages, Joseph was commanded to not attempt to retranslate that initial portion of the Book of Mormon, because the people who had taken the pages had altered the words. Joseph was told “if you should bring forth the same words they will say that you have lied and that you have pretended to translate, but that you have contradicted yourself.” 2

However an inspired alteration of the Bible creation story would not be expressly a retranslation of what might have been the Adam and Eve and Christ story in the Book of Mormon, so differences between that and the altered pages would not be so entirely damning.

Even so, the Book of Moses creation account ends with these words: See thou show them unto no man, until I command you, except to them that believe… 3

Book of Abraham. Time passes and Joseph is dealing with the real meaning of biblical plural marriage 4 and a multi-tiered heaven 5

Then in July 1835 Egyptian mummies and associated papyri arrive in Joseph’s Kirtland. The town is bursting with faithful and a massive temple is rising in the center of town symbolizing the new faith.

Joseph again begins to translate, though I’m not sure if there are documents confirming that this Egyptian-inspired translation attempt used the seer stones as has been documented for the Book of Mormon plates.

Whatever the mechanism, this becomes a new opportunity to explore the creation narrative that may have been lost with the 116 pages. The papyri-facilitated creation account now includes mention of spiritual life before mortal birth, a concept almost entirely absent from the King James version of the Bible familiar to Joseph. But this could have been a concept contained (if briefly) in the lost 116 pages.

The concept that all living mortals chose Christ before this life and that God yearns to have all who will return is explicitly explored in the papyri creation translation. This is strikingly correlated with the intense yearning of so many in the Book of Mormon to redeem all the children of their father, Lehi, despite suffering and persecution and all the other ills of differentiated and lethally competing socio-political groups.

[I could swear I remember some warning in the Book of Abraham about keeping these things sacred, but I’m not seeing it today – kudos if anyone can remind me which verse I may be (mis)remembering…]

Temple Endowment. Joseph Smith administered the first endowments in May 1842.

Members of the LDS Church don’t talk much about what happens in the temple. As is often said, we regard these things as sacred. But we know the ceremonies of the temple involve preparation to become servants of God. The instructions given and covenants made in the temple are towards this end of preparing individuals for eternal life.

As discussed in the Bible and argued by Jesus in John 10: 34-38, the Jewish law taught that mortals could become gods. 6

The temple would be to allow individuals to enter into those covenants and perform those ordinances that prepare them to becomes the gods the Bible speaks of, holy beings who serve God, the Father of all. These individuals would, if faithful, reign and minister in God’s heaven.

The instructions form a basis for understanding God’s work and salvation: our existence before mortality, the fall of Adam and Eve, the purpose of our mortal lives, the reality of resurrection after this life, and the possibility of returning to live with God in his kingdom. 7

Thus the third known time Joseph Smith revisits the story of creation and Adam and Eve is in the temple endowment. Here again we are cautioned to withold these sacred things from the world.

Regarding the reverent silence we maintain regarding the temple, it is clearly in keeping with the caution mentioned in the Book of Moses. Therefore it is also clearly similar to the caution to avoid republishing an account that could be compared to an altered variant of the lost 116 pages.

Joseph had huge headaches in 1842. There were sexual predators pressuring women to yield to illicit intercourse. The heretical doctrine that illicit sex was permissible had been promoted to (and in some cases by) unknown numbers of the faithful. This included Joseph’s own brothers and far too many high-placed Church leaders. And then there was the sickening number of women coming forward with tales of being seduced, including seductions resulting in pregnancy. So at the time the endowment was introduced, there was a new security concern that made the possible adulteration of the 116 pages pale in comparison.

The Fulness of the Gospel

Time and again it is stated that the Book of Mormon contains the fulness of the gospel, that it will bring all to an awareness of the Christ, that a man could get closer to God by studying its pages than by reading any other book.

Yet Mormon belief includes all manner of additional information regarding kingdoms of glory, a pre-mortal existence, a Lucifer who was once spirit peer to Christ, and almost obsessively the creation and fall of Adam and Eve, precipitating Christ’s explicit promise to be our Savior.

What if the 116 lost pages had included the creation and Adam/Eve narrative in more detail than the brief mention in 1 Nephi 5? What if the seeds of the Pearl of Great Price and the temple endowment were originally in the Book of Mormon as its editors had intended it to be?

It’s a “what if” that delights me until such time as I have reason to be confident it is incorrect.