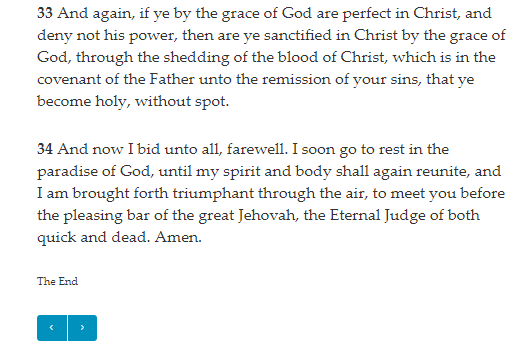 A couple of days ago I finished reading the Book of Mormon, which I had started in October based on President Nelson’s challenge.

About a year ago I recall opining that the Book of Mormon peoples had a more complete version of the creation narrative, a narrative which was neutered by the Deuteronomists and then corrupted during the Babylonian captivity. At that time I was wondering if the fullness of that creation narrative, which we see in accounts canonized in the Pearl of Great Price and the temple endowment, could have been contained in the initial manuscript pages that have been lost.

During this reading, however, I realized the fullness of the creation narrative can be found scattered throughout the extant Book of Mormon, included as asides during doctrinal discussions about the purpose of this life and the need for a Redeemer.

According to some estimates, roughly 60 billion humans have lived on this earth, including the ~7 billion that are alive at the moment.

If God’s plan includes offering redemption to all His children, how are the bulk of the 60 billion to be saved? As many cultures are lost to memory, we cannot do the work entirely by means of searching out the records. There must needs be a way to learn the identities of those memory has forgotten.

Reviewing the ministry of Jesus Christ in America, I was struck by the mention of the ministry the three disciples of Christ would perform in this world:

Therefore, great and marvelous works shall be wrought by them, before the great and coming day when all people must surely stand before the judgment-seat of Christ;

Yea even among the Gentiles shall there be a great and marvelous work wrought by them, before that judgment day. (3 Nephi 28: 31-32)

One of the delights in reading the Book of Mormon in company with millions of others was the synergy of insights. One sister explored for us what it meant that Laban had command of his fifty, yea even his ten thousand. Laban, she argued, was clearly a key military leader. Had he not been rendered unable to report, the armies of Jerusalem would have scoured the wilderness and eradicated Lehi and his family. On the other hand, the recent predations of Babylon and Assyria in the early reign of Zedekiah meant that the quality of remaining leadership in Jerusalem was sketchy.

Another sister put forward the assertion that Abinadi was likely the brother (or at least close kin) to Amaleki, the final writer in the small plates of Nephi. Amaleki’s father was Abinadom, a name with strong similarity to Abinadi. Abinadi appears to have been an age peer to Amaleki. Of interest, Abish appears to have been a generation after Abinadi. This sister sent me a story of Amaleki and Abinadi as brothers, the ending revealing her conjectured link between Abinadi and Abish.

Certainly the corruptions in Nauvoo from 1841 through 1844 resemble the secret combinations described in the Book of Mormon.

Of course “secret combinations” are rife in our day. But I found it illuminating that the Book of Mormon would have provided Joseph and his peers a context for understanding the persecutions of their day.

In light of the recent changes to focus on ministry and step back from calling ourselves by the name of a man (wonderful though Mormon was), it is interesting to see the language the Book of Mormon uses for believers in Christ and the work of succoring those around us.

Glancing through the Book of Mormon, the term “shepherd” refers exclusively to the Savior (though there are times when shepherd is mentioned as metaphor implying Christ less directly). Thus a reading of the Book of Mormon would not support use of “shepherd” or “shepherding” for us to use in our work with one another.

Ministry, on the other hand, is continually mentioned, as in “the work of the ministry.”

I’d be interested in hearing more of the insights you have had, reading through the Book of Mormon this fall.

1 thought on “Reflections on Reading the Book of Mormon”