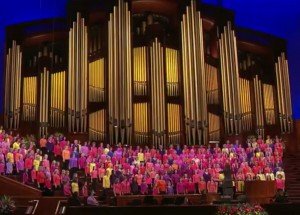 I was intrigued to see what impact I might observe regarding the announced symbolism of the color purple. The choir was clad in a now-typical uniform of modest shirts in a wide variety of colors. It appears the palette of acceptable colors were cool spring colors, including yellows, pinks, reds, and purples. The overall impact is like looking at an array of azalea bushes. This is such a striking image that I wonder whether the color scheme was set before purple was announced as a color with a message.

The initial choir selections were “Hark, All Ye Nations!” and a new composition, “Daughters of our Heavenly Father”. The choir contained women from stakes all over the Wasatch Front, including girls in Primary, Young Women, Relief Society sisters 1 The age range was from as young as 8 years old to at least one lady who was 80 years old. The continual choir message was of a unified, inclusive sisterhood.

Sister Wixom, General Primary President, was the initial speaker. She focused on how we look to one another for support and assistance–both how the young help those who are older with things like Facebook and simple enthusiasm and love. Those who are older provide those younger with guidance and support. My favorite moment was when she asked the girls from 8-11 years old to stand and sing “Teach Me to Walk in the Light of His Love”. All the older individuals then sang the second verse, “Come Little Child and Together We’ll Learn”. This singing was spontaneous, simply based on a few notes played on the organ, which were quickly recognized by the girls in the audience who were standing.

Sister Wixom’s comments were followed by a video, showing women from several countries, who then joined in singing “I am a Child of God” in their respective native languages. It was an aural and visual celebration of the cherished nature of God’s daughters around the world. The final verse was sung in English by the choir–

I am a child of God.
Rich blessings are in store;
If I but learn to do his will,
I’ll live with him once more.

Lead me, guide me, walk beside me,
Help me find the way.
Teach me all that I must do
To live with him someday.

Sister Bonnie L. Oscarson, General President of the Young Women’s Organization, was next to speak. She focused her remarks on how we need to build one another up and support one another, not tearing ourselves or others down. The main focus in her talk for me was her recounting of the story of Mary and Elizabeth, how the miraculously pregnant young woman and the miraculously pregnant old woman, kindred sisters, relied on one another for the three months they spent together before the births of their special children. For me, as one-time 17-year-old Relief Society president and mother of girls who have and will make the transition from Young Women’s to Relief Society, it was clear to me that Sister Oscarson was laying out the pattern for how we can all work together to support one another at all times, including the times when we transition from one set of peers (e.g., Young Women) to another set of peers (e.g., Relief Society).

Sister Oscarson’s comments were followed by another video. The music was pleasant, but the intent was to show how women maturing through life. At multiple points in the video, we see the girls/women sitting before their bishop, signing their temple recommend. The video conveys a full spectrum of service in building God’s kingdom, including family history work and nurturing family. At the end of the video, the woman stands at her husband’s grave, again alone, but surrounded by the beloved individuals, young and old, male and female, that her life’s walk has brought into her sphere of influence.

Sister Linda K. Burton, General President of the Relief Society, delivered the final address from a woman leader at the March 2014 Women’s Conference. She talked of one woman who had only one hand, but still was able to serve. I loved Sister Burton’s coverage of the story where The Lord said, “If ye are not perfect, ye are not mine.” As I have been taught over the years, so Sister Burton taught all the women of the Church: perfect, in this scripture, is a Greek word meaning “complete.” In story after story as Sister Burton continued, she showed how we become the hands of our God, in helping and lifting one another, by committing to stay true to our covenants, by coming forward as others have, saying “Here am I. Send me.” If we are not complete, Sister Burton urged us to reach out in service to those around us, as the Savior did.

After another lovely rendition by the choir (a medley of “Lord, I Would Follow Thee” and “Love One Another”) President Eyring addressed the Women’s Conference. I enjoy President Eyring as a speaker, and when I listened to his remarks later in isolation, his address was fine. But after the powerful, inclusive, empowering addresses by Sisters Wixom, Oscarson, and Burton, President Eyring’s remarks in praise and encouragement of women felt like a denouement and not a climax. President Eyring talked about his wonderful mother, and how she had raised him and contributed so much to his later life of service. President Eyring told the story of Eve, and how important she was, that she was created to be an help meet for Adam. If President Eyring had intentionally set himself up as a foil to showcase the powerful nature of the ladies who had address the conference earlier, he would have been somewhat hard-pressed to do a better job while still retaining his apostolic mantle.

The meeting closed as the choir sang “Let Us All Press On.”

I noted that none of the speakers wore purple. Yet the ladies, at least, were quite inclusive in their comments (President Eyring did not speak out in any pointed way against the kind of people who might have worn purple as a message). This reaching out in love to all is something that women tend to do and do well.

If you’d like to watch the Spring 2014 General Women’s Conference, it is now available at lds.org in video, audio, and text formats (in multiple languages).