Over the Christmas break, the Bensons in true geek fashion, undertook a marathon of watching the entire Star Wars movies, including the cartoons. We did this in part,  because Tex, Piano Man, and Flash are big Star Wars Fans; also as a fun way to remember Mike, who was a Star Wars geek. Hong Mei loves to watch movies  or TV and she  identifies with either the villain or the dominant male hero.  Jie Jie and I hoped she would instead want to be  Princess Leia or Padme Amidala. Instead, in typical Hong Mei fashion, she became a big fan of  Darth Vader. 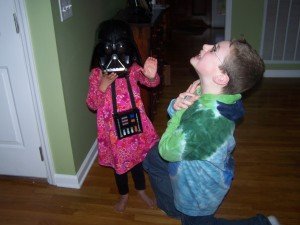 Hong Mei as Darth Vader and Flash as Unfortunate Rebel

At one point engrossed in the power of Darth Vader,

she asked me, “When do I get the force?”

“I guess when women get the Priesthood”

“Good, cause I want to do this ( demonstrates with her hand) to Flash”.

And that  is why, dear reader, women do not have the Priesthood.

14 thoughts on “Why Women Do Not Have the Priesthood”