Before we go any  further, dear reader, you have homework to do. If you wish to participate in this conversation it  is necessary to read the required reading the synopsis of the Book of Mormon Musical. I apologize for the smut you will encounter, but hey, the Pandora Box has been opened, and not by me. 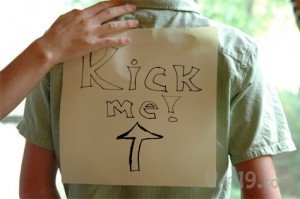 Remember high school?  The most terrifying  aspect of the high school experience were the Bullies.  Those of us who were vulnerable, did our best to blend in and not attract attention. We  cringed nervously in the presence of a Bully,  hoping we weren’t next.

One kind of Bullying was more pervasive and difficult for the adults to identify and punish.  These demonic kings/queens of high school dealt a subtler form of abuse disguised as “comedy” which didn’t leave bruises as evidence.  They were the ultimate in the Cool Kids Club. Everyone  was afraid of the them and sought to appease them to protect their own precarious social position.

“Hey, I was just “ribbing”, we are friends, just having a little fun!”

The Cool Kid Bully would reply to the Vice Principal after receiving a scolding for  putting a “kick me” sign on the back of some unfortunate unpopular kid. Once you were the unpopular kid  who was put into this situation you had three choices:

a) To be the Not-So-Smart kid who would put up a feeble protest by fighting back, inviting laughter from the crowd and more abuse from the bully

b) To be the dignified kid who walked away ignoring the boorish behavior, in doing so, minimized the bully’s fun

c) Or to be a poor soul, who suffered from such low self esteem they were grateful for the attention. After all, negative attention from the “cool kids” was better than none at all, right?

They would defend the bully to the Vice Principal, ” Oh yeah, I don’t mind, we were playing! We are friends!”

They were pathetic in hopes their pandering would somehow earn them a place in the Cool Kids Club.

Sometimes in life  we replay the awkwardness of high school, well into what should be our adult years. As members of the LDS church in North America, perhaps we suffer from a little teenage low self-image. Apparently we are willing to sacrifice our dignity to pander to the “cool kids” of Hollywood; who are really just grown up versions of those comedic high school bullies.  We LDS have found ourselves, for the moment,  the unfortunate victims of  the ultimate Cool Kids Club, the creators of South Park. If you did your homework, dear reader, you now know about the production of  The Book of Mormon Musical. Parker, Lopez and Stone are mocking what we consider to be sacred and precious. I don’t blame them, per se, they are the devil’s minions and do not know entirely what they are doing.  We cannot control the actions of others, so we should preserve our dignity and just walk away.

As always, the key to solving our difficulties can be found in the scriptures.  Let us turn to the Book of Mormon for guidelines in what to do in this situation. In 1Nephi we read about the Vision of the Tree of Life.

In chapter 8 Nephi tells us of a tree:

9 And it came to pass after I had prayed unto the Lord I beheld a large and spacious field.

10 And it came to pass that I beheld a tree, whose fruit was desirable to make one happy.

Nephi also tells us the ways and means to obtaining this desirable fruit:

19 And I beheld a rod of iron, and it extended along the bank of the river, and led to the tree by which I stood.

20 And I also beheld a strait and narrow path, which came along by the rod of iron, even to the tree by which I stood; and it also led by the head of the fountain, unto a large and spacious field, as if it had been a world.

21 And I saw numberless concourses of people, many of whom were pressing forward, that they might obtain the path which led unto the tree by which I stood.

22 And it came to pass that they did come forth, and commence in the path which led to the tree.

Where there is good; there is also opposition, in this case  of a “Great and spacious building”:
26 And I also cast my eyes round about, and beheld, on the other side of the river of water, a great and spacious building; and it stood as it were in the air, high above the earth.
27 And it was filled with people, both old and young, both male and female; and their manner of dress was exceedingly fine; and they were in the attitude of  mocking and pointing their fingers towards those who had come at and were partaking of the fruit.

This mocking had an effect on the behavior  of the people in the vision:

25 And after they had partaken of the fruit of the tree they did cast their eyes about as if they were ashamed.

28 And after they had tasted of the fruit they were ashamed, because of those that were scoffing at them; and they fell away into forbidden paths and were lost.

34 These are the words of my father: For as many as heeded them, had fallen away.

Ok, dear  reader, perhaps you are wondering why I am not following the advise of Lehi and Nephi and “heeding them not”?  It  is because it came as a great shock  to me to learn that the church bought advertising space in the Los Angeles production playbill of the Book of Mormon Musical.  From an article in the Deseret News:

“Patrons of the musical aren’t likely to leave the theater with a better understanding of the Book of Mormon,” LDS Church spokesman Michael Purdy said Thursday afternoon. “Our message in the playbill invites the audience to seek a more complete perspective on the book, its Christ-centered message and its place in Mormon belief.”

Brother Purdy, and rest of the Public Relations Arm of the Church, people who go to see this musical are not interested in the Book of Mormon as scripture, but instead, are mocking it. They are the same as the multitudes who entered in the great a spacious building to mock those who partook of the fruit.

Christ told his followers, “Give not that which is holy unto the dogs, neither cast ye your pearls before swine, lest they trample them under their feet, and turn again and rend you.” Matthew 7:63 Nephi 14:6Doctrine and Covenants 41:6

In other words, We should take no heed to what the mangiest dog thinks of us.

It is naïve to assume that the audience of the Book of Mormon Musical production needs that ad to be reminded that there is a real Book of Mormon out there. I dare to guess the patrons of this musical have access to the Internet, and have probably stayed in a Marriott Hotel, where each room has it’s own complimentary Book of Mormon. A copy of the Book of Mormon is easy enough to acquire.  I find it laughable that anyone would presume the spirit would be present in such an atmosphere, to impress anyone to learn more about the Restored Gospel of Jesus Christ.

“The playbill ad is another example of the LDS Church’s savvy response to ‘The Book of Mormon’ musical,” said award-winning public relations guru Chris Thomas, co-owner of Intrepid Communications in Salt Lake City. “Instead of protesting the musical, which is something that many would do, especially religious organizations, they made a bold and deliberate decision to embrace the situation.

Mr.  Thomas, I suggest the correct course of action to take is not:  a) protest  or b) embrace, but rather, the correct answer is;  c) ignore,  as is counseled in the scriptures “heed them not”.  Your words remind me of the poor pathetic victim who chose to “embrace” his tormentor, rather than taking the dignified way out and Heed them not.

They have taken something that could have been detrimental to the church’s missionary efforts and made it positive.”  Chris Thomas

Once again, Mr Thomas,  patrons of this production are not interested in the Book of Mormon as scripture. Instead it is  the grossest example of mocking, using vulgar homosexual humor at the expense of the missionary experience. What is detrimental to the LDS church’s missionary efforts is, to give this garbage give any kind of  validation, rather than as you (Mr. Thomas) have suggested that we “embrace the situation”;  instead we should do as Lehi and Nephi have admonished us to do,  “Heed them not”!

“The official church response was something along the lines of, ‘The Book of Mormon’ the musical might entertain you for a night, but the Book of Mormon — the book as scripture — will change your life through Jesus,” Stone said. “Which we actually completely agree with.  That’s a cool, American response to a ribbing.”

Mr. Stone, For me and other faithful believers, the Book of Mormon is sacred scripture. It is as precious to me as the Bible and my reverence for it is similar to the devotion the Jews have for the Torah.  The Book of Mormon Musical is blasphemy against G-d and Christ.  You have depicted our Father in  Heaven and our Savior in the vulgarism of terms. Mr Stone, it is not “cool” nor “American” to blasphemy the Divine.

42 thoughts on “The Book of Mormon Musical: To Embrace or Heed It Not”