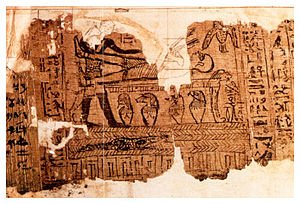 Probably all of you have already read Richard Bushman’s Joseph Smith: Rough Stone Rolling, so this isn’t anything new to you. But I wanted to replicate his discussion and explanation for the Book of Abraham in its entirety here. If I merely summarize, I’ll run the risk of interpreting and I want to avoid that risk. Later on I’ll use this as the basis for future discussion that I can refer back to. So here it is: Richard Bushman’s take on the Joseph Smith Papyri and the Book of Abraham that it inspired.

The Abraham texts gave Joseph another chance to let his followers try translating. While working on the Book of Mormon in 1829, Joseph invited Oliver Cowdery to translate: he tried and failed. Now with the Egyptian papyri before them, Joseph again let the men with the greatest interest in such undertakings – Cowdery, William W. Phelps, Warren Parrish, and Fredrick G. Williams – attempt translations. …

Through the fall of 1835, the little group made various attempts. … They seem to have copied lines of Egyptian from the papyrus and worked out stories to go with the text. Or they wrote down an Egyptian character and attempted various renditions. Joseph apparently had translated the first two chapters of Abraham …and the would-be translators matched up hieroglyphs with some of his English sentences. [Their method seemed to follow the revelation given to] Cowdery after he failed to translate the gold plates: You must study it out in your mind; then you must ask me if it be right, and if it is right, I will cause that your bosom shall burn within you.” One can imagine these men staring at the characters, jotting down ideas that occurred to them, hoping for a burning confirmation. They tried one approach after another. Joseph probably threw in ideas of his own. Eventually they pulled their work together into a collection they called “Grammar & Alphabet of the Egyptian Language,”….

Of all the men working on the papyri, only Joseph produced a coherent text. What was going on as he translated? For many years, Mormons assumed that he sat down with the scrolls, looked at each Egyptian word, and by inspiration understood its meaning in English. He must have been reading from a text, so Mormons thought, much as a conventional translator would do, except the words came by revelation rather than out of his own learning. In 1967, that view of translation suffered a blow when eleven scraps of the Abraham papyri, long since lost and believed to have been burned, were discovered in the Metropolitan Museum of Art in New York City and given to Latter-day Saint Leaders in Salt Lake City. Color pictures were soon printed and scholars went to work. The texts were thought to be the Abraham papyri because Joseph had published facsimiles from the papyri with his translation, and the same pictures appeared on the museum fragments. Moreover, some of the characters from the Egyptian grammar appeared on the fragments. The translation of these texts by expert Egyptologists would finally prove or disprove Joseph’s claims to miraculous translating powers. Would any of the language correspond to the text in his Book of Abraham? Some Mormons were crushed when the fragments turned out to be rather conventional funerary texts placed with mummified bodies, in this case Hor’, to assure continuing life as an immortal god. According to the Egyptologists, nothing on the fragments resembled Joseph’s account of Abraham.

Some Mormon scholars, notably Hugh Nibley, doubt that the actual texts for Abraham and Joseph have been found. The scraps from the Metropolitan Museum do not fit the description Joseph Smith gave of long, beautiful scrolls. At best the remnants are a small fraction of the originals, with no indication of what appears on the lost portions. Nonetheless, the discovery prompted a reassessment of the Book of Abraham. What was going on while Joseph “translated” the papyri and dictated text to a scribe? Obviously, he was not interpreting the hieroglyphics like an ordinary scholar. As Joseph saw it, he was working by inspiration – that had been clear from the beginning. When he “translated” the Book of Mormon, he did not read from the gold plates; he looked into the crystals of the Urim and Thummim or gazed at the seer stone. The words came by inspiration, not by reading the characters on the plates. By analogy, it seemed likely that the papyri had been an occasion for receiving a revelation rather than a word-for-word interpretation of the hieroglyphs as in ordinary translations. Joseph translated Abraham as he had the characters on the gold plates, by knowing the meaning without actually knowing the plates’ language. … When Chandler arrived with the scrolls, Joseph saw the papyri and inspiration struck. Not one to deny God’s promptings, the Prophet said what he felt: the papyri were the writings of Abraham and Joseph. The whole thing was miraculous, and to reduce Joseph’s translation to some quasi-natural process, some concluded, was folly.

The peculiar fact is that the results were not entirely out of line with the huge apocryphal literature on Abraham. His book of Abraham picked up themes found in texts like the Book of Jasher and Flavius Josephus’s Antiquities of the Jews. In these extra biblical stories, Abraham’s father worshiped idols, people tried to murder Abraham because of his resistance, and Abraham was learned in astronomy – all features of Joseph Smith’s narrative. Josephus says, for example, that Abraham delivered “the science of astronomy” to the Egyptians, as does Joseph’s Abraham. The parallels are not exact; the Book of Abraham was not a copy of any of the apocryphal texts. In the Book of Jasher, Abraham destroys the idols of King Nimrod with a hatchet and is thrown into a furnace; Joseph’s Abraham offers no violence to the idols and is bound on a bedstead. The similarities are far from complete, but the theme of resisting the Icing’s idolatry and an attempted execution followed by redemption by God are the same. The parallels extend to numerous small details. Joseph may have heard apocryphal stories of Abraham, although the Book of Jasher was not published in English until 1829 and not in the United States until 1840. A Bible dictionary published by the American Sunday School Union summed up many of the apocryphal elements. Whether Joseph knew of alternate accounts of Abraham or not, he created an original narrative that echoed apocryphal stories without imitating them. Either by revelation, as his followers believed, or by some instinctive affinity for antiquity, Joseph made his own late-and unlikely-entry in the long tradition of extrabiblical narratives about the great patriarch.