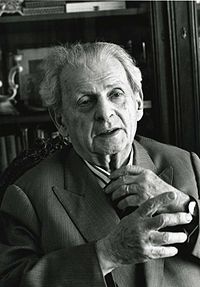 Emmanuel Levinas was a Lithuanian Jew who lived from 1906 to 1995, and studied under some of the most influential thinkers in Europe. He later moved to France and authored one of the most exciting and original philosophies of the 20th Century (at least, that’s how I see it). Levinas introduces a whole new language for talking about our experience of the Other. Because this is a new way of talking about things, this post may not be as crystal clear as other posts. Not everything in Levinas’s worldview translates into plain English. However, I believe that this new way of talking about the world can lend valuable insight into the experience of being a human among humans.

In Contrast with Western Philosophy

A perfect example of this Western way of thinking is in the scientific discipline. Scientists observe change in the world—be it objects falling or creatures evolving—and attempt to discover the unchanging principle to account for that change. For example, they develop a law of gravity to explain why things fall, and thus all the many instances of falling objects can be explained by the one law of gravity. They also formulate the law of natural selection to explain why creatures evolve. Both these laws are considered unchanging and static. Because these principles never change, scientists assume that they are more fundamental than what does change.

We can see that this idea of truth is everywhere in our society. Of course, this does not perfectly capture the thoughts of all Western philosophers. There are many variants and deviations from this worldview. This, however, is the general perspective that Levinas responds to in his writings.

Reducing the Other to a Totality

This is the point at which we introduce a new way of talking about things. Levinas claimed that there are two ways to know the world, or two ways that we can approach a phenomenon. Another way to say this is that there are two ways that we can know what is Other. The first way of knowing the world is the way that Western philosophy has adopted since its beginning. In order to describe this way of knowing the world, it may be best to use a metaphor. Consider a fruit, like an apple. The apple, upon first encounter, is not part of me; it is something other than me. However, when I eat the apple, it then becomes a part of me. When we consume food, we make it part of us, or part of the Same.

According to Levinas, Western philosophy does the same thing when it encounters the Other. It makes sense of the Other in a way that turns it into the Same. It dissolves the otherness of the Other by reducing it to the Same. When we describe the Other in words or abstractions, we turn it into something that we can grasp, understand, encapsulate in words, and remake it in our own image. We use the idiomatic phrase, “I get it!” or, “I’ve got it!” to describe the way we know the phenomenon we’ve encountered. We thus take possession of the Other, and it thus becomes part of us. We become masters of the Other, because the Other has surrendered to us and has lost its alterity. The word alterity means “the state of being other, or different.” “Percieved in this way,” said Levinas, “philosophy would be engaged in reducing to the Same all that is opposed to it as other.” In essence, the goal of Western philosophy is to turn that which is alien into that which is familiar. Levinas continued, “Western philosophy coincides with the unveiling of the other in which the Other … loses its alterity. Philosophy is afflicted, from its childhood, with an insurmountable allergy: a horror of the Other which remains Other.”

There are many experiences that are perfectly compatible with this way of knowing the world. For example, descriptions of how things fall, mathematical principles, even bacterial infections are encounters with the world that are not distorted when enframed into a Totality. They are phenomena that we can explicate entirely in terms that are familiar to us, and that we can assimilate into a framework of familiar laws and principles. Consider an example: a scientist has succeeded at his work if he can explain how a new phenomenon is really just another manifestation of an already established scientific law. This is what it means to turn the Other into the Same.

Approaching the Other as the Infinite

However, there are many experiences where this process of subsuming the Other does distort the reality of the Other. For example, people are foremost and always an irreducible Other that must be approached differently. The second way Levinas said that we can know the world can be illustrated with another metaphor. Like the apple, when we drink from a spring, that which we drink becomes a part of us. But unlike the apple, we cannot drink all of the water that flows from the spring. Not only is there more to the phenomenon than we can consume, but there will always be more than we can consume, because it is an inexhaustible source. Thus, the Other is not something that we can encapsulate in words, take possession of, or make part of ourselves. There will always be something genuinely and irreducibly Other about it.

Levinas said, “The relation with infinity cannot, to be sure, be stated in terms of experience, for infinity overflows the thought that thinks it.” Let’s consider another example: when we think of the ocean, we have an idea what the ocean is and what it is like. However, there is always more about the ocean that we do not know. There will likely always be more in the ocean than what we know. Perhaps an even better metaphor is an idea of the cosmos: no matter what is contained in our idea, the reality of the cosmos is inexhaustible. It can never be fully encapsulated into words. The reality of the infinite will always be able to shatter whatever conceptions we make about it. We can never make the Infinite into a Totality. It can never be fully consumed, tamed, mastered, or made a part of us. In this mode of approaching the Other, we cannot make the Other into the Same. The Other is always in flux, because of its inexhaustible nature.

Because people are foremost and always an irreducible Other, they escape any attempt to reduce them into a totality or to make them into the Same. C. S. Lewis wrote that when his wife died, he would remake the images and memories he had of her in his own image. He said, “Although ten minutes—ten seconds—of the real Helen would correct all this, the rough, sharp, cleansing tang of her otherness [was] gone. … The reality is no longer there to check me, to pull me up short, as the real Helen so often did, so unexpectedly, by being so thoroughly herself and not me.” This experience shows that there is something about the Other that is always in flux, that will always shatter whatever conceptions we form about it, that is inexhaustible in its presence as a spring of water. C. S. Lewis described God in a similar way: “My idea of God … has to be shattered time after time. He shatters it Himself. He is the great iconoclast. Could we not almost say that this shattering is one of the marks of His presence?” Levinas described this shattering as the other’s face: “The way in which the other presents himself, exceeding the idea of the other in me, we here name face. … The face of the Other at each moment destroys and overflows the plastic image it leaves me.” In other words, the Otherness of the Other cannot be made perfectly familiar without destroying its alterity.

For example, when we categorize another person in terms of a stereotype, we are attempting to turn the infinitude of the Other into a set of ideas that are familiar to us. Rather than allowing the Other to constantly shatter our ideas about it, we are simply trying to turn the Other into the Same. This is a form of violence against the Other. Metaphorically, it is like pinning butterflies to a board. Sure, they’ll never violate our expectations, but they are also no longer living. The same thing happens with people when we are racist or when we stereotype them: we make sense of all their Otherness in terms of our expectations of them, and they no longer surprise us. However, they are also no longer living (at least, in the way we approach them).

We see here a contrast between two different approaches: The reducing of the Other into a Totality, and the reverent approaching of the Other as the Infinite. Emmanuel Levinas worked to rupture the way we make sense of the world, to question the assumptions we make, and to create space for the second way of approaching the Other. According to Levinas, the reduction of what is infinite and Other to a totality and the Same is sometimes, if not often, a lesser and destructive method that mangles the phenomena we seek to understand. Human beings are inescapably an Infinity, not a totality. We see this in the way we approach others. When we approach people as a totality, we can mask the genuine Otherness of those around us. It is the cleansing tang of the Otherness of people that “pulls [us] up short,” and pulls us into obligation to acknowledge their humanity.

17 thoughts on “Levinas and Two Ways of Approaching the World”