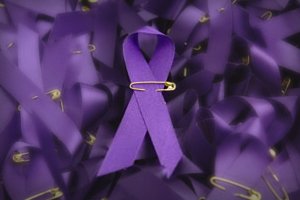 Today, I am wearing a purple ribbon. Two years and eight months ago, my husband left me. It was not unexpected. He had threatened to leave me many times. This time was different. This time, he had told me weeks ago he was planning to leave me, and this time I had decided to let him go. I couldn’t continue trying to do everything I could to keep him. This time was also different because this time, three months pregnant and constantly nauseous, I refused to leave the house to give him some alone time with his movies. This time, he decided to try to make me leave by grabbing me around the waist, dragging me across the living room, and trying to force me out the door in front of my two-year-old daughter.

But what I lived through that night was physically quite minor, and it was the first and last time he put his hands on me in anger. I am not wearing the purple ribbon for me. I am wearing it for the three women and one man who will die today because of intimate partner violence. I am wearing it for the more than 20,000 people this year who will be hospitalized because the one person in their lives who should cherish them the most believes that frightening them, and even hurting them to get what they want is acceptable.

I am wearing a purple ribbon for the more than 2 million people per year who call a domestic violence crisis line. For the 3.3-10 million children who stand by helplessly as their mother gets beaten, angry not at the abuser, because that would be dangerous, but at themselves for not stopping it. I’m wearing it for the countless others who suffer in silence behind closed doors. Those who wait to cry until their partner leaves the house. Who know how to hide tears, or apply makeup to hide bruises. I wear it for those who are afraid that if they do the wrong thing, say the wrong thing, their partner will be angry with them. Who have walked on eggshells so long, they can no longer feel the cuts on their feet.

I wear it for those who do not even know that it is not normal to live in fear. 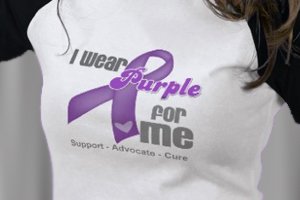 What I have lived through is nothing. But it has shown me that the fault for domestic violence does not only rest on the heads of the abusers. It rests on every single one of us who decide that it is better to not get involved until we are “sure” that what is going on is abuse. It rests on the shoulders of each one of us who wonders, but never asks.

Please, please educate yourself. Open your eyes. One of every four women you know has experienced domestic violence in her life.

You want to cut the government budget? Take personal responsibility for the emotional abuse that permeates our lives, the abuse that the government can do nothing about. If we stop looking the other way, if we stop shutting doors against the women and children who silently cry for help, if we stop validating abusers in an attempt to “be fair,” we will stop the physical violence. No abuser beats his wife or girlfriend before making sure that she is emotionally ready to accept it. No abuser throws things at her husband’s or boyfriend’s head, or pulls out a knife or gun, without feeling that she can get away with it.

October is National Domestic Violence Awareness Month. Now is the time to do something about the millions of people who suffer at the hands of someone they love. Until this is stopped, our hands are not clean, and the hearts of the victims of domestic violence will continue to plead, “What is wrong with me? Is there no one who can help me?”

46 thoughts on “Just a Purple Ribbon”