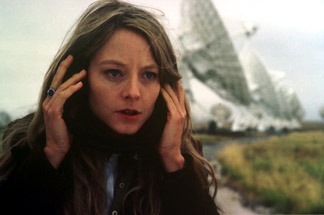 One of my favorite movies is Contact, based on a novel written by Carl Sagan. One reason I like it is that it makes such important statements about how we come to know things. (Spoiler alert: Those who haven’t seen the movie and would not like the plot spoiled for them should not read this post.)

The movie is about a woman named Eleanor Arroway (Ellie) who is an astronomer working for the SETI program (Search for Extraterrestrial Intelligence). She scans the stars using radio telescopes, looking for radio signals from other planets that may be communications from intelligent life outside the solar system. Ellie is an atheist (or at best, an agnostic); she does not find any compelling evidence to believe in God. She refuses to believe in anything unless she is shown public, replicable, and verifiable evidence. She does not feel that there is enough evidence to warrant belief in a Supreme Being.

Ellie befriends a man named Palmer Joss, who is a theologian and a humanitarian specialist who writes books about the lack of meaning in our lives. He finds it remarkable that despite an increased standard of living and incredible technology, we feel so much more distant from each other and still search for the meaning that is absent in our lives. At one point, he shares his conversion experience with her. He describes his troubled childhood and his first experience with God:

Joss: I had … an experience. Of belonging. Of unconditional love. And for the first time in my life I wasn’t terrified, and I wasn’t alone.

Ellie: And there’s no chance you had this experience simply because some part of you needed to have it?

Joss: Look, I’m a reasonable person, and reasonably intelligent. But this experience went beyond both. For the first time I had to consider the possibility that intellect, as wonderful as it is, is not the only way of comprehending the universe. That it was too small and inadequate a tool to deal with what it was faced with.

Ellie confesses that she can’t believe in his experience without the ability to replicate or verify it. Without publicly verifiably evidence, she has no grounds for belief.

Soon Ellie discovers a signal from a neighboring star called Vega. The signal transmits a series of prime numbers (a phenomenon that cannot be naturally explained), with frequencies containing instructions for building a massive machine. Ellie and a group of scientists discover that the machine is designed to transport one person by unknown means to an unknown location.

Eventually she has an opportunity to use the machine, as a representative of the human race in its first contact with extraterrestrial intelligence. The machine works; Ellie is transported through a wormhole to another world, where she meets an alien being who appears to her in the form of her long-deceased father, on a beach setting recollected from her childhood. The aliens had downloaded her memory and created a setting that would be not only familiar but familial to her. They tell her that only she would be able to visit, and that in time her race would find its way to the stars. This was just one small step, and the next step would have to wait. This, they said, was the way it has been done for billions of years.

Ellie is transported back to earth, where she is stunned to learn that, by earth time, she was gone for only a fraction of a second. In fact, nobody thinks that she even left; they are busily trying to figure out why the machine malfunctioned. Ellie insists that the machine worked fine, that she had contacted alien life, and had been gone many hours. However, every scientific instrument in the room indicates that nothing significant had happened. Even her personal recording device showed only static.

The following video clip shows the subsequent inquiry, during which Ellie is interviewed/interrogated about her experience.

For those who can’t get the video to work, Ellie is asked if she can prove that her experience was real, to which she replies that she cannot. She is asked,

Dr. Arroway, you come before us with no evidence. No records, no artifacts—only a story that—to put it mildly—strains credibility. Over half a trillion dollars was spent, dozens of lives were lost. … Are you really going to sit there and tell us that we should simply take this all on faith?

The chairman of the committee presents a compelling alternative account of Ellie’s experience and discovery. He attributes the whole discovery to an elaborate hoax prepared by S. R. Hadden, an eccentric and incredibly wealthy man who not only funded Ellie’s SETI research, but also owns, as subsidiaries, the Japanese subcontractors who were paid to develop and build the machine. It seems that Hadden was made incredibly wealthy and famous by Ellie’s discovery, and thus had a strong motive to fake the extraterrestrial communication.

Ellie admits that there are other explanations for her discovery and her experience, that perhaps she had a delusional episode, and that possibly the whole machine was a hoax. She said, “As a scientist, I must concede that, I must volunteer that.” The chairman of the committee then asks, “Then why don’t you just withdraw your testimony and concede that this journey to the center of the galaxy in fact never took place?” To this, Ellie emotionally responds,

Because I can’t. I had … an experience. I can’t prove it. I can’t even explain it. All I can tell you is that everything I know as a human being, everything I am—tells me that it was real.

I was given something wonderful. Something that changed me. A vision of the universe that made it overwhelmingly clear just how tiny and insignificant—and at the same time how rare and precious we all are. A vision … that tells us we belong to something greater than ourselves … that we’re not—that none of us—is alone.

I wish I could share it. I wish everyone, if only for a moment—could feel that sense of awe, and humility … and hope. That continues to be my wish.

Conviction Based in Experience

Traditional empiricism holds that the only experiences that are reliable are those that are publicly verifiable and replicable. However, despite the fact that Ellie’s experience was private, personal, non-replicable, and non-verifiable, she chose to trust it nonetheless. Ellie had discovered exactly what Joss was trying to convey earlier in the film. She even borrowed Joss’s own words as she tried to describe her experience. Some experiences cannot be proven, only reported. Some experiences can completely change us, and we can’t communicate that change in words; we can only invite others to seek their own life-changing experiences.

Bruce R. McConkie said, “The scriptures have many references to revelation. The prophets have said much about it. What it means to us is that we need religious experience. We need to become personally involved with God.”1 We need, he said, to seek experiences with God, of which we can then testify and report to others. I would like to invite everyone to seek for their own, personal, lived experience with God. If you have not experienced an encounter with the divine, I invite you to continue to seek that experience. Each of us can pray as the king of the Lamanites did, and say, “If there is a God, and if thou art God, wilt thou make thyself known unto me?”

As a Christian and a Latter-day Saint, I do not base my convictions on logic or reason. I had … an experience. I felt the witness of the Holy Spirit testify to my heart that God is real, and that Jesus Christ is His son. I base my convictions not on logic, reason, or public evidence, but on experiences that I have had. I’ve had experiences that I feel compelled to describe as divine communications. There was a time in my life that I can only describe as a daily conversation with God. Today, communications from Him seem few and infrequent. However, I trust that He is real, because He has spoken to me through the voice of His Spirit. And He has spoken to millions of others. And I continually, daily, seek to converse with Him more.

As you seek experiences with God, I can’t promise that God will reveal Himself immediately, nor can I tell you exactly how He’ll do it. But I personally believe that if you are persistent, He will reveal Himself, and that you too will be able to say that you have had a personal, lived encounter with God. And I personally believe that these don’t need to be singular, rare experiences. For many, developing a relationship with God can involve consistent, frequent contact with the divine. However, there is no “one size fits all” pattern of religious experience, or on how to obtain it. But I believe that there is one God, and that each person who communicates with God is communicating with the same divine being, so there will likely be some commonalities amongst our religious experiences. In the end, though, each person’s relationship with God is unique, and will manifest itself in unique ways.